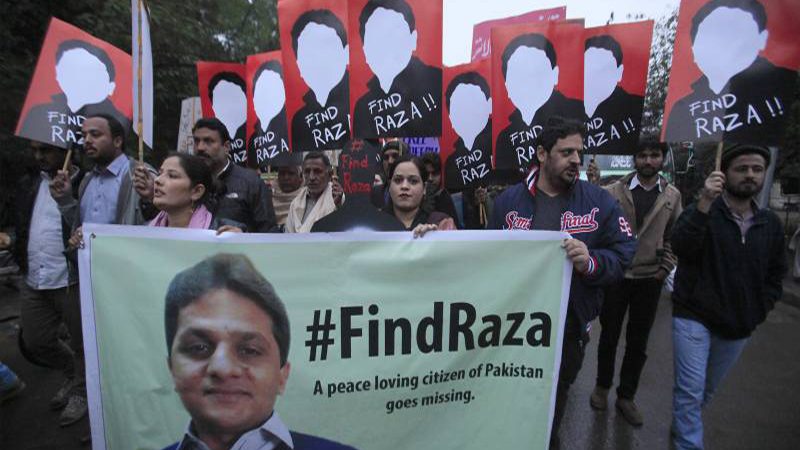 LAHORE: A large number of civil society and peace activists held a protest demonstration for raising voice against disappearance of activist Raza Mehmood Khan since December 2. Protesters at the Lahore Press Club demanded the state to find Raza Khan and ensure his safe return.

An 8-year-old student of Grade 4 from DPS – Sachal Nadeem – also joined the protest who was youngest protesters. He talking with Daily Times said that the state must ensure release of “Raza uncle”.

“He is not involved in any bad activities but he was doing a good job for the promotion of peace in the county.” Social activist Diep Saeeda said that we are peaceful people and we cannot do anything except to record protest in favor of our missing activist friend. She said that we appeal to the state and prime minister of Pakistan to find the missing activist and present him before the media and the court. She said that Raza was doing work with her for the last 10 years but she never witnessed any negative habit in him, especially against sovereignty of this country. She said that we have knocked the door of High Court and filed petition on this matter.

She said, “According to police investigation, he is not in the custody of any civilian institution.” She has shown satisfaction on the police cooperation with them in this matter. She said that it came into our knowledge that police have received CCTV footage of Raza’s kidnapping but they did not share it. She said that it was understood that the agency had arrested Raza but we are not clear which agency of this state has kidnapped him. We will continue our struggle for his recovery and record protest in Islamabad and Karachi in next phase. She said that we will hold protest in front of Pakistani Embassy in Washington next Friday.

Farooq Tariq said, “I’m here to protest against the abduction of Raza Mehmood Khan, who was missing since December 2.” He said that such abduction is becoming a normal practice in Punjab, as earlier six bloggers were abducted. Raza is a social worker and peace loving person, who is talking about peace between India and Pakistan and bringing young students of both countries together. Who picked up Raza we do not know, but we say that it is the responsibility of the state to recover him as soon as possible. To a query, he said that we doubt may be some state agencies are involved in this matter but we have no proof.

Civil society activists said that after multiple meetings and support from the police, we are clear that Raza Khan’s case is that of enforced disappearance. But family and colleagues who know him very well still cannot comprehend the reasons why the state would break its own laws, trample citizens’ right enshrined in the constitution. Protesters said that we are concerned for his safety, hope and pray that he has not been tortured and demanded his safe return. Raza’s brother Hamid Nasir also filed a habeas corpus writ in the High Court, so they the state presents him in court and takes a legal channel to try him if he has done something against the law. But, as peace and social activists, academics and artists, we don’t understand why the state has adopted the enforced disappearance method. This practice has created a sense of insecurity among the people and has adversely impacted our beloved country’s image across the world. Further, multiple protests have already happened in different parts of the country as well as in London. We believe that the state’s modus operandi of enforced disappearance should stop now, not just because it is illegal but also because it is the worst possible strategy that hinders Pakistan’s path to progress and development.