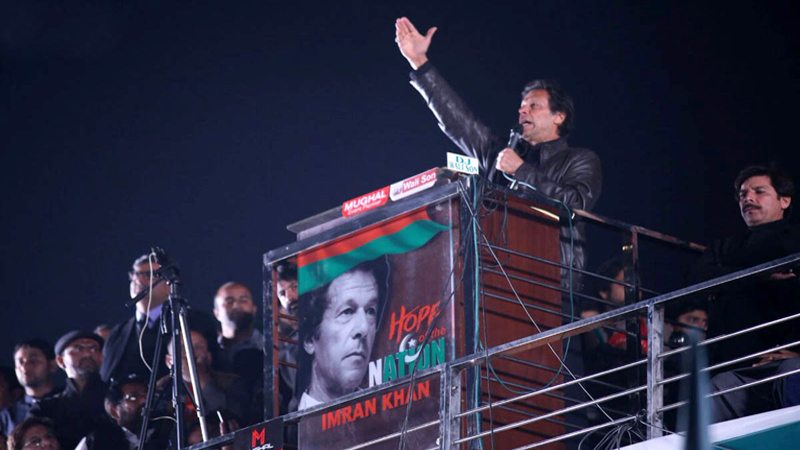 SHEIKHUPURA: Pakistan Tehreek-e-Insaf Chairman Imran Khan has said that once in power his party will not spare former National Accountability Bureau (NAB) chairman Qamar Zaman Chaudhry until lands in jail.

Addressing a rally in Sheikhupura as part of the PTI’s mass contact campaign on Sunday, Imran claimed that the former NAB chief was a “hurdle” to true accountability and saved many culprits. “Wherever you go we will bring you to the task… you are a nation’s criminal,” said Imran Khan.

The PTI chief said that Hudaibiya case would prove to be disaster for the Sharif family. He claimed that PML-N’s days were numbered. He also lashed out at Sheikhupura’s deputy commissioner for “not providing the stadium for public meeting, mocking him as Shahbaz Sharif’s errand boy”.

He went on say that those who had labelled him as an agent of Jewish lobby were the ones who tried to amend the Khatm-e-Nabuwwat clause to please their ‘Western masters’.

Referring to Human Rights Day and the grave violations of human rights in India, he said, “Modi wants to make India a place only for Hindus.”

Taking a jab at Indian prime minister, Imran said that all the minorities in India were deprived of their basic rights. “Muslims are being killed in India just for selling cow meat.” He also asked Pakistanis to make sure the safety for all minorities, including Hindus, living in Pakistan. Every citizen should be given equal opportunity to take part in the struggle for “change” in the country, he added.

Imran’s wrath did not even spare Pakistan Cricket Board (PCB) Chairman Najam Sethi, who he said was responsible for the defeat of Pakistan at the hands of Afghanistan in the final of Under-19 Asia Cup. “A person, who was responsible for rigging the 2013 election, has been appointed the chairman of the Pakistan Cricket Board (PCB).” He added that he [after being in power] would make Pakistan a “superpower of cricket” again.

Before the PTI chief’s speech, Awami Muslim League leader Sheikh Rasheed addressed the gathering and gave a time-frame for the fall of the ruling Pakistan Muslim League-Nawaz, saying “Their government will end within Dec 11 to March 11.”

Officials said more than a 1,000 police personnel were deployed to cover the event, where enthusiastic party supporters had amassed.

On Friday, Imran had said his party would support Pakistan Awami Tehreek chief Tahirul Qadri until it gets justice in the Model Town incident. Imran alleged that the Sharif brothers were responsible for the death of 14 people.

It might be mentioned that the PTI and Pak Sarzameen Party had also joined PAT in its call for the resignations of the Punjab Chief Minister Shehbaz Sharif and Law Minister Rana Sanaullah.