The reason behind Trump’s Jerusalem decision

For Trump, it was never meant to be a political decision. Rather, it is symbolic gesture towards his hard-core evangelical electoral base

Ignoring the warnings received during the past few days from European and Arab leaders, Donald Trump officially recognised Jerusalem as the capital of Israel on Wednesday, and ordered to begin preparations for moving the US embassy from Tel Aviv to the holy city.

Regardless of the reaction that this seemingly insane decision will garner in the coming days, we should first examine why the incumbent president of the US decided to transfer his country’s embassy to the Jerusalem, a decision which is against the general American trend and international public opinion. A recent survey made public by the Brookings Institution revealed that 63 per cent of Americans opposed the embassy move.

On the international front, the representative of the European Union warned that the US embassy move will have ‘serious repercussion’. The EU stressed the need for remaining focused on the peace process and refrain from actions that would undermine it. Meanwhile, the German Foreign Minister said that the Jerusalem issue can only be solved through direct negotiations between Palestine and Israel. Emmanuel Macron of France also registered his grave concern.

The most direct reaction to the decision from Muslim countries was registered by King of Morocco, Mohammed VI who is the chairman of the Al Quds Committee. In a letter to the American president, king Mohammed VI expressed “deep personal concern and the great concern felt by Arab states and peoples”. 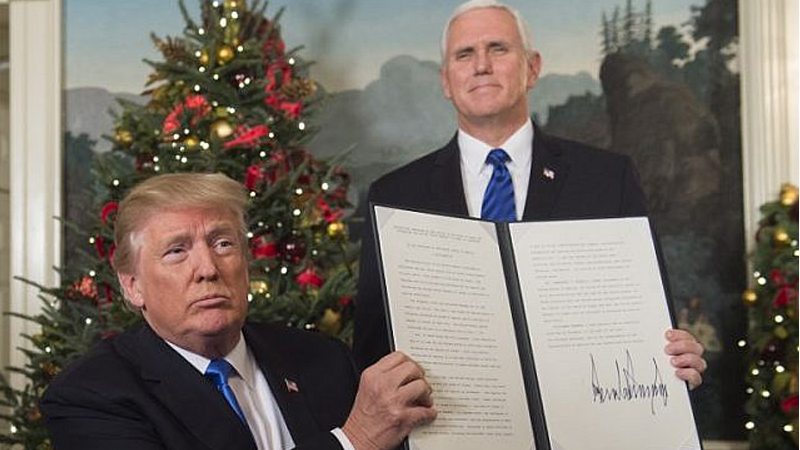 America is one of the main sponsors of the peace process and thus enjoys the confidence of both the parties. Any wrong move by Americans will alienate their biggest allies in the region who will find it extremely difficult to go against the feelings of their own people.

Contrary to the widely-held belief, Donald Trump’s decision was neither rash nor foolish. The key to understanding the US president’s action lies in the role of evangelical Christians who have shaped the Republican ideology for the past several years. Anyone familiar with the American radical right will find Donald Trump’s decision neither surprising nor erratic. In fact, Trump has meant this as a gift to his core electoral base, the evangelical Christians who are the most pro-Israeli group in America.

That is why Trump’s decision was immediately praised by the leader of the Christian American Zionists, Pastor John Hagee who declared that the president will be remembered for millennia for his courageous act.

Donald Trump’s recent decision stems from years of pro-Israel militancy within the Republican Party. Its first real triumph was the passing of the Jerusalem Embassy Act in 1995. The act stated that the US Embassy in Israel must be established in Jerusalem not later than May 31, 1999.

Trump’s decision will make sense when it is seen through the prism of prevailing republican ideology. For Trump, it was never meant to be a political decision. Rather, it is symbolic gesture towards his hard-core evangelical electoral base.

The pro-Israeli tilt of the Republican Party can be attributed to two distinct groups: the pro-Israeli Jewish lobbying groups, and the Christian Zionists. While the first group — a highly organised cluster of many different organisations — works coherently to raise money and influence US legislature and foreign policy, it does not have a wide electoral base. The other group, consisting of the Christian Zionists has a wide electoral base anchored within the 60 to 80 million Evangelical Protestants in America. There are about 3 million Christian Zionists who are able to throw sizable weight on the Republican Party.

Trump’s decision is a win-win for both these pro-Israeli groups. Since the 1980s, Israel’s defence has been firmly anchored in the political doctrine of the Republican Party. The 2000s saw a collective sense of purpose which connected and bound the pro-Israeli Jewish groups, the Christian Zionists and the American right. These three groups see Israel as a natural ally of the US. Since its creation, they have been lobbying for support of Israel at every platform available to them. Years of work has paid and now almost every evangelist Christian supports Israel.

The deep-rooted distrust of Arabs and Muslims has also played into the hands of the American right. In the currently prevailing Islamophobic environment, the Palestinians are finding themselves in a very unfavourable position. Though Christian Zionism wasn’t doing badly before 2001, but after 9/11 it has found a very fertile ground for sowing anti-Palestinian feelings in the American electorate. Evangelists have several reason for supporting Israel, religious and otherwise, but none of them is compatible with the partition of Jerusalem or the two-state solution. It seems that on December 6, 2017, they succeeded in delivering a mortal blow to both these phenomena.