Police action was delayed because of the state’s largesse to assuage the genuine concerns of some of its citizens.

There is no benign way to describe the series of events that shook Islamabad to its core. It was mindless thuggery at best and it showcased a side so dark that we shiver at the thought of what lies ahead.

The involvement of religious sentiments in the issue kept the government dithering on their plan of action. This is not the first time this inaction has cost the state its grip over affairs which should be its domain exclusively. Police action was delayed because of the state’s largesse to assuage the genuine concerns of some of its citizens. With its hands tied to its back, the police finally undertook a clearance operation which went awry and when that happened we saw government ministers taking cover behind administrative mishandling and court orders. Our self-mockery was complete.

The helplessness of the state was adequately reflected in the agreement signed to stop the madness engulfing the entire country. That it was done to prevent further anarchy was only an attempt to embellish defeat so that it could pass off as a profitable situation.

The aftermath of the operation also brought forth the tragic case Israr Tanoli, a member of Islamabad’s Anti-Terrorism squad who lost his right eye when one of the stones hurled at them hit him. He was saving a fellow FC officer who was being attacked with axes.

The news of Israr Tanoli forced me to think about how we view patriotism in our country. Who is in the wrong between those who want the constitution implemented in letter and spirit and those who masquerade their political ambitions in the garb of religion? Are the former more dangerous for the well-being of this country than public apologists for extremists, as is sometimes projected on social media?

It is hard to define patriotism for a country where citizens still lack the clarity over what it means to be Pakistani. We are still lacking in consensus over fundamental issues. For instance, so many of us are still not sure if democracy is indeed our preferred form of government.

The pen is indeed mightier than the sword but in our case the impression is that pen is shielding an entire political setup. The increasing tendency of vetting each other on the quality of our faith and patriotism is pushing us down an abyss

The dilly dallying between a political setup and the idea of an autocratic one after every few years reflects our confusion. Similarly, there is a difference in opinion in our country on the foundation of bilateral ties. For some the distinction between Friend and Foe in the international arena is only if they share the same religion as us or not.

Whereas, those more familiar with diplomacy argue that the convergence and divergence of interests should be the basis for international ties. Again, because of this disconnect a great deal of discomfort exists within the public.

Even though playing to the gallery has always been a forte of our public leaders, we have taken this art to the next level of finesse. In the past few years almost every political issue of consequence has been left unsolved until the noise surrounding it has been aggravated to the national level. 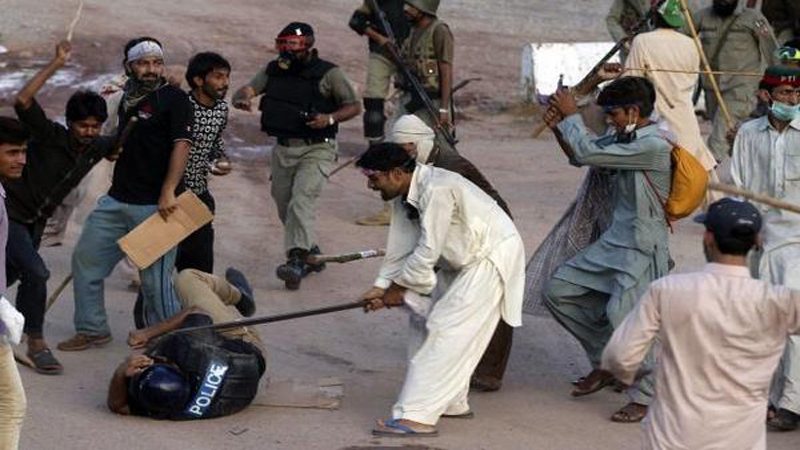 This has been helped in part with the emergence of a new class of uber-patriots on social and electronic media who have been the critical mass for generating much of this noise. In fact, these super patriots have been instrumental in establishing the political polarisation we see and experience in Pakistan today. Some of their words and actions have been so detrimental that they have systematically attacked the foundations of our country by criticising, demeaning and demonising the democratic setup and the political class. How can any political party hope for majority consensus on anything if such a level of discord is the primary characteristic of its audience?

The issue of terrorism, which is an existential threat to our country, is also where we lack majority consensus. We are still unsure of our best foot forward when dealing with extremist outfits. Sometimes the impression one gets is that to jaw-jaw is our first and last strategy to tackle extremism. This is despite the amazing feat of our armed forces to successfully dislodge all those organisations that have been illegally using our land for their gains. Allowing Islamabad to be held hostage for an extended period recently was one of those lapses of judgment which we need to overcome.

The social space for dissenting opinion in Pakistan is also shrinking every day. There is an atmosphere of fear felt by those who want to express their difference of opinion. The incumbent government does not hesitate to relieve its responsibility of saying what it should be saying onto journalists and op-ed writers.

The pen is indeed mightier than the sword but in our case the impression is that pen is shielding an entire political setup. The gray zone which is where most of our lives are spent has lost relevance in our debates and the increasing tendency of vetting each other on the quality of our faith and patriotism is pushing us down an abyss from which there is no coming back.

Pakistan needs synergy between all positive forces in the country to confront the challenges it faces on the international front, which have probably never been graver than they are at the moment. We need to fix out internal splits on priority, otherwise the grand designs of being a regional power player will remain a pipedream.

The first step to redemption is that we stop offering candy to the likes of those who laid siege on the capital and start dishing out lessons on self-control.

The writer is a professional services consultant based in Islamabad. He tweets at@raj_omer