In a country formed on the basis of religion, an analogy to Gandhism did not resound as an acclamation of political fortitude

The house of the Achakzais in Quetta resounded with the deafening sound of an explosion, bringing an end to the physical mortality of Khan Abdul Samad Khan Achakzai. He would later be buried beneath layers of mud, consummating the last rites of a body. The assassination of Khan Abdul Samad Khan on 2 December, 1973 was meaningfully contrived to eviscerate the Pukhtun right to communitarian ethnic existence determined by identity and demarcated by geography. His death should have ended what was branded as politics of ‘national’ schism. But it did not.

The following decades challenged the national idiom of ‘politics of schism’ to establish Khan Abdul Samad Khan Achakzai’s politics of identity. The chasm created by the death of Khan Shaheed, an honour awarded to the Pukhtun political leader, assumed problematic dimensions as stature, honour, trust, essential kernel of the Pukhtunwali Code, were not homogenously intrinsic to every Pukhtun. His extirpated body left a conspicuously interrogative trail demanding Balochistan’s demographic and constitutional integrity.

A deficit in political leadership might have been recovered if the politics of national schism had not privileged over politics of identity. The Pukhtun leadership was dominated by Khan Abdul Ghaffar Khan whose Edwardian colonial schooling facilitated recognition on the pre and post independence South Asian political horizon. Contrarily, Khan Shaheed’s colloquial education was a difficult obstacle to overcome, oft referred to in his memoirs. Other politicians outside the Pukhtun orbit were reverently known as ‘nationalists’, but the Pukhtun leadership’s commitment towards national politics was deliberately affixed to the Indian National Congress.

Detracting the element of nationalism from the struggle against the British Raj, Khan Abdul Ghaffar Khan, known as Bacha Khan, became the politically debatable ‘Frontier Gandhi’. And when Khan Shaheed was given the title of the ‘Balochistan  Gandhi’ his efforts to foreground the deplorable state of British Balochistan and the equally feeble existence of the Pukhtun became a cynical reference bespeaking of fealty to Gandhi than the national struggle for an independent state.

Khan Abdul Samad Khan spent a major portion of his life incarcerated, mostly in solitary confinement, for his political views. Within the confines of prison, he realised the necessity to recount the manner in which he led his life. More often than not, Khan Shaheed was denied the facility of writing material. He had to provide a written request to the authorities to access the use of pen and paper

In a country formed on the basis of religion, an analogy to Gandhism did not resound as an acclamation of political fortitude. The undeterred, non-apologetic Khan Abdul Samad Khan could forbear and respond to the euphemistic Balochistan Gandhi appellation.  But could he be supplanted by another individual who could maintain his nationalistic idiom without compromising his patriotism?

His admiration for Gandhi was deliberately perverted to propagate his newly formed party in 1938, the Anjuman-i-Watan, as an extension of the Congress party. Rumours, rife with mala fide intent, spun around the nascent party by many non-Pukhtun ‘nationalists’ tagged its creation as an attempt to stunt the politics of post-independence nationalism.

Rewarding his political struggle with largesse, the newly formed government of Pakistan arrested Khan Abdul Samad Khan on the orders of district magistrate Quetta under the Balochistan Public Safety Act. After serving six years in prison Khan Shaheed was finally released in 1954 only to be arrested yet again six months later. Charges for his arrest were neither formalised nor validated. He was the first and the last prisoner to be released after Ayub Khan’s martial law was lifted in 1968. 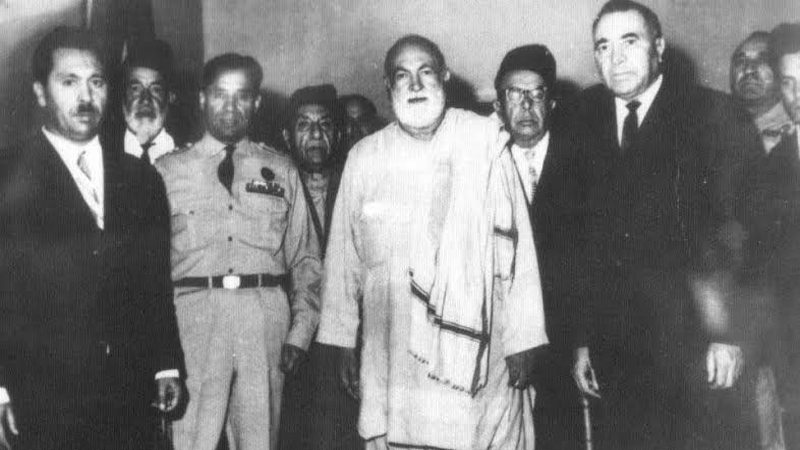 During the short span of six months of his freedom from prison, he formed Woroar Pashtun (Pashtun Brotherhood) in 1954 as a substitute for the Anuman-i-Watan. It was subsequently merged into the National Awami Party (NAP). His association with the NAP came to an end after its leadership agreed to the merger of the British Balochistan with the predominantly Pakhtun areas with four princely Balochi states as a single province of Balochistan. The political stance was the unification of all Pashtun populated areas into a single autonomous federating unit. But NAP’s decision further exposed the Pashtuns of the British Balochistan to the crisis of identity.

Prior to the general election of 1970, Khan Abdul Samad Khan formed the National Awami Party Pakhtunkhwa (NAP Pk) and contested the first general elections from its platform.

After winning a seat in the first Provincial Assembly of Balochistan, he also presided over its first session to take oath from other elected members.

After Abdul Samad Khan’s assassination Balochistan, coercively created to emasculate the historically indomitable Pakhtuns who formed 50 percent of the province’s population, lost a man personifying the quintessential Pakhtun. His replacement was not a possibility, neither at that time nor in the near future.

Balochistan lost a voice. In fact, it lost the only voice Gandhi, Nehru, Jinnah and the British were forced to listen to. Desperation by the party arose. A successor to Khan Shaheed was not possible in Balochistan and certainly not in the North West Frontier Province (presently known as Khyber Pakhtunkhwa).

A council of the party was formed to select the heir to the assassinated leader. All eyes rested on the 25-year-old Mehmood Khan Achakzai, Khan Shadeed’s son. Willingly, or more appropriately, unwillingly the young Achakzai was propelled to drape the ‘blood soaked khadichaddar’ (shawl) worn by his father embodying the solemnity of Khan Shaheed’s political bequest.

Since the death of his father in the early 1970s, Mehmood Khan Achakzai has had to navigate through the intricate web of the same suspicions woven by ‘loyalists to Pakistan’, such as his father.

Khan Abdul Samad Khan spent a major portion of his life incarcerated, mostly in solitary confinement, for his political views. Within the confines of prison, he realised the necessity to recount the manner in which he led his life. Most often than not, Khan Shaheed was denied the facility of writing material. He had to provide a written request to the authorities to access the use of pen and paper. Written under the severest conditions, he wrote his memoirs, ‘Z’ma Juwandawu Juwandun’ (The Way I lived).

The unpublished memoirs were sent to successive publishers in Pakistan , some of them well known for their contribution to democracy. All remained mum. Publishing Khan Adul Samad Khan’s memoirs would have erased the negative discourse encircling the Pukhtun nationalism. Evidently, the Pukhtun from Qila Abdullah remains formidable in death as he did in life.