From the fringes to the Faizabad interchange

I hope that the despondency and the terror that surrounded the nation’s consciousness during and in the aftermath of Faizabad sit-in persuades us that nothing much can change unless all of us, in our collectivity, consistently change it by building communities of radical equality

Let me recall that day of national shame six years ago, when the sitting governor of the Punjab province was killed by his security guard.

When the killer, Mumtaz Qadri, later appeared before the court during case proceedings, we saw dozens gathered at the venue to shower the assassin with rose petals.

It was the hanging of Mumtaz Qadri that gave the Khadim Hussain Rizvi led Tehreek-e-Labaik Ya Rasulallah its [religious] identity markers ie Namoos-e-Risalat and Khatm-e-Nubawat.

Both these slogans have the potential, that has been observed in several moments in history, to mobilise large numbers of Muslim population across class, sect, religious and political spectrums.

It was during the arrest and the hanging of Mumtaz Qadri that TLYR started organising in urban centres of Punjab and Sindh.

TLYR should have been recognised as a potential religio-authoritarian threat when among other Barelvi parties it managed to pull an estimated 100,000 gathering for Qadri’s funeral. But the government seemingly remained concerned about its right-wing vote bank.

In the last one week, we saw a legally constituted federal government, sworn to uphold the constitution, allowing Labbaik protestors to first march towards the federal capital and then hold a sit-in at the Faizabad interchange.

To add insult to injury, when the government requisitioned army in aid of civil power, the armed forces declined to assist in the resolution of the ongoing crisis — in violation of the constitution.

In the wake of the recent events, it should be quite clear that TLYR, with help of other right-wing political parties, has the potential to turn into a major force in a parliamentary front of fascism in Pakistan

The aftermath of Saturday’s operation in which a deal was brokered by the army shows where power lies in the increasingly authoritarian state of Pakistan.

Thus, the bankruptcy of the N-League government came fully into the view during the 19-day-long Faizabad sit-in. The government continuously appeased the protesters despite the orders from the court as well as Senate chairman Raza Rabbani’s notices. The government ignored all these warnings and, by doing so, it ceded more and more space to the clerics and the deep state.

The secular and radical forces of this country have reason to take comfort from the outcomes of NA-4 and NA-120 by-polls. But, lest we forget, we must also recall that TLYR managed to secure 20,000 votes in NA-4 and NA 120 combined. More significantly, it managed to did so in the span of two months since its announcement of the party’s formation and plans for elections. 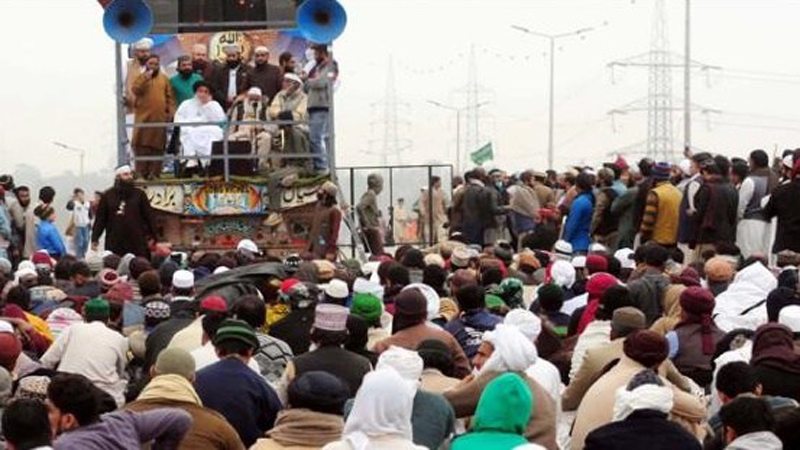 In the wake of the recent events, it should be quite clear that TLYR, with help of other right-wing political parties, has the potential to turn into a major force in a parliamentary front of fascism in Pakistan. In this regard, its following acts: the staging of the spectacle at Faizabad; the use of legal means by protesters to seek the former Law Minister’s resignation (through a petition in the court); the frequent resort to extrajudicial tactics like sermons colored with abusive language inciting violence against ordinary people, state authorities, urban intelligentsia, media personnel, and other religious clerics; the actual use of violence against law enforcement personnel; and the modes of mobilisation that leveraged modern technology and equipment like gas masks and tear gas shells against the police.

If we were to ask whether or not fascist forces are on the rise in Pakistan, my answer would be, no, perhaps not in the immediate future. But, the modes of mobilisation, and the structure and the specific ideological form in which the ‘dharna’ participants propagated and practiced politics by using identity markers like Khatm-e-Nubawat makes them a very powerful force, that can organise on a much larger scale with an articulated structure.

There are other kinds of violence that have contributed to the violent event that took place in the aftermath of Saturday operation; the most common among them is the standardisation of the tradition of violence as a way of imposing the will of the powerful on the powerless.

A society that regularly sets its women on fire in the name of honour and over issues concerning dowry and sexual infidelity, where the agrarian landlords set fire to the households of peasants, and where members of the Muslim majority community routinely engage in violence in pogrom like fashion against minorities — the presence of violence in gender, class and caste relations has already been normalised. In such circumstances, conditions are already germane for the potential emergence of the fascist or religio-authoritarian project the TLYR stands for.

I do not think that the debate about the rise of fascist tendencies is right now at the heart of Pakistani political culture. Yet, I hope that the despondency and the terror that surrounded the nation’s consciousness during and in the aftermath of Faizabad sit-in, might have persuaded us at some minimum level, that nothing much can change unless all of us, in our collectivity, consistently change it by building communities of radical equalities, as Aijaz Ahmad once wrote “so that we may then legitimately speak of a ‘Culture in Common’, ‘Customs in Common’ and yes, a ‘Nation in Common’”.

The writer is a member of the People’s Solidarity Forum