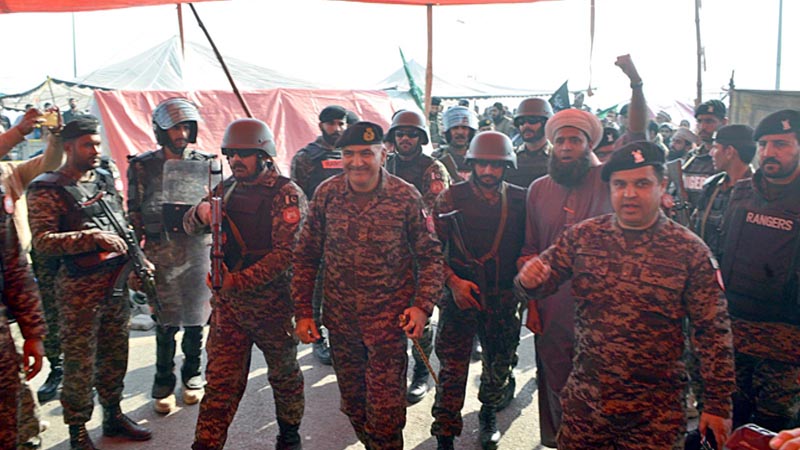 ISLAMABAD/LAHORE/KARACHI: An over three-week long sit-in by religious activists in the federal capital followed by countrywide protests that sprang up in the aftermath of a botched crackdown in Faizabad area finally came to an end on Monday after the protesting religious party announced that it had reached an agreement with the government.

Life in the federal capital as well as other major cities of Punjab, Sindh, Balochistan and Khyber Pakhtunkhwa quickly started limping back to normalcy soon after Tehreek-e-Labbaik Pakistan leader Khadim Hussain Rizvi called upon his supporters across the country to end their protests since government had acquiesced to fulfill their key demands.

The agreement was reached after Law Minister Zahid Hamid tendered his resignation “to take the country out of a crisis-like situation” which was swiftly accepted by Prime Minister Shahid Khaqan Abbasi.

The religious group had been calling for the resignation of the law minister who, they believed, was behind a hastily-abandoned amendment in the Khatm-e-Nabuwat clause in the oath of the elected representatives.

The agreement between the religious party and the government was signed late Sunday night after the military stepped in to break the impasse through negotiations.

Top civil and military officials had on Sunday decided to engage the protesters in political negotiations, discarding any options relating to use of force to disperse them. The COAS had reportedly told the prime minister at the meeting that the state should not use force against its own people. “The people of Pakistan love and trust their army. Their confidence can’t be dented for small benefits,” he had maintained, while ‘refusing’ to deploy army for operation against the protesters.

“On the assurance of Chief of Army Staff (COAS) General Qamar Javed Bajwa, we are calling off the sit-in,” Rizvi told the crowd, who occupied a main highway leading into the capital. “We have given a 12-hour deadline to the government to release all the arrested workers and meanwhile we are winding up the things to call-off the protest,” he added. However, later Rizvi refused to end blockade of Faizabad interchange until the party’s detained activists were released.

The cleric hit out at those spreading propaganda to create an impression that the group had been ‘sent by someone’ to Islamabad to create chaos and anarchy in the country. He also criticised the media for not showing his press conference live.

Routine activities in Karachi started to restore to normal after the activists of religious party called off the protest on the orders of their leader. However, a little known religious group refused to end protest in parts of Lahore despite call by Tehreek-e-Labbaik chief Khadim Hussain Rizvi.

Refusing to end the sit-in, founder of Tehreek Sirat-e-Mustaqeem Dr Ahsraf Asif Jalali said while the group’s sit-in was to express solidarity with Tehreek-e-Labbaik but was not conditional with the protesters at Faizabad. Jalali asked his workers to continue the sit-in for the third consecutive day and wait for the future course of action.

Also on Monday, the Islamabad High Court lashed out at the government as well as the army for the role assigned to the military as ‘the mediator’ in the agreement to end the sit-in in Islamabad. The army chief instead of following the orders of the chief executive became a mediator, pointed out Justice Shaukat Aziz Siddiqui as a hearing into the Faizabad protest was underway at the high court. “Who is the army to adopt a mediator’s role?” inquired the judge. “Where does the law assign this role to a major general?”

“Most alarming is that Maj Gen Faiz Hameed put signature as [the] one through whom [the] agreement was arrived at,” the order says. “It is also very strange that the efforts of Gen Qamar Jawed Bajwa, Chief of Army Staff, have been acknowledged in the words: this entire agreement was reached through the efforts of the army chief and his representative team.”

The order notes that the role assumed by the army chief is ‘besides the constitution and the law of the land’.

The court also directed the chief commissioner to submit a report regarding the Islamabad operation and reasons for its failure.