Pakistan and the Golden Crescent

Afghanistan is accountable for around 80 percent of the world’s heroin. Half of this makes its way to the international market via Pakistan

Pakistan, along with Afghanistan and Iran, comprises what is known as the Golden Crescent. This is one of Asia’s most notorious opium drug routes in terms of both production and trafficking. According to a recent report by the United Nations Office on Drug Crime (UNODC), things are not looking good. The latter has found that landmasses in Afghanistan used to produce opium increased by a whopping 63 percent in 2016; going from 201,000 hectares in that year to some 328,000 hectares for 2017. Opium poppies are now grown in 24 of 34 Afghan provinces.

With the majority of drug-related activity occurring in the south, close to shared borders with both Pakistan and Iran. This should come as no surprise. Afghanistan, after all, is the world’s largest producer of illicit opiates. It is accountable for around 80 percent of the world’s heroin. And roughly half of this makes its way to the international market via Pakistan; with large amounts being dropped off in that country along the way.

Pakistan needs to revise its approach to drugs. Presently, policies designed to tackle trafficking and abuse tend to focus exclusively on punishment. And now the BHC has directed random drug tests on all students. Yet all the while the federal capital is overrun with wild cannabis

The challenges therefore remain immense. An Afghan farmer, for example, can earn six times the amount of sowing wheat by cultivating opium. Although this ratio is said to fluctuate a little every year — there is no denying that the illegal drug trade is far more profitable than that of cash crops, which lack psychoactive properties. It is thus little wonder that opium production comprises half of Afghanistan’s total agricultural output. But depending on where our Afghan farmer is located, he could well be taxed by the Taliban, the TTP, ISIS as well as local warlords. Or, indeed, by anyone else who happens to hold the area where the poppies are. Back in 2016, the opium trade ‘earned’ the Taliban a cool $3billion in revenue. And this only set to increase by the year’s end.

So what exactly is being done?

Sadly, the lack of progress in crushing this illegal drug trade is now verging on the farcical. For even though poppy eradication was up by 111 percent last year — Afghanistan still managed to increase landmass for opium cultivation by 127,000 hectares. The thing is that the futility of targeting drug routes alone has been well documented. In the US, the supply of ephedrine and pseudo-ephedrine (which are pre-cursor substances for crystal meth) was cut in a move aimed at curbing manufacture of the latter. Yet this had entirely the opposite effect, with supplies of crystal meth experiencing a boom. This is because drug cartels in Latin America swooped in to fill this gap in the market. Thus they started manufacturing meth in Mexico and on an industrial scale. And this now far more potent drug was smuggled into the US in far greater quantities.

Pakistan has experienced a somewhat similar fate. The country was officially poppy-free back in 2011. But this was not to last. Today, we are home to more heroin addicts than ever — because the drug lords across our western border only see dollar signs, and not the human devastation of addiction. Regrettably, the media hasn’t proved too serious in taking this issue up; aside from the odd bit of sensationalist coverage that only risks further marginalising users. It is estimated that Pakistan has around seven million of these addicts. Of these, three million are said to be hooked on prescription drugs. Though it must be pointed out that this is quite possibly a conservative estimate given that prevailing stigmas associated with this kind of illness stop many from coming forward to seek the help they need. Meanwhile, the country has around only 80 drug rehabilitation clinics (not counting those run by private NGO’s). In 2015, the Senate Standing Committee on Interior and Narcotics Control found that 700 people die each day because of drug-related complications. This is a much higher number than those killed in acts of terrorism here in Pakistan each year. However, connections between drug trafficking and terrorism cannot be overlooked. 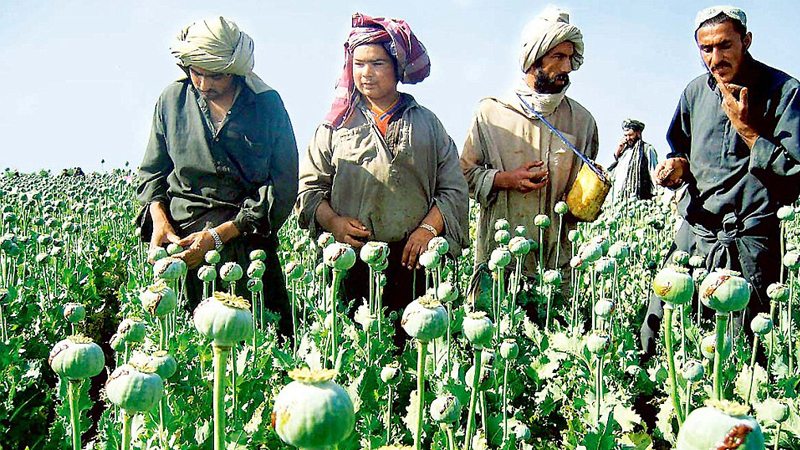 Peshawar, Quetta and Karachi are the three urban centres hardest hit by heroin addiction. The first two represent major transit routes for drugs entering into Pakistan from Afghanistan. Karachi, by contrast, is a major transit route for drugs leaving this country for international market. Semi-conscious addicts crouching under bridges and on footpaths, smoking heroin and opium from tin foil have become a common sight in these cities.

And there is a direct correlation between what may be termed an addiction epidemic and ever increasing violence and crime rates. Interviews with some of the aforementioned reveal that many became users when they were just seven or eight-years-old.

However, most of those who are today hooked on opium first started out on cannabis. Which raises an important question as to why, when the latter has been proved to be far less harmful or addictive than legal highs like tobacco or (in other countries) alcohol, is this happening. Yet this may be put down to a lack of awareness, whereby users mistakenly believe that all drugs are the same.

A first step towards tackling the problem of addiction here in Pakistan is to perhaps revise the way we deal with it. Presently, policies designed to tackle drug trafficking and abuse tend to be centred exclusively on punishment.

In other words, law enforcement agencies target users while also remaining focused on arresting small-time dealers, who represent nothing more than interchangeable links in the grand scheme of things. At most, Pakistan confiscates no more than a tonne of heroin a year. And now it seems that our education institutes will soon be following in the footsteps of our LEAs. Back in June of this year — the Balochistan High Court directed the provincial education department to conduct random drug tests on all students, male and female, and to ‘take action’ against those found to have suspicious substances in their bloodstreams.

Of course, such an approach is deeply flawed. Not only does the BHC need to define what it means by ‘take action’ — this smacks of yet another case of harassing drug users in the hope that they will clean up their act all by themselves. And all the while the federal capital appears to be overrun with wild cannabis (known as bhang).

Thus what is needed are educational programmes designed to give in-depth and honest accounts of the various drugs that are becoming increasingly widespread here in Pakistan and the harm they cause. Yet caution is naturally needed. Meaning that in trying to ‘sell’ cannabis as equally addictive and ravaging as heroin or crystal meth will not work. It will simply give users even more reason to distrust the men at the top. Decriminalisation of drugs would perhaps go a long way to reducing prevailing stigmas; thereby integrating users back into the mainstream. Of course, this is but a distant dream in a country where the religious right seems to be gaining more influence day by day.

The writer is a staff member at Daily Times. He can be reached at wasayibrahim@gmail.com