The GOP tax plan could be the death of Prop. 13

After a shellacking at the polls on Tuesday, Republicans might not need any new reasons to abandon their unpopular tax overhaul. But here’s one more: It could lead California to finally dismantle Proposition 13, one of the state’s last remaining GOP accomplishments.

The federal tax plan, introduced by House Republicans last week, was carefully constructed to penalize Americans who live in Democratic-leaning states. It would repeal the state and local tax deduction, which 1 in 3 Californians use. And it would cut in half the deduction for mortgage interest, capping it at $500,000 for new loans. This change would hardly affect most of the country – less than 3% of all homeowners carry over half a million in mortgage debt – but it would bite places like New York and California hard because of their expensive real estate markets.

California’s endangered GOP lawmakers have been remarkably muted about the pending assault on their constituents. Only one, Darrell Issa of Vista, has come out against the tax bill. Meanwhile, East Coast moderates have negotiated a compromise that would simultaneously help their states and make California the biggest loser.

The natural response to this turn of events would be to rebalance the revenue mix. California Democrats could offer a bargain: Lower personal income tax rates combined with a property tax rate more in line with the rest of the country. Of course, that would require voters to first repeal Proposition 13, which since 1978 has severely limited property taxes. 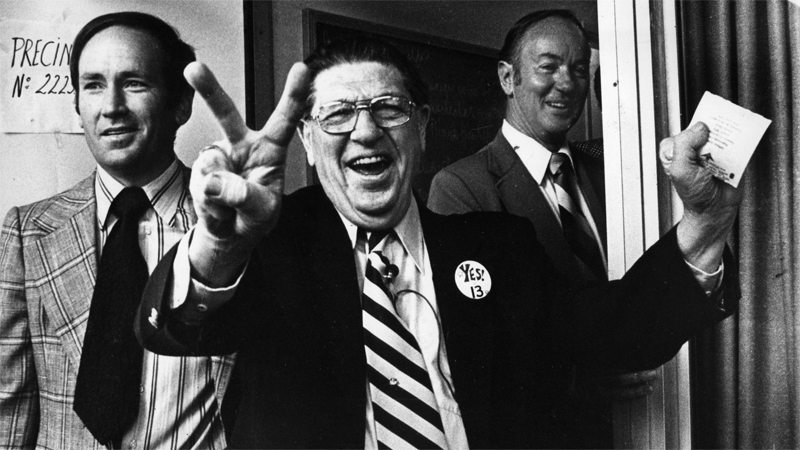 The result could be highly progressive. If income tax cuts are on the first $50,000 of income, everyone would benefit, but the main winners would be the working poor and the middle class. Plus, tax increases on property do not directly affect renters, who are, in general, lower income-earners than homeowners. (Landlords surely could pass property tax increases on to renters, but if the changes to housing taxes work as expected to actually reduce prices, the effect would be muted.)

Because property taxes remain deductible, Californians likely would save money. And the new tax system would be more predictable, less reliant on volatile income and more on home values, which outside of the historic housing bubble of the 2000s are generally more stable.

Proposition 13’s legacy has been to reward the wealthy while constraining state and local spending on key priorities like education. This has stunted economic growth and widened inequality across the state.

Proposition 13 has been a particular boon to corporations. Absurdly, manufacturing facilities or office buildings can change hands numerous times without triggering a tax reassessment because of complicated deal structuring. Freezing corporate property tax rates at 1978 levels costs California $9 billion a year, by some estimates.

Democrats have quietly discussed moving to a “split-roll” – assessing commercial and industrial properties at full market value while keeping residential property tax rates the same. But efforts to make even modest changes related to Proposition 13, like closing the reassessment loophole, always have gotten bogged down in the Legislature.

If, however, property taxes become deductible and state income taxes aren’t, that’s a flashing red signal to fundamentally change the revenue structure at the ballot for individuals and corporations alike.

Never before have Proposition 13 reformers been able to tell voters that they must fix the law to save them money. Donald Trump and his cadres of Republicans in Congress, not a caricature of tax-and-spend state lawmakers, would be the poster child; it would play out as simply cleaning up the mess created by Washington.

California voters are far more progressive than they were 40 years ago; they have consistently recommended taxing themselves to fund necessary investments. Our tax code reflects a snapshot in time from the days of Howard Jarvis, not the current public will.

If Congress makes California’s tax code massively unfair to state residents, voters will respond by agitating for change. Ironically, then, congressional Republicans could prove the catalyst necessary to end Proposition 13 once and for all.