Women and wages in Pakistan

Women around the globe earn less than men. The global gender pay gap comes to about 22.9 percent, meaning that on average, women earn 77.1 percent of what men earn.

The cascading affects of this situation reflects the situation in developing countries like Pakistan. Economic inequality is one of the leading factors of increasing gender wage gap in the country.

Conversely, it is also an acrimonious reality that the foremost threatening for economic development is growing gender inequality in the country that further instigates extreme poverty — an obstruction in the fight against gender disparity.

We live in a fortunate country in which women constitute about 50percent of the total population. If they are educated, provided health facilities and social protection and paid wages equal to those of men we can contribute significantly to the country’s overall development.

According to the analysis of Pakistan’s Labour Force Surveys for 2013-2014 and 2014-2015, the present gender pay gap of 26percent throughout Pakistan’s workforce without taking into account differences in workers’ characteristics. Pakistan consistently is performing poor in global gender report.

Women’s household work is counted nowhere in the national data. It is estimated that women carry out around 2.5 times the amount of unpaid care work that men do, and globally this work is estimated to be worth around $10 trillion

The gender wage gap persists almost in all sectors of the country. Rural women play a key role in agriculture sector and are a mainstay for growing rural farming and livestock but are not given proper wages.

According to a study conducted in 2012 shows that male agricultural workers earned 300 rupees per day while female agricultural workers earned 170 rupees per day. In addition, women earn only 32.82 per cent in skilled agriculture while men earn around 67.18 percent. Meanwhile women devote more hours per day than men. Also, the private schools mafia in small towns and urban areas pay only 200-250 rupees to women per day. 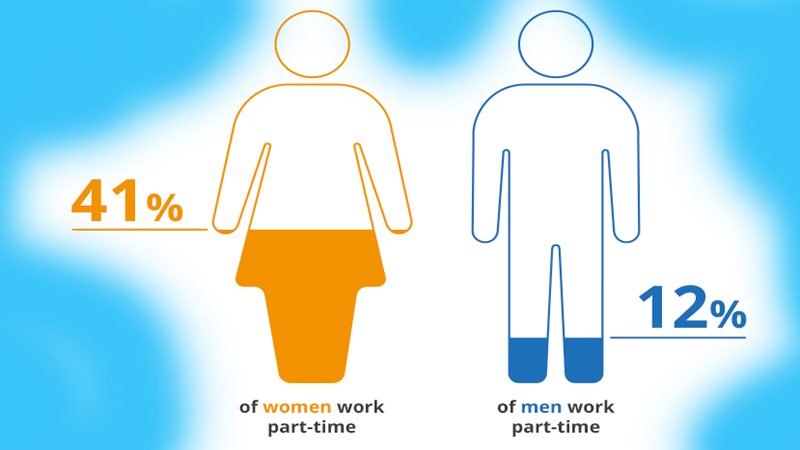 Apart from that women’s household work is counted nowhere in the national data. It is estimated that women carry out around 2.5 times the amount of unpaid care work that men do, and globally this work is estimated to be worth around $10 trillion in a year. It connotes that women endow the economy for free. Though, Sustainable Development Goal 5 adopted in 2015 by the world leaders is dedicated to achieve gender equality and empower all women and girls.

The constitution of Pakistan safeguards the right to equal pay for equal work. In addition, the1960, 1961 and 1969 ordinances clearly state there will not be any difference in the pay given to men and women. The government should have a proper mechanism to implement and then monitor those constitutional rights and ordinances.

The government ought to take note of the gender inequality prevalent in all socio-economic domains in the country. The policies regarding globalisation and emerging global trends should be enhanced as these are causing fundamental transformations in the labor force and their relationship with the market. For enabling the capabilities of women regulatory and social and economics obstacles needs to be removed. They should have the right to spend dignified and equal life.

The author is a Research Officer at Centre for Finance for Development, he possess seven years of experience in the social and economic development sector