The cruel, topsy-turvy economics of collapse 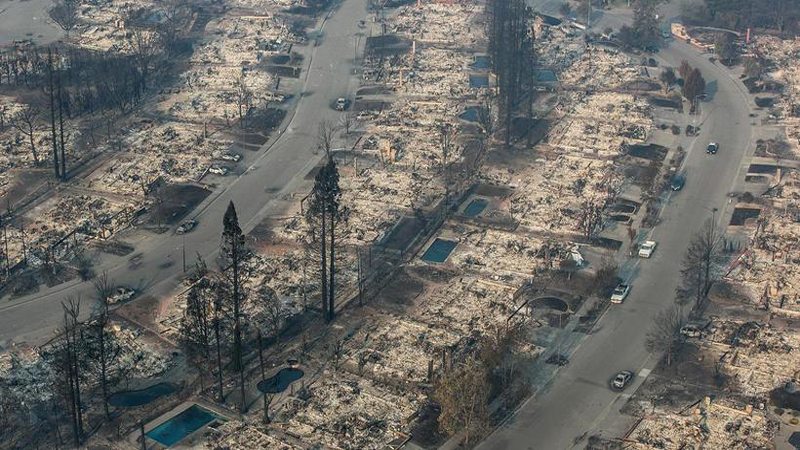 As we reel from one natural disaster after another-hurricanes Harvey, Irma, Maria, wildfires in California-climate scientists explain how they’re not really “natural” at all. They’re the anticipated consequence of a breakdown in the world’s climate, one that will become far more extreme as global temperatures rise from the current 1° Celsius above historic norms to 1.5° (perhaps within ten years) and then 2° potentially as early as twenty years from now.

With headlines proclaiming the dire effects of these disasters on local economies, it might seem reasonable to believe that the power-brokers of our economic system-investors, CEOs, Federal Reserve policymakers-will eventually recognize the danger and wield their financial might to shift our civilization’s trajectory away from climate catastrophe.

That may turn out, however, to be wishful thinking. In the short term, these disasters do indeed cause harm to the economy, but after the initial shock they’re more likely to have a net positive impact on the country’s Gross Domestic Product (GDP). In the words of US Treasury Secretary Steve Mnuchin, “There clearly is going to be an impact on GDP in the short run. We will make it up as we rebuild. That will help GDP.”

Welcome to the cruel, topsy-turvy economic logic of a civilization facing the risk of collapse. As millions of people increasingly suffer the devastation of climate breakdown, we can expect the economy-as measured by conventional benchmarks-to maintain and even strengthen itself right up to its breaking point.

The reason for this apparent disconnect between economics and society’s well-being arises from the use of GDP as the benchmark of economic success. GDP merely measures the rate at which our society is transforming nature and human activities into the monetary economy, regardless of the ensuing quality of life. Anything that causes economic activity of any kind, whether good or bad, adds to GDP.

That’s why hurricanes and firestorms, catastrophic as they may be to the people experiencing them, can be positive for the conventional economy. Devastated communities mean big profits for the companies supplying materials, technology, services, and finished goods for the rebuilding. The thousands of people in California at risk of long-term bronchial problems from smoke inhalation represent a boon for GDP, as their increased healthcare requirements only serve to boost economic activity.

This disconnect between GDP and the health of our society means that, even when things become more desperate for people as climate breakdown worsens, investors may keep enjoying high returns on their investments while neoliberal economists point to stock market valuations as proof that things are not as bad as they might otherwise seem.

This scenario has been predicted by Jorgen Randers, a member of the team that wrote the seminal Limits to Growth report back in 1972, and author of the more recent 2052: A Global Forecast for the Next Forty Years. Randers, who has spent a lifetime working through the nonlinear feedback effects of our global system, expects that we’ll be spending as much as 36% of global GDP in replacing infrastructure by mid-century. “These are huge hikes,” he writes, “and difficult to grasp, until one starts considering the cost of moving megacities and transporting infrastructure to safer grounds.”

However, this increase in GDP will only occur in countries that still have the infrastructure to rebuild what gets destroyed. For more vulnerable societies, one huge swath of destruction-from a hurricane, flood, or drought-could leave them so devastated that they find themselves permanently removed from the 21st century global technological economic matrix. That may be a real risk right now for Puerto Rico: with its electrical grid, water supply, and finances in ruins, its only hope for a return to normalcy will be through massive investment from the US mainland-something the Trump regime seems unlikely to support.

Is this what civilizational collapse may look like in the 21st century? Not one dramatic event that brings down the whole house of cards in a moment, but a gradual disintegration of regions that lack the wherewithal to recover from climatic disasters, while the more developed and affluent nations enjoy economic booms and soaring stock market valuations?

It’s not too late to turn around this terrifying trajectory, but as long as we measure a country’s success by its GDP, that’s going to mask the true destruction taking place in the quality of people’s lives. Recognizing this, forward-thinking economists have come up with more accurate measures of a country’s welfare. One of these, the Genuine Progress Indicator (GPI), incorporates negative factors such as income inequality, environmental pollution, and crime, as well as positives such as volunteer work and household work. It shows that, in contrast to GDP, which has been soaring for the past 70 years, GPI peaked worldwide in 1978 and has been falling ever since.

At this point, our society can still choose to invest in a future that builds genuine welfare rather than shoring up collapsing infrastructure. In an urgent but still hopeful report, 2020: The Climate Turning Point, members of the highly-respected Potsdam Institute show there is still time to turn things around. Just. And the profound irony is that we can do this by investing in the very things that create welfare for society. “This moment of history,” they declare, “is not a burden; it is a tremendous opportunity.” They estimate that worldwide investment in a sustainable future-one with cleaner air and water, fulfilling livelihoods, more livable cities, and regenerating ecosystems-could make the world $19 trillion wealthier by 2050.

An important step to move toward this more hopeful trajectory would be to substitute a true measure of society’s health such as GPI for the currently ubiquitously GDP. As long as our political and financial leaders are evaluated by the distorted measure of GDP, our civilization may well disintegrate from climate breakdown even while they get credit for a cruel, topsy-turvy economic boom.