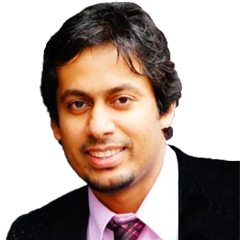 Dina visited Pakistan twice during her life. The first time, in 1948 to attend the Quaid’s funeral. The second was in 2004, when she brought her son and grandsons to visit the Quaid’s Mausoleum in Karachi. After the one hour she spent there, she wrote the following in the visitor’s book. “This has been very sad as well as wonderful for me. May his (Jinnah’s) dream for Pakistan come true”

Dina Wadia, the daughter of Quaid-e-Azam Muhammad Ali Jinnah, is sadly no more. She breathed her last at the age of 98 in New York this week. Dina was born on 15 August, 1919 — exactly 28 years before her valiant and astute father led the minority Muslim community of United India to the fulfilment of it’s dream for a separate homeland. The basis for this demand of independence? To uphold the economic and political rights of an Indian minority.

Dina visited Pakistan twice during her life. The first time in 1948 to attend the Quaid’s funeral. The second in 2004 when she brought her son and grandsons to visit the Quaid’s Mausoleum in Karachi. After the one hour she spent there, she wrote the following in the visitor’s book. “This has been very sad as well as wonderful for me. May his (Jinnah’s) dream for Pakistan come true.”

But had Jinnah’s dream for Pakistan not come true in 1947? Well, if his dream was merely to obtain a piece of real estate, sure it had. But if it was to carve a State that would serve to implement his values and his vision, and that in time would grow to become one of the earth’s great nations, then Dina’s yearning makes sense. For the Pakistan of today has drifted far away from it’s founding values. It is anything but Jinnah’s Pakistan. Lets take a quick look.

Firstly, equal citizenship. Jinnah was an outstanding lawyer and a great statesman who had a modern outlook on the world. While laying the foundations of Pakistan, he stated:

Jinnah’s dream of a Pakistan where every citizen enjoys equal treatment and rights was dealt a huge blow with the passage of the discriminatory Second Amendment in 1974, before being completely knocked down by President Zia’s anti-Ahmadi ordinance in 1984

Jinnah’s dream of a Pakistan where every citizen enjoys equal treatment and rights was dealt a huge blow with the passage of the discriminatory Second Amendment in 1974, before being completely knocked down by President Zia’s anti-Ahmadi ordinance in 1984. Sadly, today’s Pakistan has discrimination enshrined in its Constitution, which forcibly denies Pakistan’s four million Ahmadis the Muslim identity. Specific anti-Ahmadi laws make sure Ahmadis are treated like second-class citizens with strict penalties for ‘crimes’ such as reading the Quran, saying the Islamic Kalma, reciting the Adhan or anything which would identify them as Muslim..

Secondly, every Pakistani being eligible for office, part of the oath under which Jinnah took office read:

“No subject in Pakistan shall, on grounds only of religion, place of birth, descent, colour or any of them be ineligible for office.”

Jinnah was absolutely clear that the new state he was founding would accommodate people of all faiths and descents without any prejudice. To assert this point, he appointed a non-Muslim as his first law minister. The Muslims in his cabinet consisted of Sunni, Shia and Ahmadis alike. However, in today’s Pakistan, non-Muslims are ineligible for the State’s highest offices.  Consider this: if our first foreign Minister and one of our founding fathers, Sir Zafarullah Khan, was alive today, he wouldn’t even be able to vote, let alone stand for office. This was the man who drafted the Pakistan Resolution — unable to vote in today’s Pakistan because of his Ahmadi faith. Let that sink in.

Thirdly, the separation of Mosque and State: Jinnah dreamt of a Pakistan where the Mosque was separate from the State. He famously stated:

“You may belong to any religion, caste or creed that has nothing to do with the business of the State.”

Jinnah’s dream was smashed to pieces when the State took on the role of judging the faith (or lack thereof) of its citizens in 1974. In today’s Pakistan, religion is very much the business of the State. The right-wing majority — whom the State appeases — goes bonkers at the slightest suggestion otherwise. Case in point — the recent omission of the Khatm-e-Nabuwat clause and the ensuing madness across the country. Quite the spectacle.

Fourthly, freedom of worship. Jinnah dreamt of a Pakistan where every citizen would be free to worship in whatever way they desired.

Unfortunately, in today’s Pakistan, freedom of worship remains a dream for millions. Let alone the freedom to worship in their Mosques, the Ahmadis aren’t even allowed to identify their Mosques as such. They face a three-year prison sentence for doing so. Over a hundred Ahmadia mosques have either been sealed by the State, refused permits, burned down or forcibly taken over by extremist mobs.

Fifth, Jinnah never wanted Pakistan to be a theocracy. In an address in 1948, Jinnah promised:

“The great majority of us are Muslims. Consequently, we have a special and a very deep sense of unity. But make no mistake: Pakistan is not a theocracy or anything like it.”

Pakistan was not meant to be ruled by Sunni supremacists enforcing their worldview on the rest of Pakistan. Sadly, this is what has come to pass over time. Forget about the treatment of other non-Muslims, even Shiites and Ahmadis face intense prejudice and hate in society. In the case of the latter, the State strips them of all religious freedom as highlighted above. Pakistan might not be a full-blown theocracy, but it certainly is a supremacist State that leans towards a particular interpretation of religion at the expense of the religious liberties of other communities.

Sixth; Jinnah was staunchly anti-sectarian. Jinnah famously described his vision of a non-sectarian Pakistan with the following words.

Lamenting how rival Christian sects had persecuted one another in the past, Jinnah dreamt of a Pakistan where this would not happen, and coexistence would rule. Today’s Pakistan — where sectarianism and Takfir (anathematisation) is unfortunately rife — proves him wrong yet again. Militant outfits continue to persecute minority faith groups like the Shiites and the Ahmadis. The Hazara Shias have been particularly targeted over the last decade.  Hate speech from Mosques and madaris against rival sects is commonplace. Not only is sectarianism rampant in society, it has been given special credence by the country’s most scared document. Here’s a hint; the Second Amendment. Interestingly in this regard, Jinnah was also asked to pass Takfir against the Ahmadis. He responded with the following:

“What right have I to declare a person non-Muslim, when he claims to be a Muslim? Ahmadis are Muslims if they say they are Muslims and no one, not even the sovereign legislature, has the right to say otherwise.”

Seventh, women’s rights. To say that Jinnah would not be happy with the position of women in Pakistani society today would be a gross understatement. He famously stated:

“No nation can rise to the height of glory unless your women are side by side with you.”

Women’s empowerment is much needed in today’s Pakistan. Only about half of Pakistan’s female population is literate. In Balochistan, only a quarter of women are educated. Violence against women is rampant. Domestic violence, forced marriages, ‘honour killings’ and rapes are all under-reported. The attitude of the right-wing majority towards these issues is equally disappointing. Highlighting them and looking for solutions is often met with denial and anger.

In short, we have failed Jinnah and have drifted far from his dream. We have to make amends. We have to reclaim Jinnah’s vision. We owe this to our founder. And we owe this to Dina’s memory as well. There is no better way to pay tribute to her legacy that make her wish come true.

Interestingly, when Dina’s son — and Jinnah’s grandson — Nusli Wadia visited the Quaid’s Mausoleum in 2004, this is what he wrote in the visitors’ book:

“My dream to come here has been fulfilled. I will come back to see his (Jinnah) dream come true.”

I hope Nusli returns to Pakistan soon. How soon? That is up to us.

The writer is currently completing his Cardiology fellowship with Tufts University in Boston, US. He writes for various American newspapers and Pakistani publications and blogs at the Huffington Post. He tweets @KashifMD