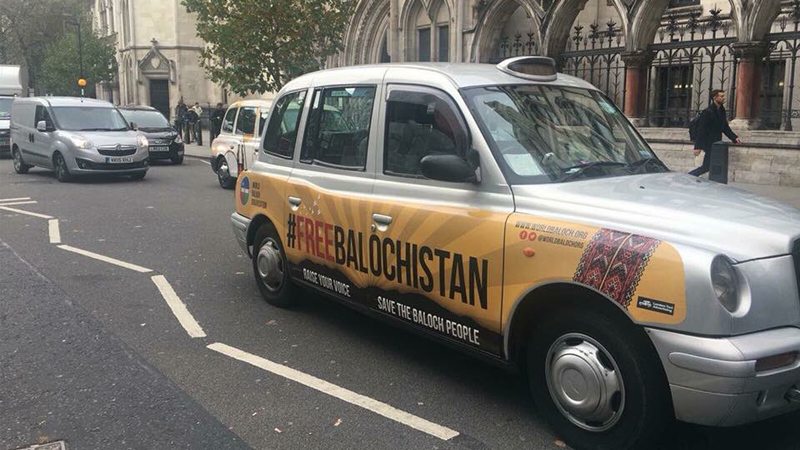 According to a statement released by the Foreign Office, “the high commissioner was informed that Pakistan, in line with the United Nations Charter, rejects actions and advertisements with malicious content that impinge on our sovereignty and territorial integrity.”

It said that the “issue was also being raised with the Foreign and Commonwealth Office by our High Commissioner in London.”

“Pakistan is aware of the intentions of such sinister and malicious campaigns, which should not be allowed on the soil of a friendly country,” the FO statement read.

In September this year, Pakistan had summoned Swiss ambassador over the public display of anti-Pakistan posters by a group in Switzerland.

According to a Foreign Office statement at that time, a strong protest had been lodged with the ambassador over Swiss authorities permitting the use of its territory for propaganda by elements linked with the Balochistan Liberation Army (BLA), a ‘terrorist organisation perpetrating terrorism and violence in Pakistan’.

It was also underlined that the ‘Free Baluchistan’ posters in Geneva had been sponsored by a group linked with the BLA, which had been proscribed by Pakistan as well as some other countries for its violent actions in the province. “Any notion of ‘Free Baluchistan’ is a flagrant attack on [the] sovereignty and territorial integrity of Pakistan,” Pakistan’s permanent representative to UN had written to the Swiss authorities.

Later, posters and advertisements calling for the liberation of Kashmir, Nagaland, Manipur and Tripura from Indian tyranny had also popped up in different parts of Geneva.

During the meeting matters of mutual interest and regional security were discussed, a statement issued here by Inter-Services Public Relations (ISPR) said.

Reacting to the malicious anti-Pakistan campaign, Defense Analyst Lt Gen (r) Ghulam Mustafa said, “Display of anti-Pakistan slogans on London cabs is a propaganda against Pakistan in order to keep us under pressure. Pakistan has rendered great sacrifices against terrorism. All the elements involved in the action are being funded by India. Pakistan will never tolerate any action which is against the sovereignty and integrity of Pakistan.” The UK government being the ally of Pakistan in war against terror must take serious notice of anti-Pakistan propaganda, he demanded. International relation expert Dr Pervaiz Iqbal Cheema said, “Our Foreign Office must strongly protest to the UK government against anti-Pakistan slogans displayed on London cabs. These cabs drivers must be Indians launched by Indian government as part of their anti-Pakistan campaign.”

He demanded that UK being a neutral country must investigate the matter “otherwise it will be clear that this campaign was launched in collusion with the UK government.”