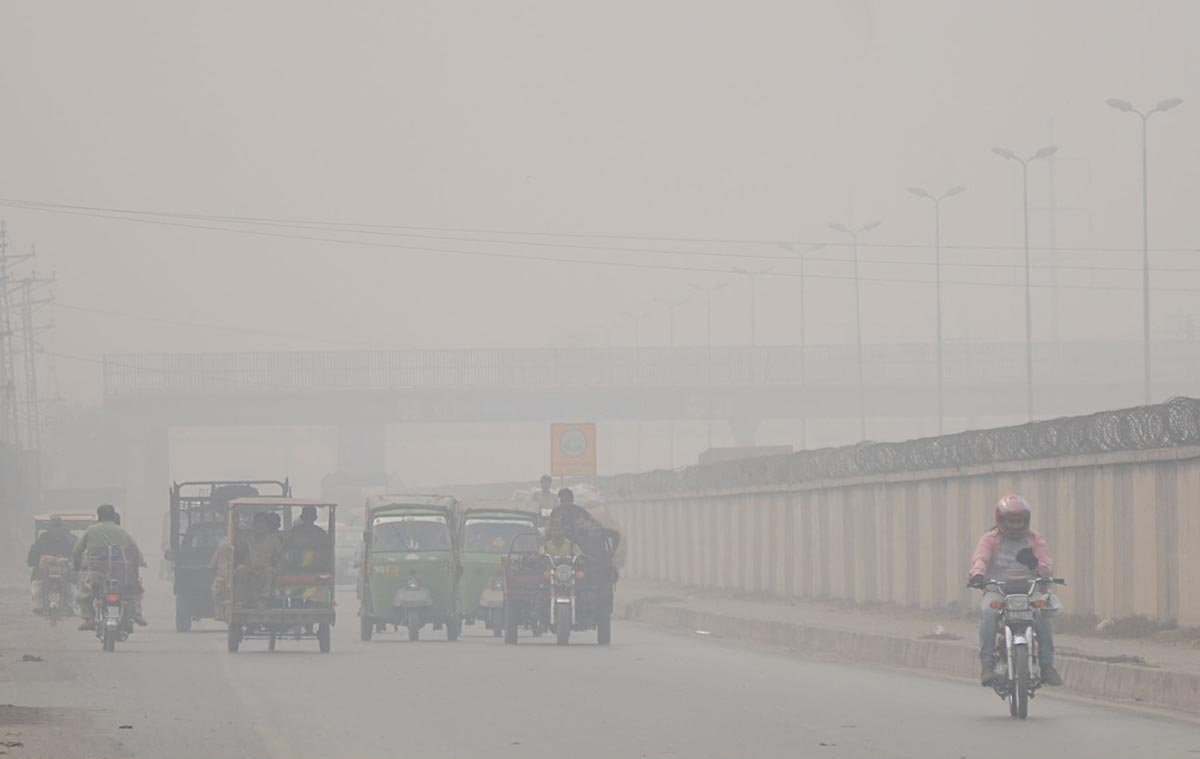 LAHORE: The citizens have been suffering from eye irritation as well as nose, throat and respiratory problems due to dense smog for the last couple of days in the provincial metropolis.

A number of people, including children, were admitted to different government and private hospitals of the city where everyone was found complaining about burning eyes and respiratory problems.

According to an estimated data of patients affected by smog, around 200 to 300 people are visiting public hospitals on a daily basis with complaints of irritation in eyes, sore throats and other respiratory problems. Most of the citizens found enquiring about the unusual situation they were facing. Many people contacted media offices and asked the reasons behind the dense smog in the city.

During a Daily Times survey in different areas of the city, a number of citizens complained that they were suffering with irritation in eyes ever since they woke up, while they were also having problem breathing. “We had never experienced such a devastating situation throughout our life,” said one of them, adding that it was similar to tear gas. People were of the view that the situation was due to unabated construction work being carried out in the city for the last many years.

Health experts of different hospitals recommended citizens to cover their noses and mouths and wear protective glasses and helmets to fight the effects of smog. They said that most of the patients complained about breathing problems, sore throat and itching in the eyes.

“Most of the patients who visited different government hospitals’ OPDs complained about breathing problems due to smog,” they said, and urged the citizens to keep their houses neat and clean, besides closing windows so that dust does not enter the house.

A number of doctors said that smog was very dangerous for those suffering from lung ailments like asthma. They said that extended duration of smog’s presence might also affect eyesight of the people. They said that ground-level ozone, sulfur dioxide, nitrogen dioxide and carbon monoxide were very harmful for senior citizens, children and people with heart and lung diseases.

A senior meteorologist said that most of the parts in Punjab, particularly Lahore, have not received any downpour, which made the situation worse. He said that cross-boundary emission of air pollutants, steel mills operating in the city, less downpour and unabated construction works were the reasons behind smog. He said the dense smog could disappear with rain, but there were no chances of rain in the next couple of days.

He said that the current situation was due to extensive air pollutants in the city. “Environmental Protection Agency (EPA), which was responsible for maintaining the record of pollution level in the city, could not monitor the pollution in Punjab, which made the situation worst,” he said, adding that the EPA had to inform the government about what was going to happen due to pollution, so that people could take pre-emptive measures to avoid health risks.

According to the Pakistan Meteorological Department, the smog blanket thickened due to cold high pressure in the upper atmosphere. The smog mostly consists of nitrogen oxide, carbon monoxide, sulfur dioxide and other aerosols.

When contacted EPA spokesman Naseemur Rahman said that recently six air pollution-monitoring systems were placed in the provincial capital, however, two others given by Germany were already working. When asked about coverage of the system in second most populous city of the country, he added that these new six and two old systems were enough for the coverage of Lahore. “Due to shortage of budget we were able to buy these six machines. However, we have planned to increase the number of machines for all cities of Punjab.”