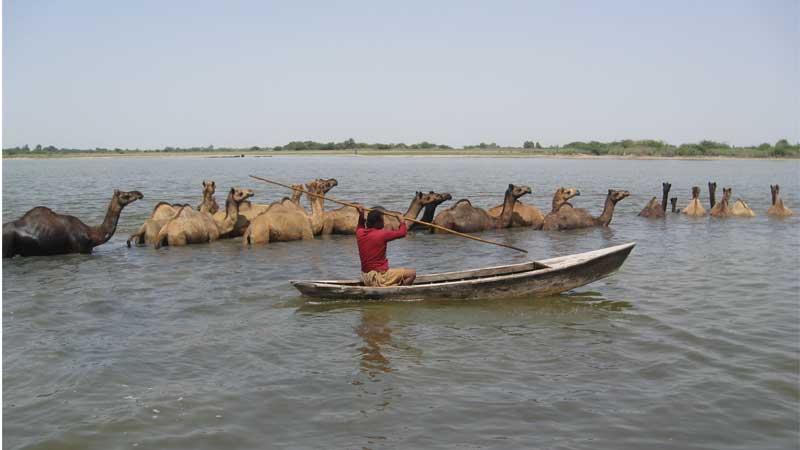 THATTA: Saleh Muhammad Jatt, in his early 40s, is busy tending a herd of around two dozen camels.

The medium-sized camels, with comparatively thinner necks and a well-developed hump, are lazily grazing outside Kharo Chhan, a village in the Indus Delta in southern Sindh’s Thatta district. This unique breed is known as Kharai. It is famous in Pakistan and India for its ability to swim in seawater.

Camels are known as the animals that thrive in the desert where there is not enough water or foliage. They have a natural a hump to store water and food for many days. However, this exceptional camel breed can swim into the sea, which makes Kharai camel unique from the other breeds.

Though, camels are known for beings the ships of the desert, Kharai camels are the real ships. They can sail into sea for around 10 nautical miles, according to the local Jatts of Thatta district. Climate change and modern technologies have changed ancestral professions of many ingenious communities. Saleh Muhammad Jatt is trying to save the last of these camels. This association with camels has been in his family for generations.

“My grandfather had more than 1,000 camels. However, I only have 22 now,” Jatt told Daily Times in a sad voice.

Jatt (Also Jat or Jath) is an ingenious community in lower Sindh, Makran and Katch (or Kachh) area of India.

Historically Jatts were nomad tribe of herders and used to travel all the time in search of pastureland for their animals. Among Jatts, Fakirani or Fakeerani tribe, has kept camels. Jatts and their camels are also important part of the Sindhi folklore.

In the famous love story of Sassi Punnuh from Sindhi folklore, Punnuh was a Jatt from Makran who falls in love with Sassi and came to Sindh to marry her. Famous Sindhi poet Shah Abdul Latif Bhittai has also sung about Jatts and their camels in his poetry.

Most of these camel herder Jatts used to travel from the mainland to the dozens of deltaic islands, which were made by the deposition of silt by the River Indus.

The deltaic region of River Indus, the tail end region of one of the longest rivers in Asia, is formed where the river empties into the Arabian Sea.

With presence of several indigenous communities, the Indus Delta has centuries old traditions and customs.

In the past, these camels were mostly living on deltaic islands, where they grazed on mangroves. Due to the strong flow of River Indus, the seawater near these islands is not very salty. During winters, when melting of glaciers up in the Himalayas is reduced and the river flow eases, the delta gets less water. Jatts then take their camels to the land where they live on twigs and fibers. “During winters, my family takes their flocks of camel back to the land. Our men ride the camels as they swim through the sea to reach the land,” Jatt said. For these local communities in the deltaic region, the camel serves as the only mode of transport. It is also used as an ambulance to carry the ailing patients to nearby hospitals. Camels are also used to carry goods and wood, for plowing and leveling land in the fertile Indus delta region, for working as mini-extraction mills to extract oil from seeds, for grinding grains and also pulling carts for transportation during the seasonal migration of many communities. Its milk is believed to have medicinal properties.

Despite having all these characteristics and importance for local communities, this unique breed of Kharai camel is now on the verge of extinction. Habitat loss and disease are the biggest reasons.

“Two tree species–the mangroves and arak or Peelu tree are the only food sources for these camels. Both are cut down on a massive level. That is why these camels are disappearing,” Jatt told Daily Times.

Indus Delta, covering an area of around 60,000 hectares, is a unique region due to presence of seventeen major creeks of the river, many smaller ones, extensive mudflats and fringing mangrove swamps which form a barrier against storm surges and also used as pastureland for these camels.

The Sindh Forest Department and international donors such as International Union for Conservation of Nature (IUCN) claim they plant mangroves at mass scale in River Indus Delta. However, locals say that all the creeks, deltaic islands, channels and empty river beds, where once there was thick mangrove forest, are now completely barren.

“Now, we rarely take our camels to the islands as there are no mangroves there. These islands also lack freshwater. So, now we keep our camels on the mainland,” Jatt said.

An office bearer of Pakistan Fisherfolk Form (PFF), an NGO working for fisher communities, Gulab Shah said that there was a high demand for Peelu roots in Karachi. “Due to the massive cutting of Peelu tree, these camels started grazing on other local trees that are not suitable for them. So, they often fall ill and die,” Shah said.