Never seen a person as wicked as Imran 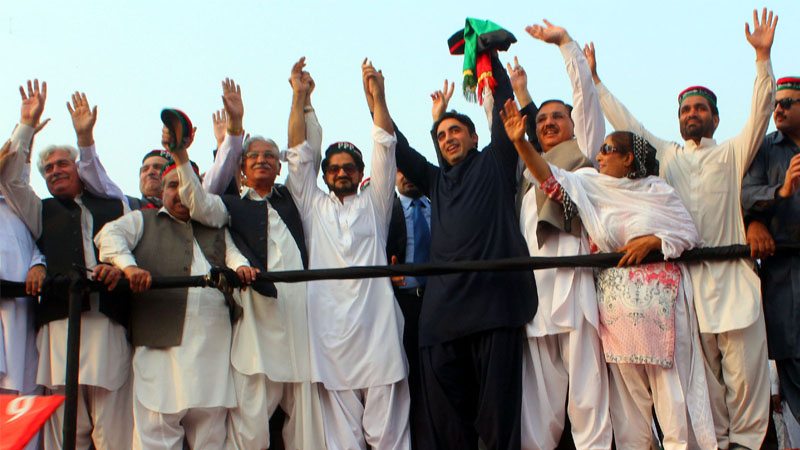 PESHAWAR: Pakistan People’s Party chief Bilawal Bhutto Zardari on Sunday said he had never seen a person “as clever and wicked as Imran Khan”, adding that Khan would resort to any tactics to shift from his residence in Bani Gala to the Prime Minister’s House.

Addressing a political convention in Peshawar ahead of the NA-4 by-polls, in which 15 candidates are contesting, the PPP chief questioned how can a man who has no control over what he says lead a profound nation such as Pakistan’s. “Imran Khan’s slogan of change is a farce,” he said. “There’s no bigger liar than Khan … he is an anarchist.”

Bilawal went on to accuse the PTI chief of using KP resources to propel his politics in Sindh and Punjab. “Imran is bent upon coming into power at all costs,” he said, and asked, “Where is the change that Imran Khan is oft-quoted for? … his billion-tree tsunami project did not yield anything … he himself instead got wealthier.”

Had there been any real progress, he continued, millions of people would have been employed and there would have been prosperity in the province. “The PTI-led KP government did not set up a single hospital in the past four years,” he said, and asked the federal government to take notice of mega scams of corruption in KP province.

Bilawal reminded of the time when TTP killed civilians and government officials in Peshawar and Imran Khan termed the Taliban as ‘forgotten brothers’. He said PPP has always stood against militants and spoke against them when other political parties did favours for their protection.

Lambasting the PML-N, he said that the development claims made by the PML-N are nothing but just a deception. “The fact is that only the assets of PML-N chief Nawaz Sharif, not the country, are progressing.”

“I want to ask you [Nawaz Sharif ] what is progress. Not even a single social class is happy with your policies. From trader to shopkeeper and from factory worker to mill owner, from grower to employees to pensioners, all are concerned,” he said.

Taking a jibe at former prime minister Nawaz Sharif, Bilawal said he did not step down until the top court removed him from power. “Now the incompetent government of disqualified Sharif is deceiving people, and is spending from the public exchequer to reestablish their image.”

While masses are being pushed towards poverty, the government is propagating that the economy is making progress, he said and asked his supporters to make their choice wisely and elect the right person in the forthcoming polls to lead them.