Return of the Russians

The recent visit by the Saudi King to Russia was, indeed, an historic one. Not least because this was the first such trip by a Saudi monarch to Moscow since their bilateral relationship began back in 1926. Thus the move by King Salman portends imminent changes to the geo-political landscape of the Middle East, where Russia is already emerging as a regional player.

This may help Saudi Arabia diversify its predominantly oil-based economy while providing Russia with crucial leverage over the US. The latter, of course, is itself a big player in terms of oil production, while also exerting considerable influence over other Gulf monarchies.

Nevertheless, as much as this was a landmark visit, it was also a surprising one. For the two sides have shared a troubled history, even though the erstwhile Soviet Union had been the first state to recognise the Kingdom of Hijaz and Najid (as Saudi Arabia was known until 1932).

Yet they soon found themselves on opposite sides on a whole host of regional and international issues, particularly during the Cold War years. Fast-forward to today and the same holds true in the Syrian conflict, with Riyadh supporting the rebels while Moscow backs the Assad regime. All of which lends even more significance to the royal trip to Russia. Meaning that if a long-time US ally can break bread, as it were, with one of its fiercest opponents — then something definitely is afoot. While certain nuances of this may be open to estimation — what we can be sure of is that Russia is rising over the Middle East.

By succeeding in turning the tide against anti-Assad forces and establishing final de-escalation zones in Syria — Russia has proved both its military and diplomatic clout. It is little surprise, then, that King Salman was said to have been keen to discuss a final agreement on Damascus with Putin

This balance of power shift may be partly down to the American disengagement from the region, in relative terms, that was overseen by the Obama administration, not to mention its nuclear agreement with Iran. The latter, of course, was concluded much to the dismay of both the Saudis and the Israelis. And although the Trump presidency has been busying itself with much sabre rattling against Tehran — it has been visibly devoid of any concrete Middle East policy. As a result, we see the US further alienated in the region, with traditional American allies now openly, albeit it tentatively, flirting with the Russian Bear.

If Washington is serious about reversing this trend, it will have to stop dealing with the Middle East as if it were a single, homogenous entity. This means recognising it for what it is: a region deeply divided along religious, ethnic, sectarian and political lines. The prevailing weakness of this American approach was very much on display over the summer when Qatar faced diplomatic isolation at the collective hands of the Gulf Cooperation Council (GCC). Doha, of course, happens to be home to the largest US overseas military base. Thus Washington’s apparent inaction — for fear of disaffecting one at the real cost of the other — made it look weak and unreliable at best. At worst, it appeared a superpower useful to none.

This is something that Russia has capitalised on. In other words, instead of risking such policy confusions, it has simply adopted a more flexible approach. This has enabled Moscow to engage with all regional stakeholders without fearing any loss to its credibility. For instance, Putin was able to balance reassuring Israel over the latter’s concerns of an Iranian presence on Syrian soil — given the Jewish state’s fears of a cross-border missile attack — and allowing Tehran into the country.

Speaking of which, by succeeding in turning the tide against anti-Assad forces and establishing final de-escalation zones in Syria, Russia has proved both its military and diplomatic clout. It is little surprise, then, that King Salman was said to have been keen to discuss a final agreement on Damascus with Putin. And it is this realisation that Moscow can no longer be ignored that may make all the difference when it comes to bringing the warring factions to the Syrian negotiating table, thereby restoring a fragile peace and a return to the status quo. 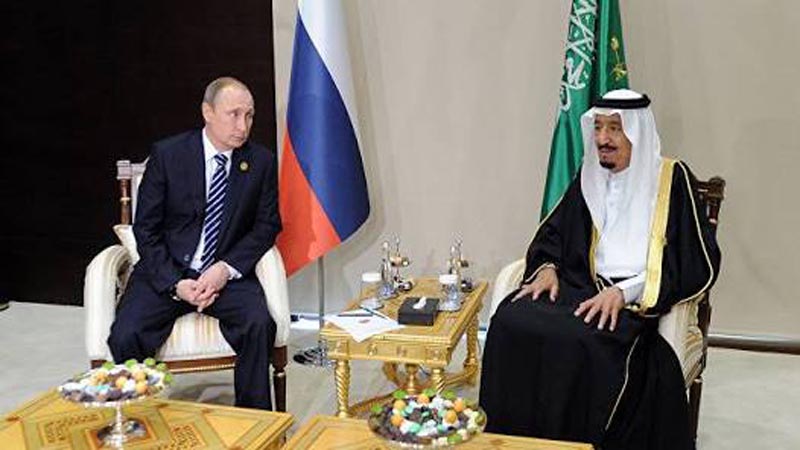 Saudi Arabia, for its part, is being prudent as it seeks to secure its interests vis-à-vis Iran and other potential regional rivals by diversifying its alliances and reaching out to Russia. Riyadh feels threatened by the Tehran missile programme as well as its regional influence, as underscored by the reported Iranian military and financial support to the Houthi rebels in Yemen and the Assad regime in Syria. Given that Moscow enjoys warm ties with Iran, it may well play the role of mediator between the two sides, thereby bringing an end to at least one of the region’s proxy wars.

For this to happen, Saudi Arabia would have to stop kowtowing to American dictates and instead strike a difficult regional balance between Washington and Moscow. In reciprocity, Russia will have to ensure that Iran avoids interfering within Riyadh’s immediate sphere of influence. This is challenging but not impossible. Meaning that common ground may be found, especially considering how the region’s states have long suffered at the hands of both long proxy wars and terrorism. In short, any sincere mediatory role played by a credible and reliable actor has more chance of success.

Thus the changing geo-political landscape of the Middle East, characterised by waning US hegemony and growing Russian influence, appears to be ushering in a new chapter not only in Saudi-Russian ties — but also in terms of the broader balance of power in the region as well as in the Persian Gulf.

Whereas the US had unleashed chaos in the Middle East under the false banners of human rights, democracy and terrorism, Moscow had presented itself as a stabilising force; an effective deterrent to a unilateralist, interventionist superpower. Nevertheless, it goes without saying that the real test for Russia is whether or not it will be able to maintain such a role in the long-term, keeping in mind the urgent need to balance some of the region’s historical arch rivals.

Be that as it may, one thing is certain. While we may not be going back to the USSR — Russia is most definitely here to stay.

The writer is a research affiliate at Strategic Vision Institute (SVI)