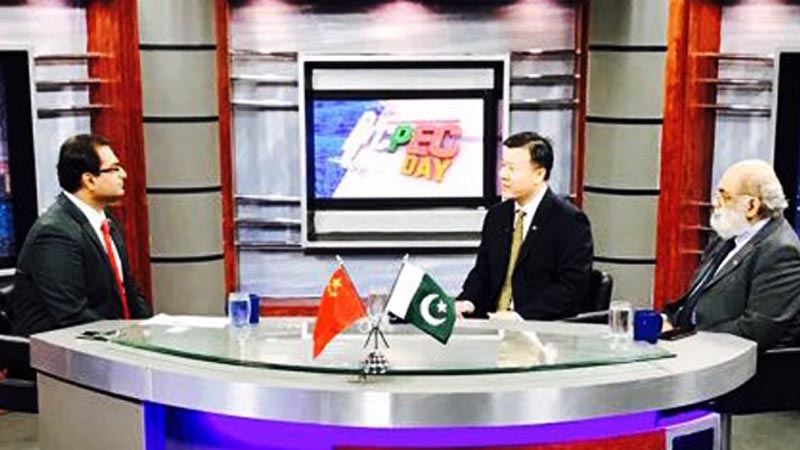 KARACHI: Media Times Private Limited celebrated the China Pakistan Economic Corridor (CPEC) Day on Saturday to discuss various dimensions of the initiative and its impact on the economy of Pakistan.

On the relationship between China and Pakistan and the future prospects, Wang Yu said that Pakistan and China had a long traditional and time-tested friendship. “Pakistan had extended a lot of help to China during a crucial time its history. Pakistan even tried to break the blockade against China when it was trying to get back its legitimate seat in the United Nations. This gesture will not be forgotten by the Chinese people,” he said.

To a question about expectations and ties on trade, finance and investment of Pakistan, Wang replied that CPEC project had remained vital not only for Pakistan, but also for China.

“CPEC has a scientific layout for Pakistan, covering four areas including, Gwadar Port, energy, infrastructure and industrial cooperation for development and prosperity of Pakistan,” he said.

Wang Yu said that 19 projects were under-construction. “Eleven of them are power plants, which will create at least 11,000 megawatts of electricity. This will be added to the national grid to help Pakistan overcome its energy crisis,” he said.

Giving his perspective on the future of Gwadar Port, Yu said that Gwadar Port had made a lot of progress within a short time. “We have also restored its capacity. Work also continues on establishment of Pakistan-China Primary School, where more than 300 students are registered. Fish processing factories and 14 small medical centers for healthcare of local people are also under construction,” he said.

Talking about the cultural exchange programmes, Wang said that he had found great enthusiasm in Pakistani people to learn Chinese language. “More than 20,000 students are getting education in China. Around 5,000 students are on scholarship. This will further strengthen the relationship between both the counties,” he said.

Explaining the benefits of the CPEC, Yu said that CPEC was the project of joint contribution and mutual cooperation. “China is aiming to share equal advantages with Pakistan that makes Pakistan a prosperous country,” he said.

Talking about the ‘One Belt, One Road’ initiative, he said that it had received an encouraging response from all around the world. “Around 60 countries have joined it so far. The aim of the project is to bring the whole world together as the world can live like a big family,” he said.

Deputy Managing Director Yu Hang said that the project would boost the economy of the country by creating job opportunities for the people of Pakistan and neighboring countries as well.

Yu Hang said that there was a dire need for raising awareness among countries about the market of Pakistan. “Even in China, very few people know about the market of Pakistan that has been performing well even after encountering many ups and downs. We have been working on various companies even the CPEC related companies either to get them registered into Pakistan Exchange System or issue bonds,” he said.

Talking about e-commerce, he said that e-commerce changed lives through digitalization and made the business more convenient.

Talking about the protection of stock exchange system from hackers, he said that security of information was very important and hence they had employed security officials to bridge all the gaps in the system.

He said that Pakistan needed to introduce some terms and conditions for an investor to be a part of ‘derivatives and future’. “There must be a risk management system so that ready market can boom and more and more market could be attracted for investment,” he said.