Sir Syed was much more than a mere individual; he was a social and political movement in his person — a movement which we now remember as the Aligarh Movement

Continuation of 2-part series. The first was published on October 17, 2017 and can be read here.

Their style, their manner, their trade, and their art Twenty years later, the very same Sir Syed sets up the Scientific Society and earns the epithets of kafir and zindiq from the representatives of ancient ruins. Was this intellectual revolution within Sir Syed a mere coincidence or were there any social reasons and dynamics behind it? Even a person of ordinary intelligence will say that the changes in Sir Syed’s thoughts were due to the issuance of Western-style administration, lifestyle and education in the country and had the influence and issuance of the West not been dominant, perhaps Sir Syed would still be engaged with the scenes of ancient ruins.

One of Sir Syed’s ardent disciples Maulana Altaf Hussain Hali has written in his biography of the former Hayat-e-Javaid about the attitude of Muslim notables in the 19th century that when Raja Ram Mohan Roy was demanding the English language and modern education, at the same time Muslim ulema by means of 8,000 signatures requested the Governor-General that we do not need the new infidel education; in fact the same old Farsi and Arabic teaching is enough. Like this the Muslims organised a front against the teaching of modern education, in which the religious scholars played an especially prominent role, about which Sir Syed expressed his embarrassment.

With regards to influence and pervasiveness, the most firm and influential person of that period was Sir Syed Ahmad Khan. He viewed the new intellectual changes at a level further than Ghalib. He understood that without adopting these changes and learning the new scientific education, the Indian Muslims would not only be left far behind in the race of progress, but they might not even be able to maintain their identity. Consequently, he began emphasising the foundation of Muslim cultural thought on scientific lines; and for this purpose he set up the Mohammedan Scientific Society. The base of this movement was rationalism — the use of reason.

There were lots of objections to Sir Syed that he was an Anglophile and that his attitude in response to Western thought was merely apologetic. These objections still persist. They were of two types: firstly, from the fundamentalists there were fatwas of being infidel and naturei. Secondly, the nationalists called him a lackey of the British that in his passion for adoption of new thoughts and visions, he had become a great ally and propagandist of the British government.

He began to appearing as an Anglophile to an extreme degree in order to pave the way for British strategy and decision-making. This objection was true to a great extent. Actually, Sir Syed was a political conservative and understood the security of India to be in continued British rule and instead of reconciling himself with the national aspirations of India, he saw Muslims as a separate nation. But from a social perspective, his attitude was progressive. He ran a proper campaign to organise views in favour of modern ideas and was against the worship of superstition. Viewed like this, even with him there was continuous change. In the beginning, he had written an essay Qaul-e-Mateen dar Abtaal Harkat-e-Zameen in 1848, in which he had tried to refute the theory of the movement of the earth; but gradually his thought adopted a scientific turn.

Sir Syed was a political conservative and understood the security of India to be in continuation of British rule. Instead of reconciling himself with the national aspirations of India, he saw Muslims as a separate nation

In terms of t religion, his basic inference was that there cannot be a contradiction in the word and work of God. He meant that nature cannot be against the word of God and if it appears to us as such, we are making a mistake somewhere in understanding the word of God. That is why we need to have commentary and exegeses of the word of God on new lines.

The second major flaw in Sir Syed’s educational scheme was that he did not pay any attention to the education and teaching of industry, handicrafts and technology; although a nation cannot progress economically at all without technical education. There was no space for industry and handicrafts in its thought and attitude. So until the 1930s and 1940s at Aligarh there was no arrangement for education and teaching in technology, engineering and medicine. But Sir Syed’s role in our cultural and intellectual history has been undoubtedly unique, and which cannot be denied. 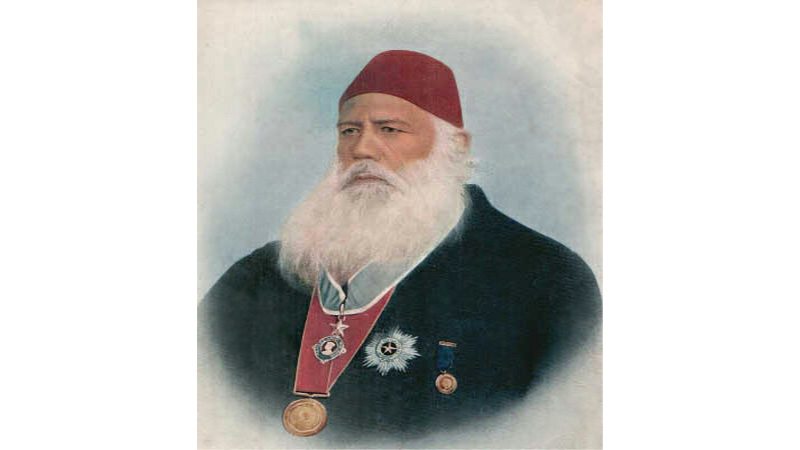 As for the fact that he was a British loyalist and a supporter of British strategy, that objection is not really significant any longer; because he has turned our intellectual current towards scientific thought and Sir Syed has a huge role in the enlightenment and mature outlook present here. He has liberated us from a worship of superstition, religious preconception and an obsolete way of life. It was due to his strong personality and intellectual steadfastness that strong groups of educated people who were enlightened and had modern thoughts gathered around him; even today we refer to them as the Sir Syed School.

The position and importance of Sir Syed was much more than an individual; he was himself a movement in his person, a movement which we now remember as the Aligarh Movement. He paved the way for the likes of Hali, Maulvi Muhammad Hussain Azad, Deputy Nazeer Ahmad, Shibli Nomani, Maulana Abul Kalam Azad and most importantly, Allama Iqbal.

It has been observed above that Sir Syed was a person who was politically conservative and socially progressive. But the movement he started also had both political and social effects which led to reactions both against and in favour of the former. In the literary domain as well, there was a notable reaction against the Sir Syed movement, for example from the Lucknow School which supported old values; it included Pandit Ratan Nath Sarshar and Munshi Sajjad Hussain. The whole Oudh Punch group was against Sir Syed Ahmad Khan and his comrades. Some of Sir Syed’s detractors composed poems to call him a new prophet of naturism:

He (Sir Syed) is the messenger of ‘natural religion’

This natural religion was indeed “revealed” to him

He alone knows the secrets of the Book, because

All the esoteric knowledge has been vouchsafed to him

The evidence of his prophethood is visible to all

It is visible in the pages of his Tahzib al-Akhlaq

Other notable opponents of Sir Syed’s project were the distinguished Pan-Islamist thinker and activist Jamaluddin Afghani and the eminent humourous Urdu poet Akbar Allahabadi. According to Allahabadi,

What our respected Syed says is good

Akbar agrees that it is sound and fair

But most of those who head this modern school

Neither believe in God, nor yet in prayer

They say they do, but it is plain to see

What they believe in is the powers that be

One of Sir Syed’s disciples, Deputy Nazeer Ahmad bitterly satirised his mentor in the novel Ibn-ul-Waqt (The Opportunist).

Another disciple Shibli Nomani abandoned his mentor and founded another institution, the Dar-ul-Uloom Nadwa. A lot was written against Hali’s Muqqadima Sher-o-Shairi that ‘it is trampled like the field of Panipat’, etc. Then on the other hand was the entrenchment of Deoband. Such Deobandis had a quality that politically they were nationalist, but extremely conservative socially. At that time Aligarh was politically the citadel of conservatism and a progressive environment socially. The highest point for most people was to obtain jobs in government and civil service. There were also two distinct groups among writers and poets: one consisted of supporters of enlightened and progressive thought, while the other group had writers and poets who favoured obscurantist and past-worshipping ideas.

As the noted Urdu worker poet Ehsan Danish observed in his tribute to Sir Syed in his poem ‘To Sir Syed’s Spirit’ (Sir Syed ki Ruh Se), which will endure:

The heavenly revolution has done a lot until now

But the permanent colour remains in your construction until now

Had it not been for your awakening, bewaring the gardener’s mood

The traces of the garden would long have faded until now!

A thousand storms, a million tornados passed but!

Your chandeliers are aglow in the darkness until now

What was lit by the sparks within your chest

That secretly burning fire could not grow cold until now

Your foresight has granted lamps to the future

Is it any wonder that those who disrupted your intentions

Without you where would they have been in history until now

The pulse of civilisation has remained in your hands such that

Let the age wander away from its center, if it wants

Your fellow-travelers (are induced to) follow the caravan until now

Though an agreeable wind is blowing with great force

Your knowledge of the destination has come to such a pass

The participants of the caravan are like Khizar until now

The promoters of the new order are bent on subversion otherwise

Foreheads are awake within your particles until now

The prejudice of leadership is the denier of justice otherwise!

Your ampleness stands as a supplicant until now

Until when will the history of Mankind be mutilated

Note: All the translations from the Urdu are by the author unless otherwise stated.

The writer is a Pakistani social scientist, book critic and an award-winning translator and dramatic reader based in Lahore. He is currently the president of the Progressive Writers Association in Lahore. His most recent publication is an introduction to the reissued edition (HarperCollins India, 2016) of Abdullah Hussein’s classic Partition novel ‘The Weary Generations.’ He can be reached at: razanaeem@hotmail.com