Jordan is making the desert bloom with its farm focus 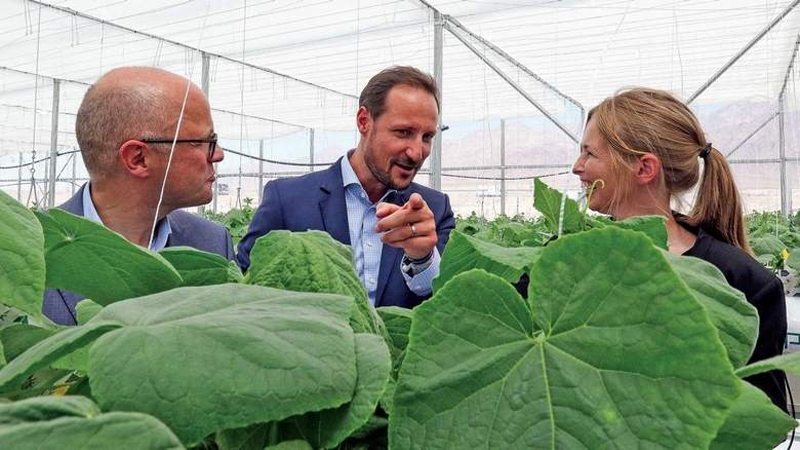 Hope in Jordan is taking the form of a cucumber in the desert. It is not a mirage. Some say it is the future. In the arid southern desert of Wadi Araba, where scorching temperatures and dust devils leave scant signs of life, a team of environmental engineers is working on a solution for countries on the front lines of climate change, facing drought and rising temperatures.

The engineers say they are designing a sustainable farm that uses solar power to desalinate seawater to grow crops in regions that have been arid for centuries, and then use the irrigation runoff to afforest barren lands and fend off desertification.

Similar ventures have had success in neighbouring Israel, but it remains to be seen whether a fully sustainable farm can breathe life into the Jordanian desert and offer a model to a country that cannot spare a drop of its dwindling water resources. Jordan has struggled for decades with water resources over-stressed by dramatic sudden population growth. Driven by waves of refugees, the population nearly doubled, from 5 million in 2004 to 9.5 million in 2015. Jordan is currently ranked by the United Nations as the second-water-poorest country on the planet, behind only Bahrain, while increasing desertification due to over-grazing and improper irrigation techniques has reduced its grazable lands by 70 per cent in the past three decades. With the creeping effects of climate change, bringing ever-hotter summers and shorter rainy seasons in the winter, the future for Jordan’s environment is bleak. In the drought-prone country, the enhanced evaporation of near-surface water due to decreased rainfall and hotter temperatures in recent years has rapidly increased the salinity of the soil, literally salting the earth. Jordan now has less than 1 per cent forest cover and is more than 90 per cent desert.

And the changes to come may prove to be even more dramatic.

According to a study published in August by leading researchers in the peer-review journal Science Advances, as soon as 2071 the average temperatures in Jordan could rise by as much as 4.5 Celsius or 8 degrees F. Droughts, the study suggests, could become twice as frequent and twice as long, and rainfall – a major source for Jordan’s dams and water resources – will likely decrease by 30 per cent.

“Our results suggest that by the end of the century there will be a substantial increase in concurrent higher temperatures and lower rainfall,” Steven Gorelick, head of Stanford University’s Jordan Water Project and co-author of the Science Advances paper, says by email. One potential solution lies in a patch of Jordanian desert that has not yielded crops for hundreds of years. Originally conceived by environmentalists on the sidelines of the failed 2009 climate change conference in Copenhagen, the Sahara Forest Project was devised as a way to roll back the rapid desertification across Africa and the Middle East while addressing food and energy shortages.

“The food-energy-water nexus is very connected to climate change, and in order to address them, we believe you need to take an integrated approach to address all three,” says Joakim Hauge, Sahara Forest Project chief executive officer.

“This all came from a simple perception: we want to use what we have enough of.” Supported by USAID, the European Union, and the Norwegian government, the commercial project combines solar power, seawater desalination, natural wind power, and computer-monitored controls to get the most out of each drop of water and to revitalise the barren soil.

Neighbouring Israel has long worked to farm the arid lands of its Arava (Wadi Araba) and Negev deserts. Although in possession of more fresh water and energy resources than Jordan, it was facing a severe drought in the early and mid-2000s. After heavy investment in desalination, Israel’s production grew in a few short years to more than 130 billion gallons of potable water per year. Jordan and Israel have pledged to jointly build a desalination plant on the shores of the Red Sea as part of a controversial $900-million project to lay a pipeline from the Red Sea to the contracting Dead Sea, which is below the sea level.

But there has been little coordination between the countries’ researchers on the twin effects of climate change that both are fighting: drought and desertification. The Red Sea-Dead Sea project is years away, while timelines for the project remain hazy.