“Shirk mat karo, (don’t indulge in polytheism), ask Allah directly for what you want,” is how most people react when I tell them of my plans of visiting the dargah of a Sufi saint, one whose name or poetry I may have heard in a qawwali on YouTube, for instance. It is this attraction that prompted me to visit Pakpattan in Punjab, the final resting place of the 13th century Sufi scholar and poet Baba Fareed, also known as Fariduddin Ganjshakar. In one of his literary works he wrote “Utt Fareeda Sutteyan, dunya wekhan jaa / je koi mil jaaye baksheya, te tubhi baksha jaaye”, (wake up Fareed, go see the world, if you find somebody forgive them, so that you too can be forgiven one day). After hearing such magnetic, tender words how could one resist meeting this spiritual friend from 800 years ago? When the world is coming apart at the seams thanks to everyone’s inner poison, Sufi saints and their teachings can prove to work like an antidote to hatred if we allow them to penetrate into our souls.

For now, however, these Sufi dervishes lie heavily barricaded, protected by metal detectors and security personnel that rummage through our belongings looking for suspicious objects. Dargahs, like churches and temples in the country, are vulnerable places, always on the target of the ‘torch-bearers’ of Jihadi Islam. The hard lined Muslim of today’s Pakistan mistakes darbars for grave worship. To him or her they represent remnants of our Hindu past, something they’ve been trying hard to erase, it is diluted Islam, they lament. Tabbaruk is similar to prasad for them and qawwalis are akin to bhaajans. They conveniently overlook the syncretism found in dargahs, the message of tolerance and the mere absence of class division in the courtyard of the saint that sleeps for now.

There are no VIP seating arrangements in the Pakpattan darbar; everyone sits down on the marbled floor after paying their obeisance and scattering their flowers while whispering their hard pressed wishes, hoping to use Baba Fareed’s waseela to get their prayers answered

There are no VIP seating arrangements in the Pakpattan darbar, everyone sits down on the marbled floor after paying their obeisance, scattering their flowers, and perhaps whispering their hard pressed wishes into the ears of Baba Fareed, hoping to use his waseela to speed up the bureaucratic process with the Creator up above. I am unmarried so my peers and naysayers mistake my affinity for these spiritual haunts as marriage related trips but that is far from the truth. Dargahs are best experienced without an agenda, when the devotee goes there to empty herself of all noises and to experience ‘nothingness’, that is when she comes closest to embodying the spirit of the dervish. All else is settling for far less than what these places may have to offer.

Baba Fareed was the spiritual master of Hazrat Nizamuddin Awlia of Delhi. Both belonged to the Chishtiya silsila in Sufism that was responsible for converting hundreds of thousands to Islam not by an iron fist but through compassion. They flung open the doors of their kitchen to all sans prejudice. From Baba Fareed’s spiritual constituency no one ever returned empty handed, if there was no food to offer, there was always water and warm heartedness to take back as favour. Baba Fareed on his part fasted every day of his life, such was his love for Allah and his creation. It was the charitable nature that charmed the crowd, the helpless felt at ease turning to a wise man that often rejected financial assistance from the royalty, and relied solely on Allah for help. 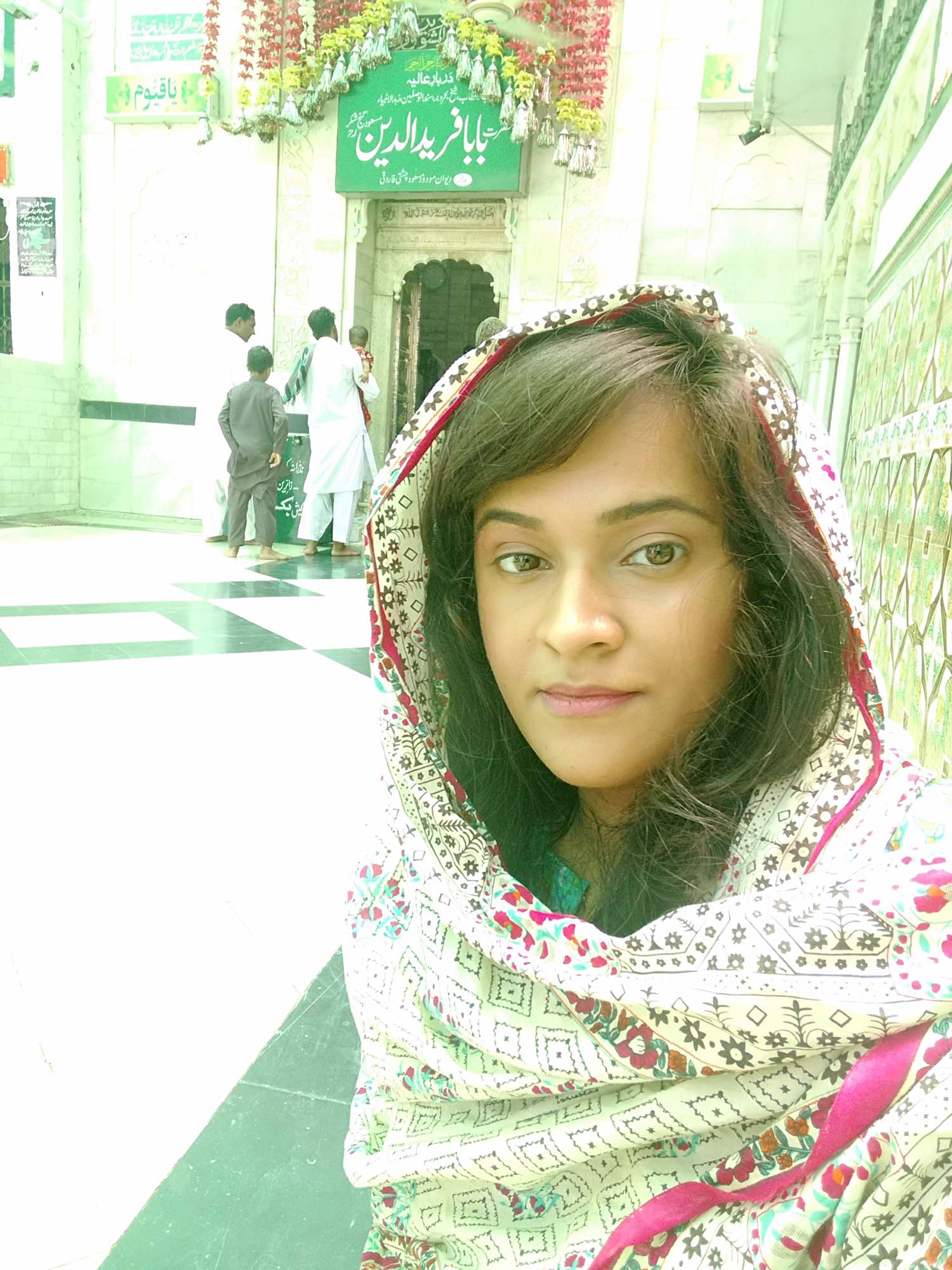 As I meditated in one corner, it became impossible to overlook the selfie session of the pilgrims. I suppose no trip is complete nowadays until it has been validated on social media. In a matter of moments my concentration was also corrupted by this need to capture myself on my phone camera, so I also took some selfies hesitantly. The 21st century spiritualism comes with its own demands; selfie or no selfie I was just glad to be nearer to a spiritual friend Fareed whose name is laced with sweetness.

Legend has it that to encourage her young son to read namaz, Baba Fareed’s mother would place a handful of sugar underneath his prayer mat as an incentive. One day she forgot to do the same and apologised to her son who in turn said, “But the shakar (sugar) was there.” This miracle marked the beginning of a path, which took Baba Fareed across South Asia in pursuit of Islamic studies and excellence. 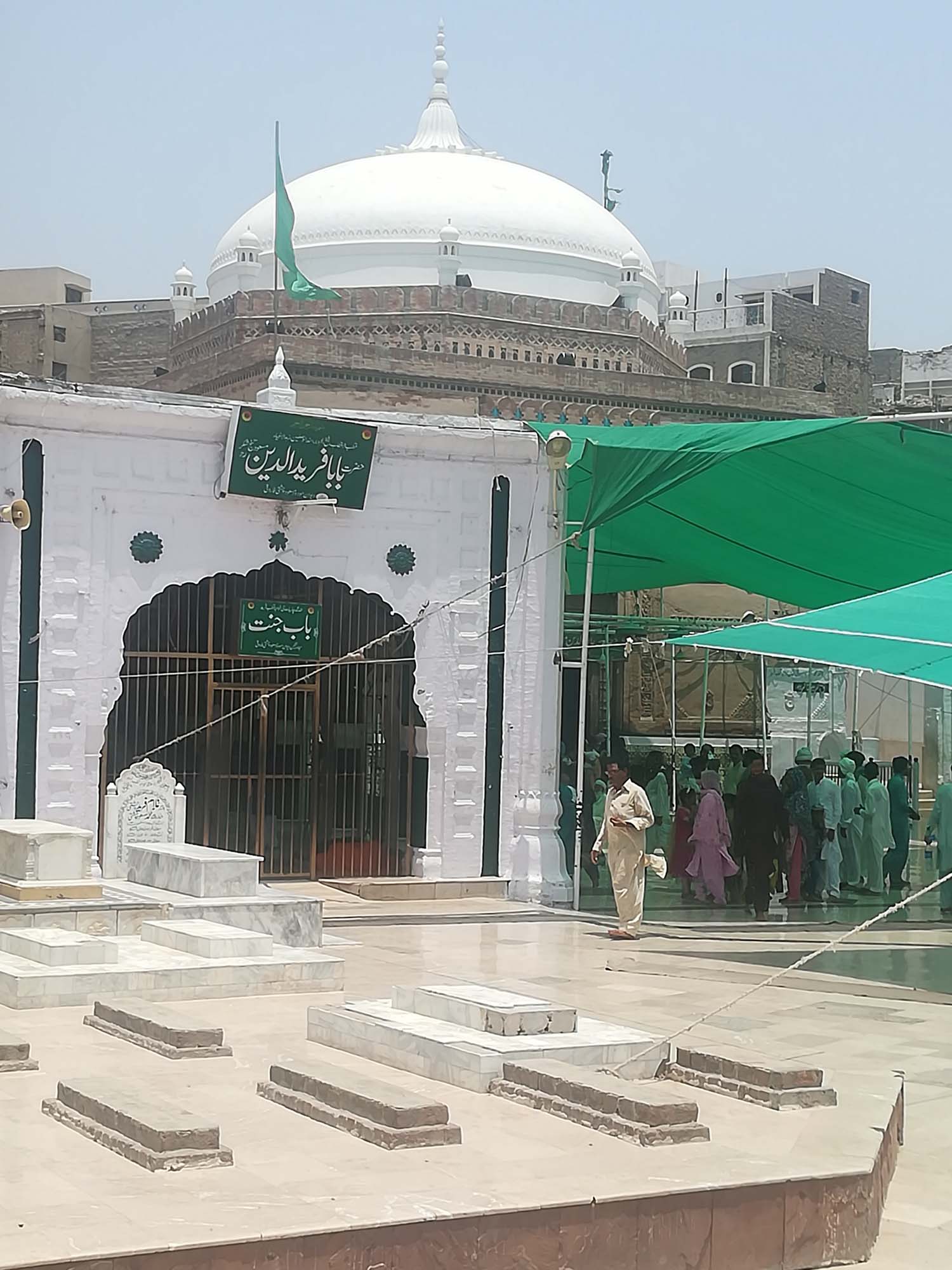 As I made my way out of the shrine, I felt compelled to purchase some shakar (sugar) packets, being sold in abundance along with incense sticks, chaadaar, and petals at makeshift shops that are a common sight outside shrines. There may be right or wrong answers in the realm of religion but the crux of spirituality is all about enjoying one’s own unique experience tackling the questions of the soul. Sufi saints are much like lighthouses in the middle of the night, helping direct our energy towards purifying ourselves. Now whenever I add some sugar to my morning tea, I remind myself to be kinder, to live life like a whirling dervish balancing deen (faith) and dunya (world) well and to monitor my steps everytime capitalism wishes to seduce me.

The writer tweets at @MariaSartaj and can be reached at maria.sartaj@gmail.com