A story of unbinding love

The Ministry of Utmost Happiness is a binding tale of love, unremitting passion, boundaries, uncertainties and misfits. Arundhati Roy takes us to the utmost negations and denials of our language, life and society. She joins the dismantled pieces of our dismissals like the jigsaw of a puzzle. The novel is a roller coaster of a ride, which traverses along the dangerous and precarious routes of the dark alleys of our modern and civilised world. This narrative is a sighing of all the neglected, unattended, untouchables and discordant fragments of society. A rich text, which takes us from the local life of streets and lanes of Delhi and Shahjahanabad to the trails and valleys of Kashmir, from the horror of streets and lanes of India to the torture cells of Kashmir. It is a tale of horror and confusion, a convoluted drama of events where one keeps looking for the answers in an attempt to join the dismantled fragments of a mystery. 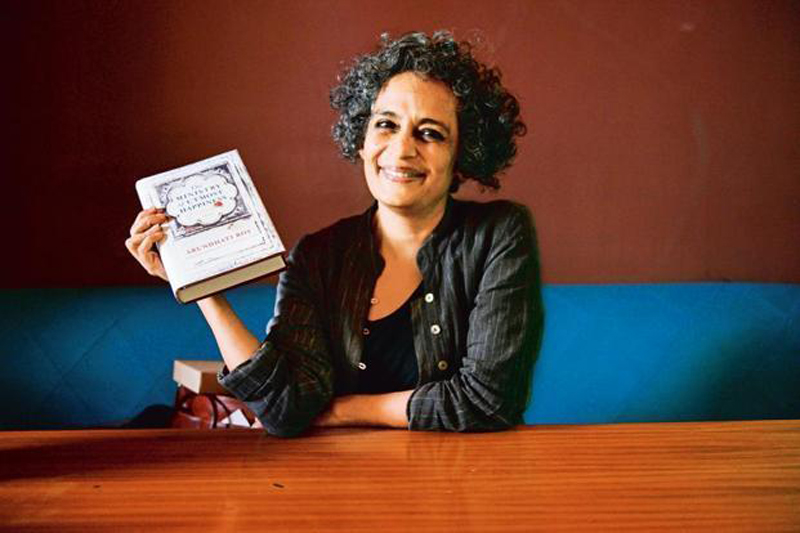 Arundhati Roy, like a bold and uncompromising writer that she is, presents an avid critique on the political and social structure of a free and democratic state. It is an intense account of the uncertainty of life in Kashmir where a love affair starts at a bomb blast and ends at a bullet in one’s own house’s roof, a place where one is always under surveillance and where reticence at the funeral of your wife and daughter is evidence enough to make you suspicious in the eyes of Indian army. “He was picked up from his home after the funeral. Over-quietness at the funeral of your wife and child would not have passed unnoticed in those days.”

The narrative brings the painful realisation of the vulnerable nature of the fight for azadi. With all their passion and death desire, Kashmiris are a divided force in many ways: with various freedom fighters come militants with their own rules to wage an eternal fight against Indian army. “We’re a valley of idiots and schizophrenics, and we are fighting for the freedom to be idiotic and we have to do away with our complexities, our differences, our absurdities, our nuances. We have to make ourselves as single-minded, as monolithic, as stupid as the army we face.”

She captures the sense of loss at a place where dead are more alive and the alive are dead already, a political regime which has turned the clerks, labourers and local workers into criminals who act violence and get busy with their daily jobs. A story of unbinding love, mystery and thrill, uncertainty and perplexity, ambivalence and confusion that brings to life a whole lot of tales and stories from a host of origins. It captures the misery of not only Muslims in Gujrat and Kashmir but also of Dalits, Syrian Christians and untouchable young Indian soldiers who lose their life at the hands of young militants whose own maximum age is of two years before they are dead in the torture cells. She seizures the horror of that society which denies a suitable burial to a Dalit –an untouchable Indian soldier, where his statue even if erected is dismantled before it becomes a sign of appreciation and honour. “They felt it would give out the wrong message, give people ideas.”

Things seem to happen in reverse like the backward reading of spellings by Estha and Rahel. It is a tale which subverts the conventions of society, where it is the misfits, the untouchables, the unacceptable ones who are harbingers of life: it is a graveyard which is the emblem of life, and it is the guest house established by a hermaphrodite, which is the symbol of creativity and life. The graves are accepting what humans refuse to accept. It is a tale with dangerous apprehensions for future –for the society, which is at war with itself in every possible way, where the violence is now crossing boundaries, where both the torturers and the victims suffer. The suicide of Major Amrik Singh reminds one of the horrors of one’s own torture on others, the way Kashmiris have found to take revenge upon their torturers. With more violence India is committing a national suicide every day. It is destructing itself with the horrors of its own doing. “One day Kashmir will make India self-destruct in the same way. You may have blinded all of us, every one of us, with your pellet guns by
then. But you will still have eyes to see what you have done to us.”

Roy presents an avid critique of political and social structures of a seemingly free and democratic state. Hers is an account of uncertainty of life in Kashmir, a place where one is always under surveillance

Amidst all this political climate of chaos and aberrance, Roy weaves a beautiful tale of an innocent love, a love which is undemanding yet intense, a story of college friends who fall in love with the same girl and love her in their own way, a ‘hijrra’ with an indo-Pak inside who tries to find his place in the strict boundaries of gender. The Ministry of Utmost Happiness is an unforgettable tale, which touches you on many levels of mind and heart and invites you to unweave its rich texture thread by thread and share its loss, love, horror and hope.

The writer is a lecturer at the Pakistan Institute of Fashion & Design. She can be reached at fareehanadeem2014@gmail.com