Please tell us about your early life and how you began your career.

I was born on March 2, 1970 in the village of Muhammad Arab Solangi, Tehsil Kot Diji Khairpur Mirs, Sindh, Pakistan. My father Muhib Ali was a teacher in a government school. During my childhood years, I wanted to seek education but my wishes were destroyed on the sack of local tradition that females do not need to come out from the house and seek education. I got married at the age of 12. My husband abandoned me when I was 20, accusing me of being unattractive and illiterate. After my divorce at the age of 20, I had nothing but had to take care of my two young children. After moving back home with my parents, I felt rejected and humiliated and almost suicidal, but I kept going. I expressed a desire to learn, but largely due to cultural norms, my brothers discouraged me. Nevertheless, I began studying on my own, and eventually, one of my brothers came forward and allowed an older cousin to help me. Within four years, I passed the matriculation exam. Although people ridiculed and humiliated me when I started studying but I didn’t lose heart. To support my children, and myself I did embroidery until late in the evening. So then I said to myself and my family that I want to be on my own and I must get an education. In 1989, I became a teacher at a girls’ primary school in my village. But my thirst for education was much bigger than that. At the age of 31, without any formal schooling, I successfully attained a Bachelors degree. So from there, the working of Marvi Rural Development Organisation started as I with the help of a few others started to take baby steps for the welfare of rural women and making them aware about their fundamental rights. Many objected, even my brothers but my ambition was strong and I wanted to do something for humanity. 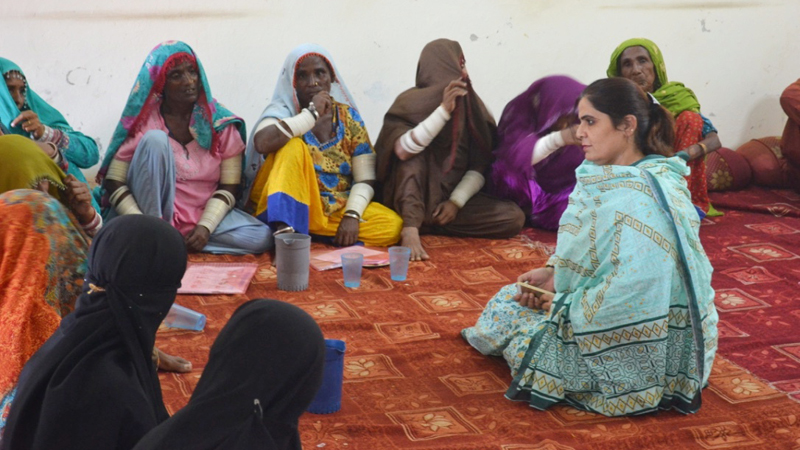 You have been an advocate of women’s rights for many years. What has been your motivation?

The motivation behind my work for women is solely because of my bitter past. I feel one can only understand the bitterness and harshness of life if he or she has experienced something like this themselves. I belong to the same culture where women have been victimised since ages based on ancient traditions of Karo Kari, early and forced marriages, wata sata, gender-based violence, sexual exploitation at the hands of feudals, and modern forms of slavery. There are other miseries as well which are often left unreported and unnoticed. I think that is the intrinsic driving force behind my work.

Tell us about the Marvi Rural Development Organisation?

The Marvi Rural Development Organisation was established in 1994. The main focus was to create social and economic empowerment of rural women and communities at grassroots level and also to enhance the role and socio-economic status of people especially women of backward rural communities by providing them assistance and sustainable prospects. To do this, the MRDO organises workshops, seminars and meetings. Our public meetings attract hundreds of women. The MRDO reached 287,759 vulnerable women in 2013 through its technically researched and designed projects based on the most immediate and relevant needs of underserved communities.

What more needs to be done to ensure safety for women?

In my opinion, if all of us started realising and contributing in person, regardless of what minor we can do for women and girls, this will lead to major and distinct changes around us. Additionally, women need to be more aware of their basic human and legal rights. Ignorance of their own rights further keeps them at a disadvantage and hence they tend to be more vulnerable in male-dominated domains. I personally believe that complete, absolute and comprehensive freedom should be given to both women and men equally. Hypocrisy needs to stop. We have to educate our children, your neighbours, our classmates and our colleagues regarding this. We have to enlighten them. Let the common man know that he no longer has any control whatsoever over a woman. That a woman is free to do what she wants, say what she wants, and dress the way she wants, talk to whomever she wants. Only then a change can come. It is not as if nothing is being done in Pakistan with regard to women empowerment but whatever is being done, is clearly not enough. Most women in the country, especially in the rural areas, are being deprived of basic human rights. It is not only the duty of the government or NGOs to safeguard women’s rights; it is the duty of every citizen to ensure that their rights are protected.

What are the problems being faced by the rural women of Pakistan?

There is victimisation against rural women. They are deprived of their rights. Education is a dynamic force, which can help provide these rights to women. The feudal system is responsible for this deprivation and these atrocities against women. The media has played a positive role for exposing the act of honour killing, torture and harassment against women. I believe that until and unless development takes place (eg roads, electricity, water supply and schools), the quality of life for women will remain unchanged. In rural Pakistan, women are unable to derive any benefit from most developments in their communities because of customs that discriminate against them. I am enabling young girls to go to school and become educated and empowered by addressing the economic barriers – faced most starkly by their mothers – to their education. However, things are changing now. Thanks to awareness campaigns launched by different non-profit organisations, civil society stakeholders the media and judiciary.

‘My bitter experiences  motivated me to work for women’s empowerment. I feel one can only understand the bitterness and harshness of life if he or she has experienced something like that themselves’

After receiving the award for courage in the US and representing Pakistan, in what ways do you think you have contributed to a change in the Pakistani society?

It was an immense pleasure and an honourable feeling for me to have represented my country’s flag in the US. I take this recognition as the recognition of every deprived woman of my beloved country for playing her own part for the betterment of society. As far as change is concerned, it is a continuous and a gradual process, which might take ages.

How do you rate civil society organisations, particularly NGOs, in promoting women’s rights?

Civil society organisations are playing the sheet anchor role in their pursuit of eliminating the deprivation of women’s rights. They have practically delivered by generating viable results but still their approach is pretty limited due to a lack of budgets as well as regulatory and limited authority. For this, I personally urge the state to strengthen the civil society culture and extend the level of trust in them with the overall monitoring to end the violation of women’s rights.

What is your message to the women of Pakistan?

My greatest wish is for women to become independent entrepreneurs and to earn a living without fear, rural areas included. Women make up 52 percent of the nation’s population and it is only fair that their employment ratio is increased. There should also be greater female representation in parliament and they should be accorded the right to property inheritance. Women are not meant to be possessed; they are the pride of our society. From raising their children through to educating our youth, they carry the largest burden of helping us in comprehending how important life is and why it should be preserved for the greater good of mankind.

How do you define yourself?

A woman who has struggled.

The writer is a social and political activist based in Lahore and can be reached at salmanali088@gmail.com