-The more worrisome point is that when one client faction becomes a threat to it’s former patrons, a new group is created to counter the dissident group rather than rectifying its policies. When a state counters or tries to counter the first faction with the assistance of a second group, then that second one occupies the space vacated by first one. This cycle of religious extremism and counter extremism has been continuing since the 1980s.

After 2001, Pakistan began the process of politicising Sufi Islam by empowering Barelvis — followers of Sufi Islam, to counter Wahabbi extremism. However Barelvis too starting engaging in militancy.

This was seen during the Musharraf regime when it began institutionalising Sufi Islam in Pakistan by establishing the ‘National Council for Promotion of Sufism’.

Tehreek Labaik-Ya-Rasool-Allah party members secured the third position with 7,130 votes in the NA-120 by-election and left the Pakistan People’s Party, far behind. During their election campaign they openly used Mumtaz Qadri posters to attract voters

The notion behind this step was the perception that Sufism is based on tolerance and harmony. Even the United States took great interest in and even sponsored the Sunni Ittehad Council (SIC) — a Barelvi religious party which was primarily established to incite Barelvis to counter the influence of Wahabbi ideologies.

After the Musharraf regime, the Pakistan People’s Party, which mainly consists of the descendants of Sufis such as Pirs (saints) and Pir-landlords, also started to promote Sufi values to counter the threat of extremism and terrorism by renaming the council to the‘Sufi Advisory Council’ (SAC).

These steps emboldened Barlevi clerics who then started to openly term Deobandis (another sect of Sunni Islam) as the perpetrators of violent extremism in the country.

Things changed suddenly when the Governor of Punjab, Salman Taseer gave statements in support of Asia Bibi — a Christian women who was jailed under charges of blasphemy.

It is worth noting that Barelvis, who consider themselves as Aashiqan-e-Rasool (Lovers of Prophet) believe that it is their duty to stop blasphemy.

Pervez Musharraf mainstreamed Sufi Islam  by establishing the ‘National Council for Promotion of Sufism’. The notion behind this step was that Sufism is based on tolerance and harmony. Even the United States took great interest in the project and even sponsored the Sunni Ittehad Council  — a Barelvi religious party established to counter the influence of Wahabbi ideology

In response to Taseer’s statements, Barelvi clerics began provoking their followers with slogans like “Gustakh-e-Rasool ki aik saza, sar tann say juda” (There is only one punishment for a blasphemer, he/she should be beheaded).

This slogan garnered wide acceptance and later on became the narrative of Barelvi extremists.

Some clerics even set a bounty on Taseer’s head. And soon after the world witnessed how the former Governor of Punjab was assassinated in broad day light by a member of his own elite security force. His assassination was celebrated by a majority of Barelvi clerics and followers alike.

However, as soon as Mumtaz Qadri (Salman Taseer’s assassin) was arrested, the SIC started a movement for his acquittal. However it bore no results. Qadri was executed in 2016. It was then when Barelvi clerics saw their true street power as well as a lack of any specific resistance from the state to their operations.

They also arranged religious gatherings across the country, the most famous of which is the one held in Islamabad in March 2016. TLYRA is guilty of hate speech and provoking people to directly violate the Nation Action Plan (NAP). 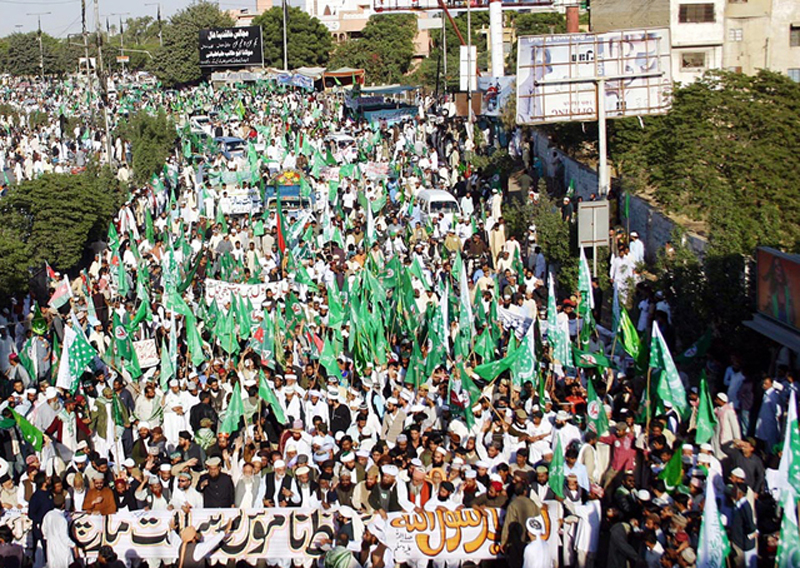 The emerging trends of Barelvi extremism, specifically on the blasphemy issue have shaken Pakistani society. Instigative speeches by members of TLYRA have resulted in a number of horrendous incidents where violent mobs have killed people. This mob justice was witnessed during the Mashal Khan murder.

Most alarming is that TLYRA wants to register itself as a political party with the Election Commission of Pakistan. Recently, TLYRA party members secured the third position with 7130 votes in the NA-120 by-election and left the Pakistan People’s Party, far behind. During their election campaign they openly used Mumtaz Qadri posters to attract voters.

The salient features of their main political manifesto are to impose the Nizam-e-Mustafa (government system of the prophet) in the country as well as securing the sanctity of the Prophet (PBUH) which means if anyone commits blasphemy, he or she will be declared wajib-ul-qatal (deserving of death).

One of its clerics, Moulvi Khadim Hussian Rizvi — who refers to himself as Ameer-ul-Mujahdin (commander of holy warriors), openly stages processions and provokes policemen and other followers to kill blasphemers. This party and its ideology, are built and based on the pillars of extremism and is being allowed to operate by the State despite repeatedly violating NAP.

It is astounding that even after losing scores of innocent people and billions of dollars in the war against extremism and terrorism, Pakistan is still not serious about countering religious extremism.

Writer is a Researcher in an Islamabad based think tank and views are those of author. He tweets at @M_S_Shahid