Twitter doubled the character limit of tweets to 280 in a surprise move on Wednesday, but not every Twitter user has been given the right to use the new limit just yet.

Jack Dorsey, who recently retook the Twitter throne, stated that the micro-blogging website needs to be of greater appeal to the masses rather than just sticking to the media, technology, and celebrities who hang out on Twitter nowadays.

This is a small change, but a big move for us. 140 was an arbitrary choice based on the 160 character SMS limit. Proud of how thoughtful the team has been in solving a real problem people have when trying to tweet. And at the same time maintaining our brevity, speed, and essence! https://t.co/TuHj51MsTu

For the time being, Twitter is rolling out the long tweets feature to a select few accounts as an experiment but with such a big change in the micro-blogging platform, backtracking from a decision to expand the character limit from 140 to 280 characters will be followed by some backlash.

Twitter’s biggest positive was how one could express themselves in a mere 140 characters, and how brief and to the point it was, but now with the introduction of the 280 character limit, the game has changed.

Right now, the 280 character limit is all the rage, and doing its rounds on Twitter, but what will become of this after the hype has died down, what attraction will this bring to the old and new user’s and how will they react to it? Just how punchy, clever and crisp will the new 280 character limit in the Twitterverse be? Only time will tell.

These are some of the questions that will not be answered until the 280 characters are available to all the twitter users at the same time.

There have been mixed reactions to the introduction of the 280 character limit. Here are some of them:

Hello world, this is a large Tweet. This tweet has 280 characters instead of the regular and boring 140, and it’s going to change everything. One more thing: you can do this yourself with a userscript in Chrome, it’s really simple to do 🙂

Interestingly Tom Warren has also mentioned how the current user’s that don’t have the 280 character available for them can utilize a simple script change to make use of this experimental change.

When an employer at an interview asks you, “Tell me about yourself in #280characters ” pic.twitter.com/Q212vlEuDH

A twitter user even made a mockery of the experimental character limit by fitting Jack Dorsey’s tweet into 140 characters. 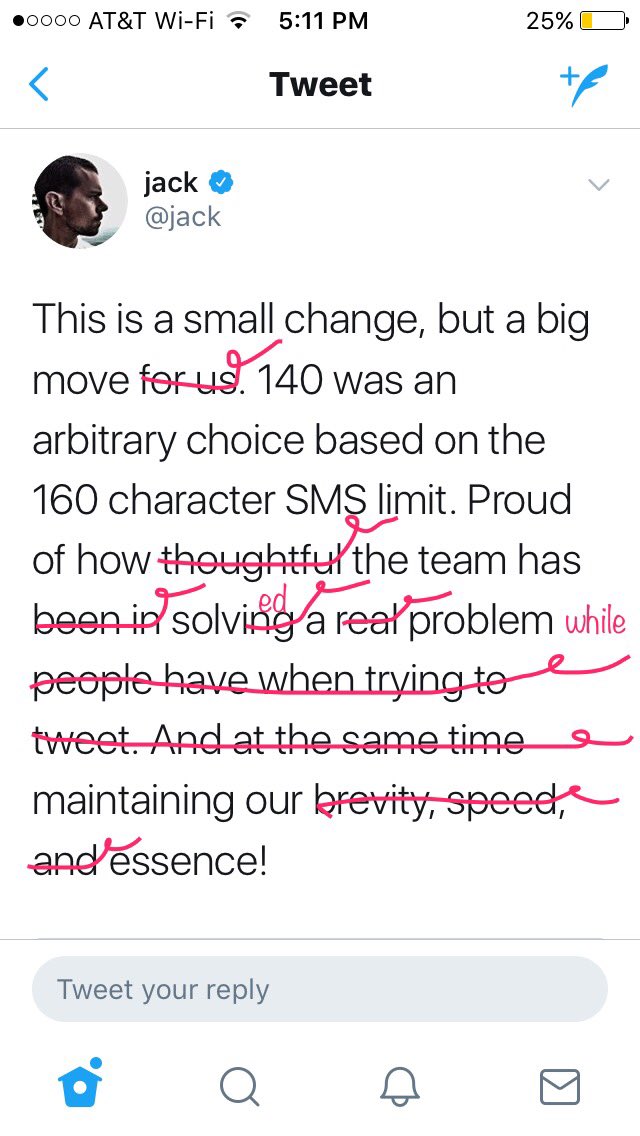 Twitter has not added an edit button on the tweets but some users desperately call it the need of the hour rather than the expansion of the character limit.

Another twitter user mocked mainstream twitter users and how they will now be forced into using the correct grammar and spell correctly otherwise they would have to face backlash from their followers.

When you realise you are part of the 99% and not the 1% #280characters pic.twitter.com/VxDTom9hkb

Waking up to find out about #280characters is horrible, if you can’t portray your ideas in 140 words then you shouldn’t been on Twitter!! pic.twitter.com/B7J2JOPX4I

The timing of this experiment was also put into question

Because #280characters is the limit #Twitter deserves, but not the one it needs right now.#twitter280