Saudi women behind the wheel

Saudi girls finally made it to the starting line! Facings exist remarks as recent as a week ago, like women ‘having half intellect’ and being too dim witted to drive a car, women in Saudi Arabia have won the right to be able to get behind the wheel, following a landmark royal decree allowing them to drive.

This was an activity they were banned from since the Kingdom of Saudi Arabia was founded. Women around the world have been moving up the corporate ladder, becoming state leaders, entrepreneurs, literary icons and even become combat pilots. Taking this into account, a development in a country allowing women to drive a four wheeled car seems trivial. For the Saudis, however it is a milestone.

Following a conservative approach adhering to strict Islamic laws, restrictions for women in Saudi Arabia are plenty. They are forbidden to appear in public without a long abaya, which covers their entire body and a headscarf, while in most cities even their face is required to be covered. They cannot go outdoors without a male guardian accompanying them and mixed gatherings are out of question.

Consent from a male guardian is also required for women to rent an apartment, open a bank account or undergo a medical procedure. With such strict rules, the vision of Saudi lifestyle which comes to one’s mind is also very rigid: beyond the façade of modernisation, a barren land with gusts of hot winds piling up sand on the already towering dunes, fierce bedouins riding on camel back and women clad in black — covering up their faces and bodies along with their minds and emotions.

To be able to put the gear in forward mode and accelerate the pace of struggle for equal rights has not come easy. Saudi women have struggled for decades

To be able to put the gear in forward mode and accelerate the pace of their lives by manoeuvring a basic transport vehicle like a car did not come easy. Saudi women have struggled for decades. In 1990, fifteen women with international driving licenses cruised around Riyadh in their cars until stopped by the religious police. They were detained, lost their jobs and were labelled ‘harlots’ in clerics’ sermons. In 2005, when a male member of the Consultative Council suggested that the ban on women driving in Saudi Arabia be reconsidered, he was accused of encouraging women mixing with men and ‘being driven by carnal instincts.’

In 2006, car showrooms were staffed with saleswomen for female buyers, who would discuss auto features, but were not allowed a test drive. Imagine the irony, to be able to learn and choose all the features of a product before buying, with the only catch being not to be able to use it personally! In 2007, a group of women collected more than 3000 signatures and sent two petitions to then King Abdullah, demanding women in Saudi Arabia  be granted the right to drive. In famous incidents, Manal Al-Sharif and Loujian al-Hathloul were arrested for driving a car, with the former having emigrated to Canada and writing a memoir ‘Daring to Drive’.

Manal cried when she heard that her daring drive six years ago, which made her lose her job and legal custody of her son, will not be illegal any longer.

The decision is crucial — not only for women’s rights in Saudi Arabia, but also for Crown Prince Muhammad Bin Salman’s modernisation project Vision 2030. The project aims to wean the country off its oil dependence and diversify its economy. 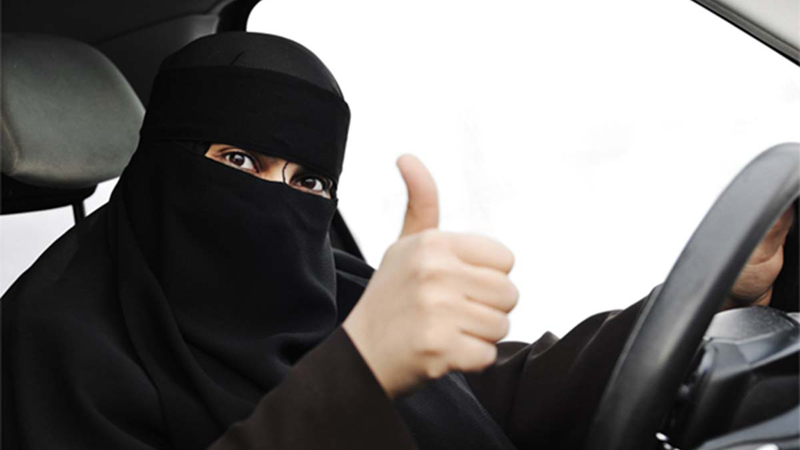 The project will see as many as 80,000 jobs created for women, with the Mayor of the eastern province appointing a female Assistant Mayor, the first woman to hold a senior municipal position. The country’s aviation training body has recently announced a one-year course for Saudi women to qualify and progress in the air traffic control profession. Soon, women will be hired to sell women’s clothing items in stores across the country, as until recently, only men would sell most products — even lingerie! But since women commuting through public transport is likely to be limited due to travel restrictions, allowing them to use independent means of transport seems inevitable.

By Saudi standards, the situation is improving. Women in the country are jubilant over recent developments, with them also being allowed to join celebrations marking the founding of the kingdom. The interior minister claims that allowing women to drive will reduce the number of car crashes in the country, which has one of the world’s worst traffic death rates.

Some of the world’s biggest car makers have swiftly responded to the lifting of ban on women driving in Saudi Arabia by targeting their car adverts directly to female buyers, with the women gleefully reacting by showing willingness to buy pink cars ‘encrusted with sparkly crystals’. Although an increase in car sales may not be in the offing, since an average Saudi household possesses up to two or more vehicles and females would need a male guardian’s permission to buy a car. With this condition of male guardianship still attached to most important decisions of their lives, Saudi women are yet to be seated in the driver’s seat of their own lives. The finishing line is miles away, but at least, the race has begun.

The writer is a senior media professional with experience in Broadcast Journalism. She has keen interest in issues related to women rights and can be reached at [email protected]