In the Roman Republic, no general with a standing army was allowed to cross the Rubicon River that separated Gaul from Italy. That was viewed as posing an unacceptable threat to the civil polity of the state.
But Julius Caesar held the republic in contempt, equating its politics with the hankering after power of rich, powerful and corrupt men (Adrian Goldsworthy, “Caesar: Life of a Colossus”, 2006). Beneath the ritualistic niceties of republican procedure, he saw chaos, corruption and violence.
Caesar’s victories in Gaul had not done much to buttress his falling fortunes in Rome. Ambitious to a fault, in 49 BC he declared defiantly, “The die is cast”. Amidst cries of “Hail Caesar”, his legions marched across the Rubicon and crossed over into history.
In one stroke, Caesar had killed the republic. Now he would have to seize Rome or be charged with high treason. When fortune delivered him a victory over Pompey (from which would spring the Roman Empire), he became “dictator for life”. That essentially was his death warrant.
Caesar’s imperial style and manner alienated his close friends including a certain Marcus Brutus. Just five years after crossing the Rubicon, they would stab him to death on the Senate floor on the Ides of March.
This raises a fundamental question. Had he seen the threat coming, would Caesar have attempted to cross the Rubicon twice? Probably not. To do so would have been an admission of defeat, since he was now the centre of power in Rome. One cannot march against oneself any more than one can march against time.
But Pakistan is no Rome. Several times in its 60-year history we have seen Pakistan’s wannabe Caesars crossing the Rubicon twice.
The first, Field Marshal Ayub Khan, saw the nation slipping out of his grip in March 1969. He asked his army chief to declare martial law, fully expecting to continue as president. But Gen Yahya surprised him by asking for his resignation and becoming the second Caesar.
The third, Gen Zia, saw in his tenth year that the Ojhri Camp explosions had given his hand-picked Prime Minister Junejo a chance to establish civilian supremacy and fired him. Zia died three months later in a mysterious plane crash.
The fourth, Gen Musharraf, fired his hand-picked Prime Minister Jamali in 2004. But one can only delay the inevitable, not change it. The year 2007 was not kind to Musharraf. When things got out of hand, he crossed the Rubicon again.
He declared an emergency, had himself validated as the president, shed the khaki uniform, and even let former Prime Minister Benazir Bhutto (about whom he had nothing positive to say in his memoirs) back into the country.
The last two acts were necessary evils that he countenanced to placate the meddlesome Americans who had lavished $11 billion on him. But under no conditions would he let back in former Prime Minister Nawaz Sharif whom he had deposed back in 1999. Sharif was his arch-nemesis, one that he had called a fascist in his memoirs.
The General calculated that the Americans were solidly backing Benazir Bhutto and that they had no interest in Sharif. This was confirmed when he deported Sharif without drawing even a murmur of a protest from Washington.
Then, out of the blue, the King of Saudi Arabia intervened. Abdullah showed surprising acumen by noting that the Kingdom’s image had suffered among Pakistanis for appearing to hold Sharif against his will.
Courtesy of the King, Sharif returned home to a tumultuous welcome and filed his nomination papers. Whether he will contest the elections in January remains to be seen. Either way, he poses a credible threat to the legitimacy of Musharraf’s presidency.
Musharraf’s worst nightmare has come to pass. He faces the daunting prospect of being stripped of his second-skin just as he gets ready to go to battle with the man who tried to put him out of commission eight years earlier.
While Pakistan’s military rulers talk of their bloodless coups, they seek to place themselves on a higher moral plane than those usurpers whose ascent to power has been much uglier. But they cannot hide from the enormous costs their interventions have inflicted on the national economy, polity and society.
Musharraf’s emergency has taken an enormous toll on Pakistan’s image. Anyone planning to visit the country or invest in it has been forewarned of the perils that await him. Pakistan is now seen as a volatile and unsafe place governed by an unseemly dictator.
The national landscape is strewn with Orwellian images:

The veneer of enlightened moderation has been stripped from the Musharraf government and all we are left with is unadulterated militarism. For these very reasons, the Commonwealth has suspended Pakistan’s membership.
The only foreign leader who still has anything positive to say about Musharraf is President Bush. He has once again given a blanket endorsement to Musharraf (a man of his word) and his policies (he is committed to bringing democracy to Pakistan). All this does is validate the low impression that most people have of Bush’s political IQ. It does nothing to improve Musharraf’s image.
So why did he impose the emergency? There was no cross-border threat. Arresting the judges of the Supreme Court and the attorneys who marched to support them was not going to bring peace to the cities. And if they were the problem to begin with, why were they released in just a couple of weeks?
It has been said that the emergency was needed to rid the nation of the scourge of terrorism. But there is not the slightest evidence that it has helped solve that problem.
One has to conclude that it was not a national emergency but a personal one that was needed to secure the presidency for one man. Musharraf has read enough history to be able to read the handwriting on the wall. Even now, he can step down and save his place in history. Will he?

Ahmad Faruqui, an American economist, is the author of “Rethinking the National Security of Pakistan,” Ashgate Publishing, UK 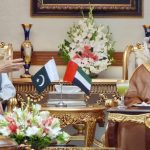