Historians may someday debate whether the financial crisis that began a year ago is most notable for how much damage it did to the United States, or how little it inflicted on the world’s major rising power, China. Helped by huge state intervention and buoyant optimism almost surreally undiminished by the crisis of confidence across the Pacific, China has had a very good downturn. It is closing the gap with the world’s most developed economies faster than anticipated and could overtake Japan as the world’s second-largest economy when the final figures for last year are tallied.
China’s already rapid emergence is changing many things, from diplomatic alliances in Africa to the status of the dollar as the world’s favorite currency. It may also open minds to a provocative thesis that, until a short time ago, might have been dismissed as breathless hyperbole.
In When China Rules the World, Martin Jacques, a columnist for The Guardian of London and a visiting scholar at the London School of Economics, argues that China will not just displace the United States as the major superpower. It will also marginalise the West in history and upend our core notions of what it means to be modern.
This bold assertion, he acknowledges, rests on the assumption that nothing will derail the political stability and economic dynamism China enjoys today. It is not clear that even the most senior leaders in Beijing share Jacques’s faith in that forecast. But the future is unknowable, and his extrapolations are, if not provable, at least plausible. The strength of his book lies in his exhaustive, incisive exploration of possibilities that many people have barely begun to contemplate about a future dominated by China.
Much of the journalism and many of the best-selling books on China treat the country’s rise as an economic phenomenon. It is presented as a developing country, albeit the biggest one, that has opened its doors to the West, allowed a Western-style market economy to flourish and exported goods to wealthy consumers abroad. Those things are true. But Jacques argues that the focus on the economic side of the story has lulled the West into a false sense of security. “The mainstream Western attitude has held that, in its fundamentals, the world will be relatively little changed by China’s rise,” he writes. Rather, he says, “the rise of China will change the world in the most profound ways.”
Unlike Britain, the United States or Germany at various times during the past 200 years, China is not emerging on the world stage as a new, powerful nation-state. It is, instead, as one Chinese writer put it, regaining “lost international status,” becoming the first ancient civilisation to re-emerge and reclaim its position as a dominant power.
China was the wealthiest, most unified and most technologically advanced civilisation until well into the 18th century, Jacques points out. It lost that position some 200 years ago as the industrial revolution got under way in Europe. Scholars once viewed China as having crippling social, cultural and political defects that underscored the superiority of the West. But given the speed and strength of China’s recent growth, those defects have begun to look more like anomalies. It is the West’s run of dominance, not China’s period of malaise, that could end up being the fluke, Jacques writes.
Skyscrapers and stock markets in China look like those in the West, of course. But Jacques argues that the country’s cultural core resembles ancient China far more than it does modern Europe or the United States. It is accumulating wealth much faster than it is absorbing foreign ideas. The result, he says, is that China is nearly certain to become a major power in its own mold, not the “status quo” power accepting of Western norms and institutions that many policy makers in Washington hope and expect it will be.
The enduring loyalty of its enormous diaspora and even the global popularity of Chinese food testify to the appeal of Chinese culture abroad. But the pervasiveness of a country’s culture depends only partly on its appeal. It also depends on strength, which China is acquiring, and scale, which it already has.
As China finds its own path economically, it is unlikely to look west for political advice, Jacques suggests. Its ruling Communist Party, having largely set aside its socialist ideology, has become a modern version of an imperial dynasty. China’s Communist leaders have flirted with reviving Confucianist thought, positioning themselves as protectors of Chinese unity, the state’s traditional role. Many Chinese see that mission as sacred. Jacques argues, credibly, that most Chinese will back their leaders, with or without democratic reforms, as long as the country keeps getting stronger.
So how might the world work under Pax Sinica? Jacques ventures some fascinating guesses: The United States often promotes democracy within nations. China insists on democracy among nations. If the power of countries in the international arena were determined by how many people they represent, China would have more clout than all the Western democracies combined.
Jacques has lived in China, and he writes about his travels there. But it seems clear that he has developed his views from reading books and newspapers (a voluminous quantity of them, to be sure) rather than through any immediate experiences in China or by getting to know its people. Possibly as a result, he dwells little on the everyday turmoil of Chinese life. But the fact that China looks messier in practice than in books does not invalidate Jacques’s thesis. —New York Times 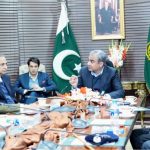