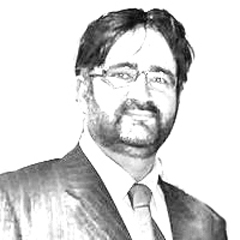 India and the peace process

A renowned political scientist of Pakistan, Professor Rashid Ahmad Khan, wrote an op-ed ‘Pakistan-India dialogue’ (Daily Times, June 10, 2011). The crux of what Dr Khan wrote is that the peace process is moving at a slow pace and there has been no breakthrough yet the fact that both sides are talking indicates their sincere commitment to improve bilateral relations. He further stated, “There are domestic as well as regional compulsions, such as the terror threat, grinding poverty, social unrest, the approaching endgame in Afghanistan, and, above all, the international community’s keen interest in preserving peace and security in South Asia, which make it imperative for Pakistan and India to respond positively and ensure an atmosphere of peace and security in the region.” Lack of trust and wide gap in the position of both countries, according to the professor, would be overcome provided the two sides demonstrate patience and statesmanship in handling the long standing and complex bilateral disputes.

This is unlikely to happen. Why? Consider: a closer look at the prevailing strategic thinking in India and its strategic vision clearly indicates that in the post-9/11 world, the Indian foreign policy establishment views Pakistan as under tremendous pressure internally and externally. In New Delhi’s view, the power configuration at the national, regional and international levels favours India and it is time to do things according to its own terms. Former Indian Prime Minister I K Gujral, some time back voiced this view when he said: “His [President Musharraf’s] country faces innumerable problems. He also finds India growing taller and taller. His friends, the Americans, have told him not to rock the boat.”

According to this strategic vision, New Delhi intends to articulate its own Indian ‘Monroe Doctrine’, by creating a cooperative security web, anchored at the two ends by its allies, with a well-armed South-East Asia and a particularly strong Vietnam. By doing this, New Delhi intends to create problems for China. That is the only understandable reason why Vietnam is considered important in this plan. New Delhi wants to establish a strong military/naval presence in the region. The ultimate objective is to be in a position to be able to provide security to the vital sea lines, Malacca and Hormuz. Eighty percent of the world’s oil passes through these lines.

Where does Pakistan stand in New Delhi’s strategic vision for its emergence as a major global player? A number of Indian strategic thinkers are of the view that Pakistan is a failed state and the country is under a strong military grip and there is no likelihood that it would loosen up any time soon in the near future. Satish Kumar in his paper, ‘Reassessing Pakistan as a Long Term Security Threat’, published by the New Delhi-based Centre for Policy Research, stated: “…Islamic extremism and militancy have become as important a reality in Pakistan as the army of Pakistan. Both of them are durable. There is a symbiotic relationship between them which cannot be wished away. Both of them are hostile to India and acting in unison their hostility will remain formidable” (p 17). He further states: “…Pakistan poses a long-term security threat to India which is inherent in the nature of the Pakistani state, its ideology, its power structure, and the imperatives which determine the behaviour of the ruling establishment. These factors are not likely to change in the next 20 to 30 years. India has to cope with this kind of adversary and its strategic capabilities and thinking, its national will and character must respond to the situation accordingly” (p 26).

Realising that the military, including the nuclear approach, is not adequate, New Delhi, for quite some time now, is working on a different approach to address its Pakistan problem. It is using the water weapon against Pakistan, a lower riparian state, by its various hydro projects, especially its projects on the headwaters of the Indus River on the Indian side and manipulating the Indus Water Treaty. Recent developments in this regard are a case in point.

What does New Delhi want to achieve when it engages Islamabad in a dialogue? The Indians want to focus on improving contacts between the two countries. They want to see an easy movement of people across the borders, not just across the established boundaries but also across the Line of Control (LoC) that divides the two parts of Kashmir. It would also like to have trade liberalisation, most favoured nation status and pipelines. What they are willing to offer in return is anybody’s guess.

An important obstacle to any success of the peace process is the different approaches Islamabad and New Delhi are following: Islamabad wants to resolve the conflicts; New Delhi wants to manage the conflicts. New Delhi is not willing to accept any solution that involves major territorial alterations, especially on religious lines because it believes that it would be detrimental to its secular identity. Islamabad is not willing to accept the current LoC as a solution.

The success of the peace process depends on the extent to which both countries, especially India, are willing to move beyond their original positions and the preconditions they attach to a dialogue. Another important factor in the success or otherwise of this process would be the Indian illusion that they are “bargaining from a position of strength”. The sooner New Delhi comes out of it the better it is for the peace process. If the present trends continue this peace process will end in another stalemate.

The writer is based at Centre for Muslim States and Societies (CMSS), University of Western Australia, Perth and a former Benjamin Meaker visiting Professor of Politics, IAS, University of Bristol and was a visiting scholar, Brookings Institution