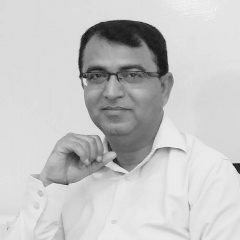 Law, morals and our leaders

There is an interesting story by Aesop about honesty, or if you may, call it ‘morality’, because either of them has something to do with one’s conscience, as according to a great man, “Conscience is God’s presence in man.” A woodman was felling a tree on the bank of a river when his axe, glancing off the trunk, flew out of his hands and fell into the water. As he stood by the water’s edge lamenting his loss, Mercury appeared and asked him the reason for his grief. On learning what had happened, out of pity for his distress, Mercury dived into the river and, bringing up a golden axe, asked him if that was the one he had lost. The woodman replied that it was not, and Mercury then dived a second time, and, bringing up a silver axe, asked if that was his. “No, that is not mine either,” said the woodman. Once again, Mercury dived into the river, and brought up the missing axe. The woodman was overjoyed at recovering his property, and thanked his benefactor warmly, and the latter was so pleased with his honesty that he made him a present of the other two axes. When the woodman told the story to his companions, one of these was filled with envy at his good fortune. Determined to try his luck for himself, he went and began to fell a tree at the edge of the river, and presently contrived to let his axe drop into the water. Mercury appeared as before, and, on learning that his axe had fallen in, he dived and brought up a golden axe, as he had done on the previous occasion. Without waiting to be asked whether it was his or not, the fellow cried, “That’s mine, that’s mine,” and stretched out his hand eagerly for the prize. Mercury was so disgusted at his dishonesty that he not only declined to give him the golden axe, but also refused to recover for him the one he had let fall into the stream.

Now let us examine this in relation to our leaders and their actions or inactions. After a recent judgment of the Honourable Supreme Court, Syed Yousaf Raza Gilani was found guilty in a case of contempt of court and sentenced to imprisonment until the rising of the court. Now generally many profess, including a particular group of lawyers and politicians, mostly belonging to the ruling parties, that though the PM (if he could morally or rightly be still referred to as such) may have lost the moral right to his august office, but legally and politically, he still has a right to his seat as he has the backing of parliament and is also the leader of the house. Some provincial assemblies have also endorsed this stance.

The question is what is ‘moral’ and whether this point ever came up for determination by our superior courts. The answer to the latter part of the question, as far as the undersigned writer’s little knowledge is concerned, is a big no. The ordinary dictionary meaning of ‘moral’, as per all standard dictionaries (including The Oxford Encyclopedic English Dictionary, the latest edition of Merriam-Webster’s Dictionary and Thesaurus (Merriam’s) as contained in the latest edition of the Encyclopedia Britannica Student and Home Edition), amongst others is as under:

In the writer’s humble opinion, we are falling into a channel full of putrefaction, defilement, abomination, etc, by undermining the concept of ‘moral authority’ by other authorities. Alas, in these so many years, our rulers have not done one good deed that the people would have felt proud of as Pakistanis.

Ours is a constitutional democracy, combining qualitative, substantive, ‘higher law’ concepts of justice and universal equality. They are derived primarily not only from Islamic jurisprudence and the conduct of the four righteous Caliphs and the Prophet (PBUH), but also from classical civilization and Judeo-Christian religions with quantitative, procedural concepts of justice and equality, the communitarian ethic of common law, republican traditions, and social contract theory.

It would not be out of place to give some quotes of some great men of learning and science. For example Immanuel Kant says, “Two things fill the mind with ever new and increasing wonder and awe — the starry heaven above me and the moral law within me.” The great Cicero says, “The law is intelligence, whose natural function it is to command right conduct and forbid wrong doing.” Another very famous and beautiful quote in this regard is by Henry Peter Brougham who said, “It was the boast of Augustus that he found Rome of brick and left it of marble. But how much nobler will be the sovereign’s boast when he shall have it to say that he found law dear and left it cheap; found it a sealed book and left it a living letter; found it the patrimony of the rich and left it the inheritance of the poor; found it the two-edged sword of craft and oppression and left it the staff of honesty and the shield of innocence.”

About morals, moral authority and morality, the famous French thinker Voltaire says, “All sects are different, because they come from men; morality is everywhere the same, because it comes from God.” “The hottest place in hell is reserved for those who remain neutral in times of great moral conflict,” said Martin Luther King, Jr, “The most important at human endeavour is the striving for morality in our actions. Our inner balance and even our very existence depend on it. Only morality in our actions can give beauty and dignity to life.” Charles Dickens said, “History is a voice forever sounding across the centuries the laws of right and wrong. Opinions alter, manners change, creeds rise and fall, but the moral law is written on the tablets of eternity.” “There is something more horrible than hoodlums, churls and vipers, and that is knaves with moral justification for their cause,” are Sir Thomas Moore’s famous words.

What the writer finds in Pakistan is that all our leaders, without many exceptions, are found lacking in moral courage or are full of misdeeds or misdemeanours or not doing things which they are morally and honestly required to do. Whether they are steel barons, or so-called champions of the masses, or indulging in the illegal trade of banned drugs or stashing away their wealth worth billions outside the country whose citizens they claim to be, they are all the same.