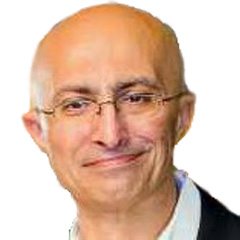 I have very clear memories of 1990, though it has been almost quarter of a century. The city once known as ‘City of Lights”’ was mostly in darkness as violence was at its peak. I was on a visit back home, and in a constant state of shock, because of the wave of terror that had completely engulfed the city. The morning newspapers were full of stories where bodies were found in bags or the bodies were burned to death beyond recognition. All of this was happening, at times, in broad daylight, in a city widely known as the commercial hub of the country. The city that was supposedly joyous after an 11-year spell of an evil dictator, and had put a young lady as its prime minister at the helm of a democratically-elected government, was experiencing some serious turf wars.

In the neighborhood, where there usually was the crude calligraphy of palmists, spiritual healers and miraculous magicians, the walls had a totally different message. Poorly and hastily spray-painted graffiti had very clear and no-nonsense messages of rebuke and scorn towards the ruling party. I stumbled upon certain public offices, relatively close to the airport area, where once Mohammad Ali Jinnah’s portrait used to rest, the same walls had found a new leader, a heavyset mustached man in dark sun glasses and a rather huge grin. The man was revered as ‘Bhai’ (Bother), ‘Quaid’ (Leader), and back then even ‘Pir Sahib’.

Fast forward to 2013, if you were to walk in certain parts of the same city, you will find the same scenery, same reverence and same devotion. Why and how the city transformed to its present state is another subject for another day. The Brother and his party, both have gone through a major evolutionary process as well. Karachi and the Big Brother are inseparable, never mind if he is physically nowhere near Karachi, but spiritually, he is in the city at all times. I am a democrat at heart and soul, which means the majority rules. No matter whether I agree with that majority or not. I find a significant segment of the city and for that matter the country in awe of the Brother, and I respect that. I personally find him hugely entertaining as he has a flair of keeping his audience captivated.

Let’s rewind now to 2007 for a bit. A political novice of a leader headed over to London, made a lot of headlines by suggesting that he was there with a mountain of evidence against the same Brother. He added in front of the TV cameras that the purpose of his visit was to present that evidence to the British law enforcement agencies. What happened in London after that is fairly well known. Oh yes, Karachi went into rage and the graffiti was back. The protests and condemnations shredding the former cricketer’s personal character gained momentum. Then 2011 happened and the novice was transformed into the full bloom leader of the Justice Movement.

When a recent senseless murder occurred in the city, where a female political leader and a teacher was gunned down by unknown assailants, the leader of the same Justice Movement made an irresponsible accusation towards the same Brother. A leader carrying the banner of justice knows very well that without any credible evidence any such accusation amounts to slander and defamation.

Karachi has gone through many episodes of violence for various different reasons for decades. The wave of violence gets curbed for a limited amount of time. Who, when, what and why are just questions of reference, but almost everyone who lives in the city, knows the unwritten and unspoken rules. The best description of it could be ‘life in an urban jungle’.

Before people criticise me for getting on my soap box, let me say this much: I live in one of the largest cities of the US, and population here is out of control as well. Despite the resources here, the city has its ghettos and violence is equally rampant. In a developed country like the US, we have gangs and the city is famous for its gang rivalries. The law enforcement agencies can only curb the violence and can never eradicate the gangs. What is often reflected on the silver screen by the dream factory of Hollywood is very true. The residents know it very well and endure it by staying in their pockets and by avoiding the so called ‘No-go areas’. They all know that in order to survive in this urban jungle, you have to follow this unwritten rule. However, none of these street gangs have any political aspirations and none of them are affiliated or even remotely related to the mainstream political players. That’s the stark difference between the city that adopted me and the city that once raised me. Both are equally ruthless and both are equally perilous in their own peculiar ways.

I remember raising this issue with one of my educators here and he laughed it off by rejecting the notion that gangs could be eradicated. His sage and philosophical assessment was that it was all about economics. There is a certain segment of society that will always remain in ghettos and even in those ghettos, there are certain unwritten rules. Embedded in those unwritten rules somewhere are very pervasive laws of supply and demand. According to his thesis, the urban jungles will always be there. In every major city with soaring population, where resources are thin, where there are inequities, where there are disparities, where there are injustices, both need and greed create a lethal mix. Getting back to 2013, I certainly hope for Karachi it is not a repeat of the 1990s. I hope that somehow the primates of this urban jungle will learn to live with one another.

The writer is a Pakistani-American mortgage banker. He blogs at http://dasghar.blogspot.com and can be reached at dasghar@aol.com He tweets at http://twitter.com/dasghar