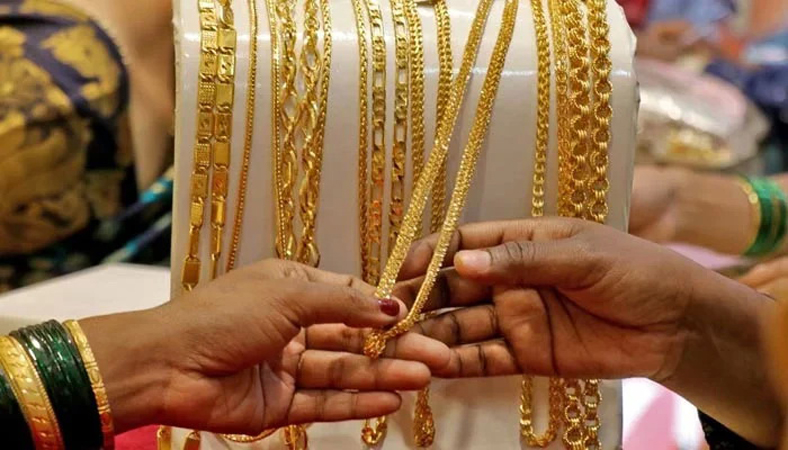 Gold prices in Pakistan hit yet another all-time high on Tuesday driven by the safe-haven appeal that continues to gain traction as the economy remains deep in the woods with the country’s foreign exchange reserves being its Achilles’ heel amid political uncertainty. According to All-Pakistan Sarafa Gems and Jewellers Association (APSGJA), the price of gold (24 carats) increased by Rs1,150 per tola and Rs986 per 10 grams to settle at Rs189,300 per tola and Rs162,294 per 10 grams, respectively. The jewellers’ body also said that local gold was “undercost” by Rs3,500 per tola in Pakistan, compared to the Dubai bullion market. Analysts said the gold was scaling new peaks every day because investors have gone gaga over it because another safe bet – the dollar -, was currently hard to come by owing to a myriad of reasons ranging from allegedly artificially maintained exchange rate and a massive disparity between legal and illegal money markets.

They added that the precious metal generally tracks world prices, which were under pressure due to the US Federal Reserve’s hawkish measures. Pakistan, the world’s fifth-most populous nation is dealing with a range of economic challenges, including a shortage of dollars and a delay in the International Monetary Fund’s loan programme for the country. World gold prices pulled back from a nine-month high on Tuesday due to a slight uptick in the dollar and US bond yields, although hopes of slower interest rate hikes from the Federal Reserve underpinned the market. Spot gold fell 0.2% to $1,927.35 per ounce by 10:20 a.m. ET (1520 GMT), after hitting its highest since late April 2022 earlier in the session. US gold futures were up 0.3% to $1,922.30. The dollar index gained 0.2% against its rivals, making greenback-priced bullion cheaper for many buyers, while benchmark U.S. 10-Treasury yields rose to a near one-week high. Gold demand in Pakistan has jumped manifold. Pakistan meets almost all its gold demand through imports, and traders follow its international price in setting rates in the country. Jewellers import the metal against the US dollar and UAE dirham before converting its price into rupees. Earlier, they were parking their savings in the US dollar to avoid the impact of rupee devaluation at a time of high inflation.

Jewellers believe that the investors started moving to the bullion market following the shortfall of the dollar in the open market. In the black market, illegal traders were selling the dollar for Rs290-300 compared to Rs229 in the interbank market.