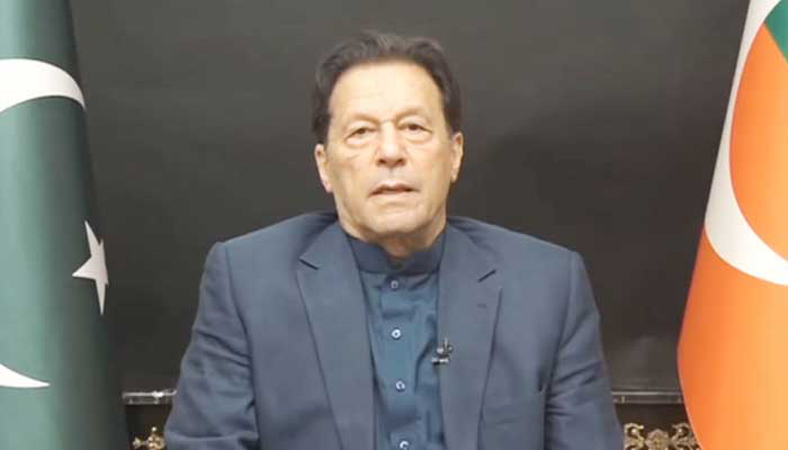 Pakistan Tehreek-e-Insaf (PTI) Chairman Imran Khan announced Monday that his party would take to the streets on Tuesday against Mohsin Naqvi’s appointment as Punjab’s caretaker chief minister, vowing that he would not accept a “corrupt” person in such a high-ranking post.

In a televised news conference, the former prime minister accused the Election Commission of Pakistan (ECP) of appointing Naqvi as caretaker chief minister to ‘rig’ the upcoming elections in Punjab. “Mohsin Naqvi has been appointed by the same people who redlined us. Now they will make all-out efforts to defeat our party in the elections through rigging,” he said.

In his address, Imran asked his supporters and party workers to stage protests outside ECP offices against Naqvi’s appointment. “I am inviting all of you to take to the streets from Tuesday for your future. If we accept his appointment then there would be no difference between us and sheep,” he remarked.

He accused the ECP of causing irreparable damage to the country, saying that he is going to challenge the appointment of the caretaker CM in court.

“I have never seen such a dishonest election commission. They always give verdicts against us. The names that we gave for caretaker chief minister were honest people.”

Continuing his tirade against the newly-appointed Naqvi, Khan said: “When I was in power, I received a report about a man who tried the most to topple [PTI’s] government. His name was Mohsin Naqvi. The intelligence bureau also gave a report on his activities.” “Mohsin Naqvi will bring all those people who are our staunch opponents,” he added.

The former premier alleged that the newly-appointed interim chief minister was a key player in the ‘regime change operation’ allegedly hatched in collusion with the US to topple his government in April last year.”The man who made all-out efforts to topple our government was Mohsin Naqvi. He would meet the former army chief and Nawaz Sharif. Neither is he impartial nor morally fit for the position,” he remarked.He further said that former president Asif Ali Zardari “considered Naqvi a son”. “You can now imagine what kind of a person he (Naqvi) is that Zardari – known for corruption worldwide – thinks of him as a son.”He further said, “In 2018, Naqvi returned Rs3.5 million to the National Accountability Bureau and accepted that he had stolen money.”Imran added that Naqvi did not possess morals or a non-partisan character. He predicted that Naqvi would appoint police officials and bureaucrats who opposed the PTI and would attempt to back the party into a corner.”They are scared of PTI’s popularity because we can’t be defeated in elections,” Imran said. He alleged that Naqvi would not allow provincial elections to take place until the electoral staff was replaced so that the former opposition’s win was guaranteed.Imran said that the aim of the caretaker government was to be a neutral umpire, adding that the nominees provided by the PTI and the PML-Q were “credible and honest”.Speaking about his key demand after being removed from the helm of power, Khan said that elections should be held in Punjab prior to the holy month of Ramadan. He added that his party would move the court against the appointment of Naqvi as caretaker chief minister and seek a date for the general polls in the province. “Just like in Karachi, the thieves want to be imposed on the country through the rigging,” he added.

He urged the masses to take to the streets against the thieves.The PTI chief maintained that his party accepted the nomination of Khyber Pakhtunkhwa’s interim CM Azam Khan after the Jamiat Ulema-e-Islam-Fazl (JUI-F) suggested the “correct name”.He slammed politicians part of the Pakistan Democratic Movement (PDM) claiming that they were saved after getting the National Reconciliation Ordinance (NRO) from former chief of army staff General (retd) Qamar Javed Bajwa.Khan went on to allege that his name had been cancelled by the very people behind political manoeuvring in the country underlining how the country suffers when politicians are unlawfully targeted. “When Sheikh Mujib Ur Rahman was targeted, the country was broken. When PPP was targeted, the [Muttahida Qaumi Movement] MQM was formed. Balochistan’s situation hasn’t improved since Nawab Akbar Bugti was targeted,” he said.Khan added that those against him and his party “have a single-point agenda on how to suppress” the PTI.Reiterating his demand for early elections, the former premier claimed that the “government knows it won’t be able to beat the PTI which is why they are not conducting elections”. “They will go towards polls when they have their own administration and staff. They want to conduct controlled elections,” he added.Speaking on the dissolution of the two provincial assemblies, the ousted premier asked who end their own government in Pakistan. “Democracy is based on ethics. It has moral standards. We brought our own governments down to move towards the elections. What they are trying to do will increase chaos,” the PTI chief said underlining how the “government is pushing the country towards trouble while his party is trying to rescue it”.