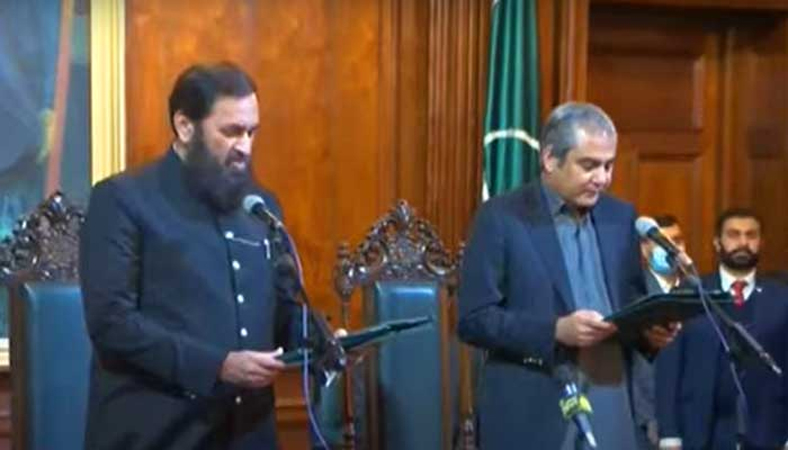 Syed Mohsin Raza Naqvi was sworn in as the caretaker chief minister of Punjab on Sunday night, hours after the Election Commission of Pakistan (ECP) decided to appoint him to the post.

Soon after the appointment of Syed Mohsin Raza Naqvi – a nominee of the opposition – the Pakistan Tehreek-e-Insaf (PTI) and Pakistan Muslim League-Quaid (PML-Q) categorically rejected the decision, declaring Naqvi as “controversial” personality.

Punjab Governor Balighur Rehman administered the oath to Naqvi at a ceremony held at the Governor House in Lahore around 11:30pm. Naqvi, who was one of the two candidates suggested by Hamza Shehbaz, is the owner of a media house and said to be very close to PPP leader Asif Ali Zardari.

The decision to appoint Naqvi as the caretaker chief minister was taken during a meeting chaired by Chief Election Commissioner (CEC) Sikander Sultan Raja. In a press release issued earlier, the ECP said that a notification regarding the appointment had been issued while a separate letter had been dispatched to the governor for administering the oath to Naqvi. The subsequent notification issued by the electoral watchdog said: “Pursuant to the proviso of Clause(3) of Article 224-A of the Constitution of the Islamic Republic of Pakistan and as a result of detailed deliberations made on January 22, the ECP has unanimously decided to appoint Syed Mohsin Rana Naqvi as the caretaker chief minister, Punjab with immediate effect.” The appointment of the caretaker CM faced an unusual delay after the dissolution of the Punjab Assembly last week due to constant back-and-forth between the provincial government and the opposition on the nominees.

Outgoing Chief Minister Pervaiz Elahi had proposed the names of Sardar Ahmad Nawaz Sukhera and Naveed Akram Cheema while Leader of the Opposition in the Punjab Assembly Hamza Shehbaz had endorsed the names of Naqvi and Ahad Cheema for the caretaker slot. The matter was referred to the electoral watchdog after a bi-partisan parliamentary committee failed to reach a consensus on the matter within the stipulated time. The election watchdog was bound to decide the matter on Sunday as the two-day time given to the commission under Article 224-A of the Constitution was set to expire.