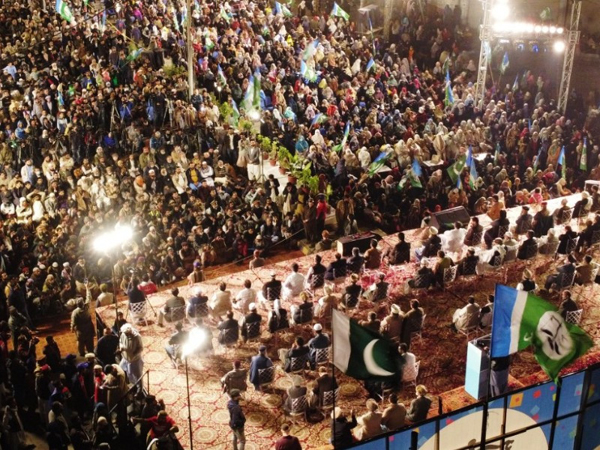 Jamaat-e-Islami (JI) Pakistan Ameer Sirajul Haq has demanded of the Pakistan Peoples Party government in Sindh to respect the mandate of Karachi. The JI Ameer expressed these views while addressing the thanksgiving convention of the JI, Karachi held at New MA Jinnah Road on Friday. The convention was held to mark the historic comeback of the party in the political arena of Karachi as the party surfaced as number one in the local government elections – with JI Karachi chief Engr Hafiz Naeemur Rehman poised to become the city mayor.

A large number of JI workers as well as the successful candidates from across the city reached the convention venue in caravans. The charged party workers chanted slogans against the “biased” PPP government in Sindh against Karachiites. JI supreme leader Sirajul Haq, in his keynote address, warned the PPP government against igniting the sentiments of Karachiites by usurping their mandate as “it will result in agitation of an unprecedented level.” Talking about the future course of action, he said that Engr Naeemur Rehman will carry forward the legacy of Father of Karachi Abdul Sattar Afghani and Nematullah Khan. On the occasion, he sought cooperation and support from the traders and industrialists fraternities in the mega city for the progress and development of the economic nerve of Pakistan. He also sought the cooperation of each and every Karachiite, interested in the future of the city.

JI Karachi chief Engr Naeemur Rehman in his speech said that following the local government elections, the JI has surfaced as the largest political and social reality in the city.

Talking about the future course of action in Karachi, he invited all political parties – elected in the local government polls – including the PPP, the Pakistan Tehreek-e-Insaf and the Pakistan Muslim League-Nawaz to develop a consensus for the betterment and progress of the city under the leadership of the JI’s mayor.