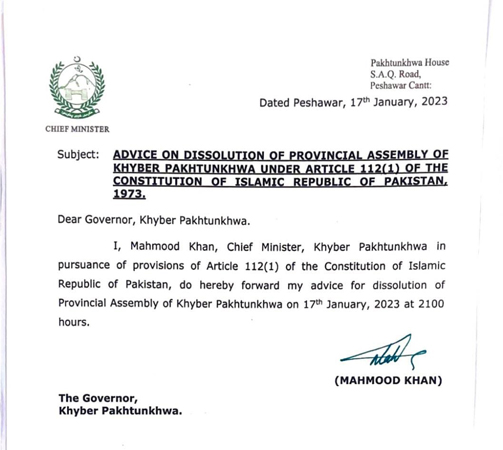 Khyber Pakhtunkhwa Chief Minister Mahmood Khan advised Governor Haji Ghulam Ali on Tuesday to dissolve the provincial assembly. The development came days after Chief Minister Parvez Elahi dissolved Punjab Assembly after Governor Baligh Ur Rehman refrained from signing the summary sent to him. “I, Mahmood Khan, Chief Minister, Khyber Pakhtunkhwa in pursuance of provisions of Article 112(1) of the Constitution of the Islamic Republic of Pakistan, do hereby forward my advice for dissolution of Provincial Assembly of Khyber Pakhtunkhwa on 17th January, 2023 as 2100,” the advice signed by the CM read. The chief minister said that the decision to dissolve the assembly had been taken in the wider interest of Pakistan. In a video statement, the KP chief executive said: “I promised Imran Khan that I would sign the summary for the dissolution of the provincial assembly by 10pm and I did.” He added, “We have done whatever we could for our people. Now, the assembly will be dissolved and elections will be held within 90 days.”The PTI would return to power with a two-third majority not only in the province but across the country, he added.

CM Mahmood’s advice for the dissolution of the Punjab Assembly is now pending with Governor Ali. However, the assembly will stand dissolved in the next 48 hours as per the Constitution even if the governor does not approve it. The PTI chairman had announced the dissolution of the assemblies – Khyber Pakhtunkhwa and Punjab – in November last year. However, the plans were delayed due to consultations with allies and countermeasures adopted by the ruling allies in the centre.