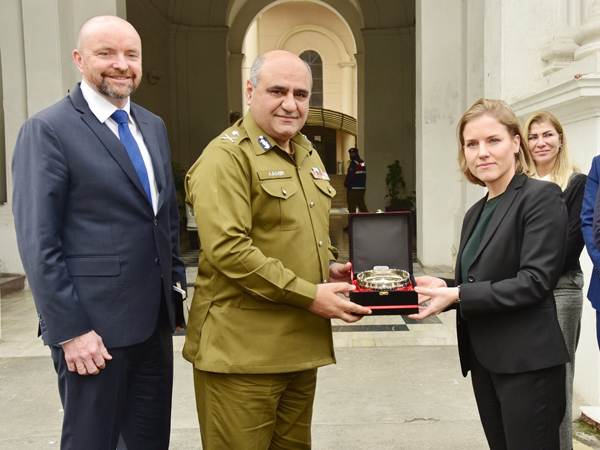 The Inspector General Police (IGP) Punjab Aamir Zulfiqar Khan visited various branches of the Central Police Office here on Thursday. The IG Punjab reviewed the working of various branches including Secret, Discipline, Training and Welfare and inquired about the performance of office affairs from the branch heads.

The IG Punjab said that increasing efficiency of police employees and providing them with the best working environment was my first priority. He said that the staff of IG Punjab should perform the office duties with hard work, dedication and spirit of public service. He warned the officers and employees, and said that delay in action or correspondence regarding citizens’ problems would not be tolerated at any level, so they should complete their daily work with full dedication. Aamir Zulfiqar Khan directed the AIG admin to complete all the development projects in CPO within the stipulated time and there should be no compromise on the quality of work.

The IG Punjab listened to the problems of employees performing their duties in various branches and issued orders on the spot for its resolution. The employees expressed their gratitude to the IG Punjab for the immediate resolution of their problems and vowed to work more diligently. The IG Punjab expressed dissatisfaction regarding the cleaning arrangements in the CPO building and directed to take further measures in this regard. He also directed to conduct mock exercises for improving security arrangements. During the visit, Additional IG Welfare and Finance, AIG Development and AIG Admin briefed IG Punjab about various ongoing development works at different floors of CPO building. The IG Punjab directed that offices should be upgraded according to modern working standards, so that the staff can perform their duties in the best environment.

The IG Punjab said that supervisory officers should use all available resources for the welfare of the subordinate force, especially the constabulary, drivers, security personnel and lower rank employees and other staff.

On this occasion, Additional IGs Training, Logistics and Procurement, DIGs Operations and Headquarters along with other officers were also present.

The eight-member delegation, headed by Country Head Jeremy Milsom, also included the officials of the Royal Embassy of Norway. The delegation agreed to continue joint projects regarding capacity building of staff working at the women and juvenile facilitation centres.

The IGP said establishment of women and juvenile facilitation center in Gujranwala, with the support of the UNODC, was commendable, which would help in prevention and effective investigation of gender and child related crimes. He called for starting work for establishment of more such centers in Lahore and Rawalpindi. He said that specially trained and expert women and officials have been posted for investigation of gender-based and child-abuse cases at women and juvenile facilitation center of Gujranwala.

Delegation head Jeremy Milsom said that the UNODC would impart modern investigative skills to investigating officers and Punjab Police Master Trainers. Likewise, capacity building of investigation officers should also be increased by imparting them with modern training with regard to narcotics control under e-learning.