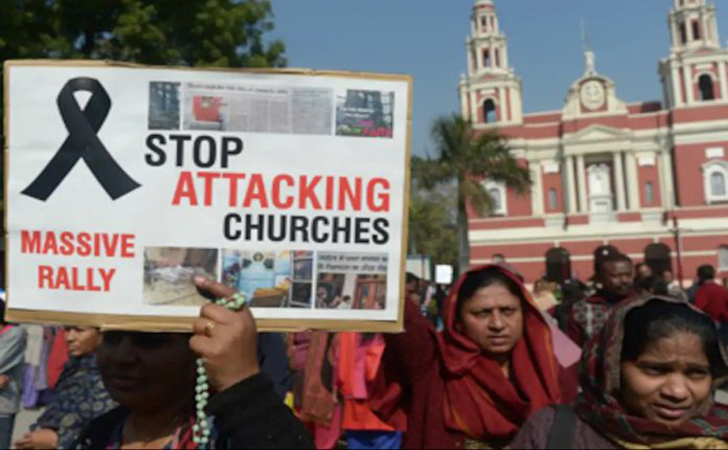 The recent attacks on churches and Christians in Chhattisgarh, Karnataka, and elsewhere in India post-Christmas and on New Year celebrations indicated continued violence against Christian minority with alarming regularity.

According to a report of Deccan Herald, unfortunately, the state authorities had been found to be failing to provide a conducive environment of equality for all of its citizens.

In the latest incident, hundreds of villagers armed with sticks and iron rods marched into Sacred Heart Church in Narayanpur district, Chhattisgarh, and vandalised the church.

Over 1,000 indigenous people following the Christian faith were driven out of their homes in the villages near Narayanpur in the past couple of months.

A church in Periyapatna near Mysuru was allegedly vandalised in late December, where miscreants damaged the idol of Infant Jesus, ransacked the altar, and took away the offerings box. Another report by the Times of India said that on the eve of new year celebrations, Assam police had sought details of the churches established in the last one year in the state and the instants of conversions, which had created a sense of insecurity among the Christian organizations and spoiling the Christmas mood.

“In many cases, the police and members of India’s governing party are helping them, government documents and dozens of interviews revealed. In church after church, the very act of worship has become dangerous despite constitutional protections for freedom of religion,” it added.

To many Hindu extremists, the report said, the attacks were justified – a means of preventing religious conversions.

To them, the possibility that some Indians, even a relatively small number, would reject Hinduism for Christianity is a threat to their dream of turning India into a pure Hindu nation.

Many Christians have become so frightened that they tried to pass as Hindu to protect themselves.

But the organized assaults against churches were propelled by a growing anti-Christian hysteria that is spreading across this vast nation, home to one of Asia’s oldest and largest Christian communities, with more than 30 million adherents.

“In the past few years, Modi and his Hindu nationalist party have tugged India far to the right, away from what many Indians see as the multicultural foundation Nehru built. The rising attacks on Christians, who make up about 2 percent of the population, are part of a broader shift in India, in which minorities feel less safe,” it added. The report said Modi was facing increasing international pressure to rein in his supporters and stop the persecution of Muslims and Christians.

The United States Commission on International Religious Freedom, a government body, recommended that India be put on its red list for “severe violations of religious freedom”. According to the United Christian Forum (UCF), an inter-denominational organisation fighting for the rights of Christians in India, the most hate crimes against Christians in 2022 took place in Uttar Pradesh, Chhattisgarh, and Jharkhand.

UP led the table with 121 hate crimes, followed by Chhatisgarh with 85 and Jharkhand with 39. Karnataka and Tamil Nadu were next, with 27 and 26 hate crimes, respectively. The attacks against Christians have increased after several states passed anti-conversions. “Christians are being suppressed, discriminated against and persecuted at rising levels like never before in India,” said Matias Perttula, the advocacy director at International Christian Concern, a leading anti-persecution group. “And the attackers run free, every time.”

The most recent flare up in India – the 10th worst country in which to be a Christian, according to a 2022 report by religious liberty advocacy group Open Doors – began around Dec. 9, when Hindu mobs began attacking Christians in outrage over some locals converting to Christianity. Many Christian villagers were assaulted and beaten with various makeshift weapons. At least two dozen people had to be hospitalized with injuries. According to Open Doors, India’s anti-conversion law was introduced and tabled during this winter season – and they were worried that it would lead to more attacks against Christians and other minorities during the Christmas season.