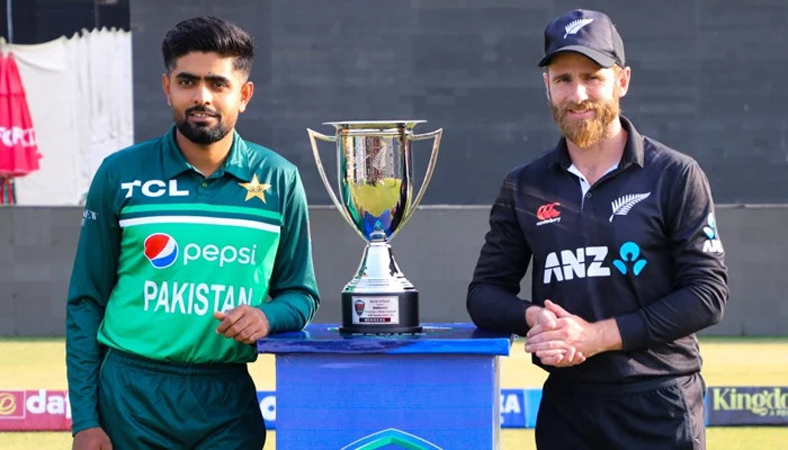 KARACHI: Skipper Babar Azam and his charges will be looking to whitewash New Zealand and top ICC team rankings when they take on the visitors in the first match of the three-match ODI series at National Stadium here on Monday (today). The remaining matches are on Wednesday and Friday, also in Karachi. If Pakistan whitewash New Zealand 3-0 during the three-match series, they will jump to the number one spot in the rankings with 114 rating points. The Men in Green are currently in fifth place with 107 rating points, while Zealand are at the top of the table with 116 rating points. The preceding Test series between the two teams failed to produce a result in either of the two Tests — both in Karachi — ending a miserable season for both teams. Pakistan failed to win any of their three Test series at home, losing four of the eight Tests including their first-ever 3-0 whitewash at the hands of England. New Zealand also failed to win any of their last six Tests. If Pakistan win the ODIs against New Zealand, it will be their fourth series win in a row. In their previous three ODI series, Pakistan have defeated Netherlands, West Indies and Australia.

Ahead of the limited overs series with New Zealand, Pakistan skipper Babar Sunday responded to the criticism directed towards his captaincy. The 28-year-old captain spoke about being focused on winning matches for the country rather than paying heed to the criticism. “My job is to play cricket and enjoy it. I don’t need to satisfy or answer anyone. I know what my game and responsibility are while batting or captaincy. I don’t need to make anyone happy, my job is to win matches for Pakistan,” Babar said while addressing a press conference in Karachi.The skipper also remained tight-lipped on Pakistan’s playing XI for the first ODI match. “I have not looked at the pitch. We will decide on our playing XI after assessing it. We will try to field our best XI,” Babar said, adding that the team would try to continue their momentum in white-ball cricket. The Pakistan skipper also stated that the selectors and team management were on the same page. “The captain, coach and chief selector are on the same page because that’s important for the betterment of the team. We conveyed our opinion to the chief selector on the selection of players,” he said.

Babar was confident his team would do well in the limited over matches. “Pakistan has proved themselves to be a good white-ball team and this series provides us a perfect launching pad to kickstart our World Cup preparations,” Babar said of the World Cup in October-November this year. Azam’s team won eight of the nine one-day internationals last year, including a 2-1 series win over a formidable Australia at home. “We are a well-rounded side with solid batters and bowlers who have proved themselves time and again so I am confident of doing
well in the coming series,” said Babar. Pakistan will miss pace spearhead Shaheen Shah
Afridi who is recovering from a knee injury sustained in November last year, while spinning allrounder Shadab Khan is also out with a recent finger fracture. Opener Fakhar Zaman will bolster the batting, as will Haris Sohail — recalled after two years.

New Zealand, runners-up in the last World Cup in 2019, won ten of their 16 ODIs last year and have a strong unit led by stylish batter Kane Williamson. They have been dominant against Pakistan, having won 12 of the last 15 ODIs between the two teams. Williamson is also concentrating on World Cup, having relinquished Test captaincy. “I felt that continuing to captain the white-ball formats was preferable with two World Cups in the next two years,” Williamson said last month, referring to the 2023 ODI and 2024 T20 World Cups. New Zealand pacer Matt Henry is also out of ODIs with an abdominal strain sustained on the final day of the drawn second Test. They are already missing pace trio Trent Boult, Kyle Jamieson and Adam Milne — for varied reasons.