Imran always tells me to hold my nerves: Elahi 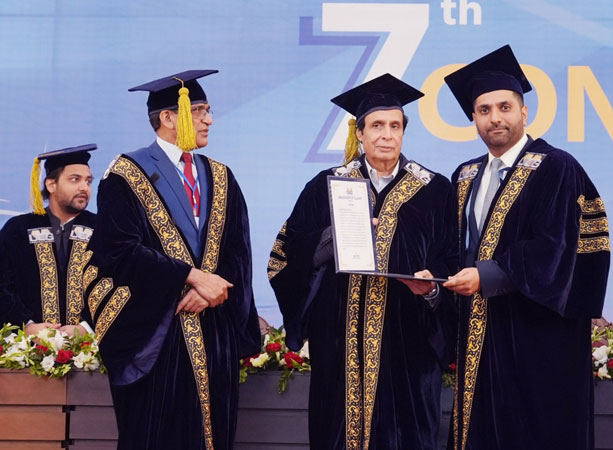 Chief Minister Punjab Chaudhry Parvez Elahi said that Imran Khan is an honest and a straightforward person. Neither he is a coward nor kneels down before anyone and believes in doing constructive work. Wherever someone says anything wrong about Imran Khan then I give a befitting reply, CM stated. Imran Khan urges everyone not to get afraid of anything, work hard and then leave the result at the mercy of Allah Almighty. Chief Minister Punjab Chaudhry Parvez Elahi while addressing the 7th Convocation ceremony at the University of Gujrat stated that the number of lies which Shahbaz Sharif has spoken in his life time have no precedent. Shahbaz Sharif’s name is included in the Guinness Book of world records on telling lies however Sharif brothers have hidden it. Shahbaz Sharif closed Chaudhry Parvez Elahi Institute of Cardiology Wazirabad after coming into power. Shahbaz Sharif has been badly exposed after coming into power. CM stated that the PDM gang has brought massive price-hike in the country and whenever they come into power they take away dollars with them abroad adding that they ask Ishaq Dar to bring the dollars back. If the rulers are dishonest then they are deprived of the blessings of Allah Almighty. CM underscored that Imran Khan even sitting at home is working for the betterment of Pakistan. We are moving towards betterment of our future after ascertaining right direction under the dynamic leadership of Imran Khan. Imran Khan created a revolution in the health sector through the health card scheme.

The CM stated that he often gives his point of view before Imran Khan which often proves correct adding that we have set the direction right to make a progressive nation under the leadership of Imran Khan. Experience has its own course which often proves correct. CM highlighted that our intentions are honest and we are moving in the right direction. If the intensions are noble then Allah Almighty also grants help. PML-N made a propaganda that how come they can arrange money and by the grace of Allah Almighty we have plenty of money and also thank Allah Almighty. CM revealed that we are also utilizing the Ehsas Programme for the rehabilitation of flood affectees adding that monthly assistance will be given to a family having two children. We are providing free education and books to the children and have increased the stipends of children to 100 percent. Nazra and Quranic translation has been made compulsory for students in schools and colleges. CM stated that we are not doing any wrong work and will be blessed with success adding that we are laying the foundation of our new generation on religion. We have done a lot of work with regard of religion and a historic work has been done on the matter of Khatam-e-Nabuwat (SAW). The objectives behind providing excellent education, health and treatment facilities are to obtain the target of making Pakistan a welfare state.

The CM stated that Gujrat is not a district but a division and adding that Gujrat will be made a center of excellence by all means. No one will need to go abroad for undergoing treatment or getting education. Doctors will also be hired from abroad. 700 bedded Children Hospital will be established in Gujrat and better surgery equipments then cyberknife for the treatment of cancer will be introduced.. A separate dental college will be established in Gujrat and Chaudhry Parvez Elahi Institute of Cardiology Wazirabad will be upgraded from 200 beds to 400 beds. CM further stated that Gujrat Industrial Estate under one widow operation will be launched in coming six months. Development projects have been launched in Mandi Bahauddin, Hafizabad and Wazirabad. CM while addressing the convocation stated that the presence of 62 percent female students in the Gujrat University gives an excellent example of women empowerment. The environment has changed entirely with the establishment of a university in Gujrat as educated youth have eliminated the culture of fight and quarrel. CM said that he is overjoyed to know that the sapling which was planted in the shape of Gujrat University has become a strong tree. CM appreciated the performance of Vice Chancellor of Gujrat University and stated that Prof. Dr. Shabbar Atique and his team is doing an excellent work. He said that no country can make any progress without attaining education nor a strong nation can be built. Allah Almighty blessed upon him the opportunity to serve the people again. The land of Gujrat holds the distinction of having two Nishan-e-Haider. CM announced to establish state-of-the-art Engineering University at the cost of Rs.9 billion in Gujrat.

The students after getting education from the Engineering University will also be given employments. CM further announced that girl hostels will be set up in the University of Gujrat worth Rs.42 crore adding that Rs.15 crore will be disbursed to the University of Gujrat for purchasing 8 new buses. IT lab at the cost of Rs.4 crore will be established in the Gujrat University and we are also planning to build an auditorium in collaboration with US Aid and other philanthropists. Earlier, Vice Chancellor University of Gujrat Professor Doctor Shabbir Atique presented a thanks giving address. Lord Wajid Khan was conferred an honorary degree of Doctorate. CM awarded gold medals to 123 male and female students including Ghazala Yasmin, Hafiz Mohsin Ali, Kiran Sarfraz. MNA Hussain Elahi, MPA Abdullah Yousaf, Mian Imran Masood, Chairman Punjab Higher Education Commission Dr. Shahid Munir, Prof. Dr. Nizam-ud-Din, Secretary Finance Mujahid Sher Dil and Secretary C&W Dr. Sohail Awar were also present in the convocation ceremony.

Chief Minister Punjab Chaudhry Parvez Elahi visited the residence of Provincial Advisor Khalid Mahmood Cheema. CM expressed his deep sense of sorrow and grief with Khalid Mahmood Cheema over the death of his brother Iftikhar Ahmed Cheema. CM expressed his heartfelt sympathy and condolence with Khalid Mahmood Cheema and the bereaved family. CM offered Fateha for forgiveness of the departed soul and prayed to grant fortitude to the bereaved family. CM prayed that may Allah Almighty rest the departed soul in eternal peace and grant patience to the heirs to bear this irreparable loss. Political Assistant Asif Bhatti and Chaudhry Irfan Ehsan were also present on the occasion.