Neither snap nor delayed polls 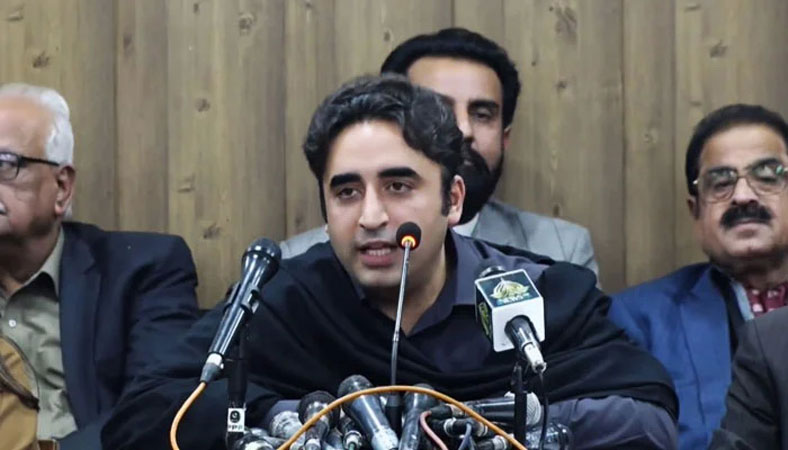 Addressing a press conference following a meeting of the PPP’s Central Executive Committee (CEC) in Lahore, Bilawal said the PPP will protest if the upcoming general elections are held early or if they are delayed. He also that his party would prepare a code of conduct for all the political parties. In this regard, his party would contact all the ruling and the opposition parties, the foreign minister said.

The PPP CEC formed a committee to seek feedback from all political parties in parliament and other parties outside the parliament, to chalk out pathway for future politics in Pakistan other than managing day to day political affairs. Bilawal said that party’s CEC appreciated the National Security Committee’s decisions but also wanted that the parliament should take ownership of it.

Reacting to Punjab Chief Minister Chaudhry Parvez Elahi’s statement wherein he ruled out following Governor Baligh-ur-Rehman’s orders for taking a vote of confidence and termed the directions “illegal”, the foreign minister said that he has to take the confidence vote if he wished to continue holding the office.

Berating the incumbent government in Punjab, the minister said that the real estate mafia has been given a “free hand” in the province. “In the past, Usman Buzdar was doing corruption for Gogi and now Parvez Elahi is playing the same role,” the PPP chairman alleged. Congratulating the PPP CEC for ousting the former premier Imran Khan last April through a vote of no-confidence, Bilawal said that he did not agree to the views of some who looked with disdain on the announcement that the establishment will remain ‘neutral’. “I believe this announcement should be welcomed,” Bilawal said, adding that he knew many in his party who had struggled for long to see this day.

“CEC also appreciates former COAS (Gen Qamar Javed Bajwa) for accepting the past mistakes of the institution…PPP looks forward to see them fulfilling their promise.”

Bilawal also claimed that the Pakistan Tehreek-e-Insaf (PTI) Chairman Imran Khan was well aware that his party could not form its government sans the establishment’s support. “Imran Khan knows that he cannot come into power without the help of the establishment. In this stage of life, he should become a democratic man,” he added. The PPP chairman also hit back at the PTI for online criticism of his recent visit to the flood-affected families in Sindh. “We went there for children, not politics. The children were happy to meet us.” Bilawal said that he did not pay heed to threats from terrorists. He said terrorists are inhuman, who kill innocent kids and burnt professors in front of school kids (in Army Public School, Peshawar). He added that Imran Khan gave NRO to the terrorists of APS as he invited terrorists from Afghanistan due to his policy of appeasement.

Bilawal said PPP wants the country to be led through the parliament and drag it out of the crisis of polarization and hate-filled politics left behind by Imran Khan. He said the politics of ‘my way or highway’ style of politics will work no longer. Bilawal said Naveed Qamar will head a committee that will come up with the PPP narrative on fixing the economy and later these points will be presented before Federal Finance Minister Ishaq Dar. Bilawal urged judiciary to hear Judicial Reference pending before the apex court for the last 12 years. He also asked Interior Minister Rana Sanaullah Khan to play its role to send again the judicial reference. He said ZAB saved Pakistan and a founder of 1973 Constitution. He clarified that he was not criticizing the incumbent judges but the past judges who gave verdict against the ZAB.

During his press conference, Bilawal said that while they mark the 95th birthday of PPP founder, former prime minister Shaheed Zulfikar Ali Bhutto, 2023 also marks Bhutto’s ‘greatest gift’ to Pakistan – the constitution of 1973. He said that slain former prime minister Benazir Bhutto struggled for 30 years for the restoration of this constitution and ultimately died trying to have it restored while it was finally restored by former president Asif Ali Zardari during his tenure from 2008-2013. He added that the party’s CEC had decided that the ongoing year will be marked as the golden jubilee of the 1973 Constitution. In this regard, the PPP will hold events and ceremonies in four provinces to educate young about the Constitution and to pay homage to the founder of Constitution. PPP Secretary General Farhatullah Babar 2023 shared resolution of the CEC and informed that PPP CEC decided to celebrate 2023 as the golden jubilee of 1973 Constitution. Federal Minister Sherry Rehman, Naveed Qamar, Nisar Khoro, Sindh Chief Minister Murad Ali Shah, Farhatullah Babar and other party leaders also attended the PPP CEC meeting.