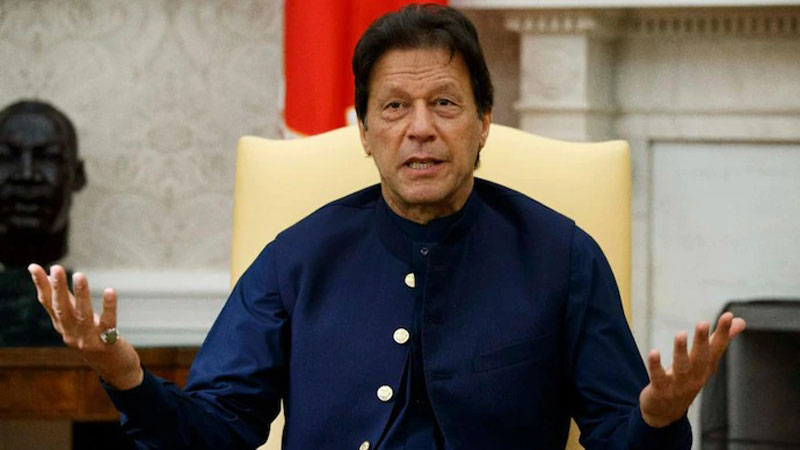 “For 30 to 40 years, we did not consider increasing exports. Pakistan won’t be able to stand on its feet for as long as the exports don’t increase. When I met exporters, they informed me about the obstacles,” the PTI chairman revealed.

Circling back to his demand for elections in the country, the former prime minister said: “The economy is linked to politics. It cannot improve without political stability.” He said that elections were the only solution to get the country out of the economic crisis. “The election is necessary to end instability. No matter what initiative is being taken, the election is the only solution,” the PTI chief said.

Advising the ruling government in the Centre about its decisions regarding the International Monetary Fund (IMF), Imran Khan said that approaching the IMF raises the issue of autonomy.

Talking about his government’s performance in line with managing the economy, the PTI chairman said that the growth rate was 5.7% to 6% in his tenure and the statistics were presented in the cabinet. “When the growth rate statistics were presented before the court, the members weren’t believing. It was the best performance in Pakistan’s history,” the ousted premier said, further claiming to have created 5,500,000 jobs in the country.

He also spoke about including taxpayers in the system in collaboration with the National Database and Registration Authority (NADRA) and refraining from increasing the prices of petroleum products. Globally, Imran Khan said, the prices of edible oil and coal increased; however, his government still kept them low. “We developed the Ravi City plan to save Lahore in an attempt to bring investment from overseas Pakistanis. We tried to bring foreign investment to increase our servers,” he shared during his address. Highlighting the economic progress during his party’s rule up until April last year, the ousted PM claimed that owners of textile industries spoke about not finding enough workers. He also alleged that his government was targeted with the propaganda that he (Imran Khan) was “destroying the country”.

Pakistan, according to the PTI chairman, should be managed like never before. “Major changes in the system of governance will have to be introduced in the country to improve its economy. Establishing the rule of law has become inevitable,” he said, underlining how Pakistan is facing challenges of unemployment and inflation at present. “Investors don’t trust Pakistan’s system of justice,” the PTI chief claimed. He added that a fair and transparent election was the first step to finding solutions to all issues.

“A government with a mandate should arrive and take tough decisions because the imported government cannot. This government came to power through action not election,” Khan alleged. Recalling his discussions with former chief of army staff (COAS) General (retd) Qamar Javed Bajwa, the former prime minister said that he had become a ‘jack of all trades’.”Gen Bajwa told us to fix the economy and forget accountability. He lectured us on giving NRO [National Reconciliation Ordinance to political parties in the opposition] and focus on the economy,” Khan claimed. The PTI has painted a bleak picture of the economy as it released a white paper on the economic situation of the country, blaming the PML-N-led coalition government of pushing the economy into a tailspin.

The white paper, which was unveiled on Tuesday at a ceremony in Lahore, said inflation had increased by 45 per cent during the last eight months under the coalition government. Skyrocketing inflation and flawed policies of the PDM government have made life miserable for the masses, it said. The opposition party in the document said all economic indicators including exports, remittances, foreign direct investment and others have deteriorated since the coalition government came into power in April last year. Due to the shortage of dollars and depreciation of the rupee, hundreds of workers have been rendered unemployed as industrial units were forced to shut down their production plants, it added. Moreover, it said the agricultural sector also suffered due to “unwise actions of the government”. The PTI further said that Pakistan has to pay back $127 billion dollars in external debt, of which the largest loan was from the International Monetary Fund (IMF) and 37 per cent of Pakistan’s total GDP would be spent on servicing this debt. The white paper said poverty, unemployment and inflation are bound to increase further whether the government accepts IMF’s tough conditionalities or push the country towards default by refusing to revive the global lender’s bailout package.

* Inflation increased by 45 per cent during last eight months

* Exports, remittances, FDI and others have deteriorated since April

* Pakistan has to pay back $127 billion dollars in external debt