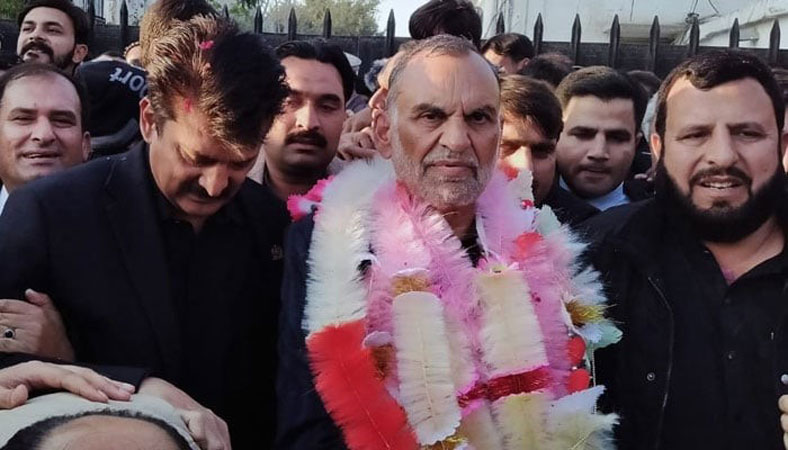 The Pakistan Tehreek-e-Insaf’s (PTI) Senator Azam Swati was finally released from jail in connection with the case of controversial tweets on Tuesday.

A day earlier, the Islamabad High Court (IHC) granted bail to Swati but he could not be released due to the unavailability of the court’s written orders about his bail. The court accepted the PTI leader’s bail application against surety bonds of Rs200,000.

Earlier in the day, Swati’s counsels presented the receipt of the surety bonds and a copy of the ruling in the court of Special Judge Central. Meanwhile, the judge issued his release orders.

However, after completing the legal process, the PTI leader’s lawyers reached Crime Investigation Agency (CIA) Centre Islamabad as the office was declared as sub-jail. After receiving the legal documents, the authorities released Swati.

Swati has been behind bars since November 27, when he was arrested for the second time for using abusive language against the top military brass, including former army chief General (retd) Qamar Javed Bajwa. The septuagenarian hurled swear words at Bajwa.

Swati had filed a plea seeking release on bail in IHC in relation to the case filed against him on November 26. His earlier plea, filed on December 21, was dismissed by trial court judge Azam Khan, who said that the senator had committed the same offence twice.

In his application, the senator stated that he did not post derogatory remarks against any institutions. He added that the prosecution has no proof against him despite an investigation.

The application read that Swati is 75 years old and a heart patient and that jailing him would be a sentence without conviction as all evidence against him is documentary.

Swati was booked in multiple cases across the country for his controversial tweets against senior military officers.