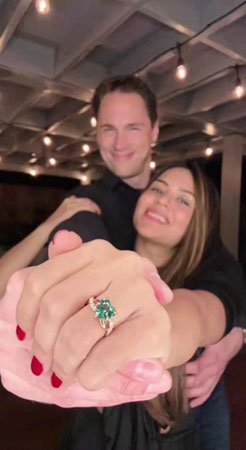 Sana Saeed said yes to her LA-based boyfriend, as Csaba Wagner went on one knee with the ring for her. The two got engaged in la la land on new year’s eve.

The ‘Student of the Year’ actor broke the news on the photo and video sharing application on Sunday with a short video of her special moment. The clip sees the couple twin in black outfits when Wagner popped the question to Saeed in an indoor area. The celeb also flaunted her stunning engagement ring in the video, with Taylor Swift’s ‘Love Story’ playing in the background. Without any words, Saeed only added a few emojis including a red heart and a ring in the caption of the Insta reel.

A number of social users including the entertainment fraternity sent heart-warming wishes and congratulatory messages for the new couple via the comments of the post.

Sana Saeed rose to fame as a child actor for her work in films including ‘Kuch Kuch Hota Hai’, ‘Badal’ and ‘Har Dil Jo Pyar Karega’. After growing up, she returned to films and dramas and played a pivotal part in Karan Johar’s ‘Student of The Year’.