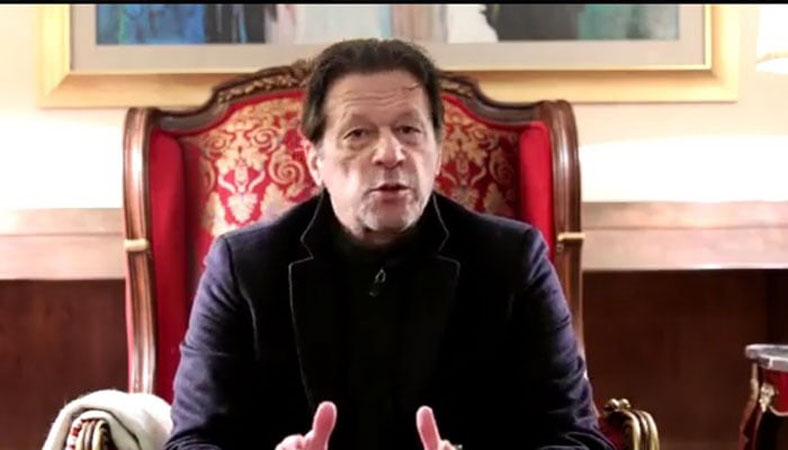 While talking to journalists in Lahore, the PTI chief said ex-envoy Husain Haqqani was “hired” by Gen Bajwa in the US to lobby against him. “Pakistan’s former ambassador to Washington “Haqqani kept campaigning against me and kept promoting General [retd] Bajwa,” he said. During the talk, the former premier also claimed that the relations between him and the former army chief soured because Gen Bajwa “did not want accountability in the country”.

Recalling the last meeting that took place between him and the ex-COAS, Imran said “Bajwa said that you are a playboy”. To which, the ousted prime minister said that “yes I have been a playboy.”

The PTI chief furthered that the “establishment can play an important role in getting out of all crises, including the economy.”

Continuing his tirade against the former army chief, Imran Khan alleged that Chief Election Commissioner (CEC) Sikandar Sultan Raja used to do what Gen Bajwa would tell him to do. He said even Gen Bajwa was controlling the issue of electronic voting machine. “Gen Bajwa was 100% behind the CEC,” he claimed.

The PTI chairman alleged that the CEC was playing in the hands of the Pakistan Muslim League-Nawaz (PML-N).

Talking about the ruling coalition filing a vote of no confidence against Punjab Chief Minister Pervaiz Elahi, Imran Khan said that “the establishment had asked our [PTI’s] three members of the Punjab Assembly to remain neutral for the vote of confidence.”

The PTI chief said the country will only progress when the army and all political parties would be on the same page. The military operation, he went on to say, is not the solution to any issue, adding that he always raised his voice against operations in Waziristan.

“The MQM factions are being united and Balochistan Awami Party (BAP) leaders are included in the PPP (to counter the PTI in the next election),” Imran Khan added.

Stressing the need for free and fair elections, the PTI chairman said that transparent elections will bring stability to the country. He also slammed the “game of audio leaks” in the country. The PTI chairman criticised Foreign Minister Bilawal Bhutto Zardari and said he “knows nothing about Afghanistan” and claimed that his government had an “excellent” relationship with the current Afghan government.

Criticising the appointment of Najam Sethi as the chairman of the Pakistan Cricket Board’s (PCB) Management Committee, Imran said “he does not know the ABC of cricket”. “[The] PCB constitution was changed to bring Sethi. Unfortunately, because of him, cricket has been ruined before and will be again,” he stated.

Imran also said that the Pakistan team had reached the final under former PCB chairman Ramiz Raja. “Ramiz Raja is an educated man, he understands cricket, what does Najam Sethi know?” questioned Imran. Meanwhile, lashing out at the coalition government’s economic policies, Imran Khan  warned that the country will default if it
does not enter into a
programme with the International Monetary Fund (IMF).

Addressing PTI workers and supports via video link, he said: “We have no other option but to enter the IMF programme.” He was flanked by former special assistant to the prime minister (SAPM) on poverty alleviation Dr Sania Nishtar.

Hitting hard the PML-N-led government’s economic policies, the deposed premier said over 0.75 million Pakistanis have left the county during the past seven months. “Industries are closing down due to the ongoing economic crisis.”

Inflation will further swell in days to come, he warned.

The PTI chief also urged the people not to leave the country in a difficult time, adding that nations fight together in hard times.

“My life is in danger but I will face [the challenges] by staying in the country,” he vowed, adding that they would fight in union against the “thieves” imposed on the country. “Standing up is the only way out of the disaster,” he told the nation.