* Starting with the moment so big, as the young musician, Brooklyn-based Pakistani Arooj Aftab bagged the first-ever Grammy award for the country out of the two nods she got 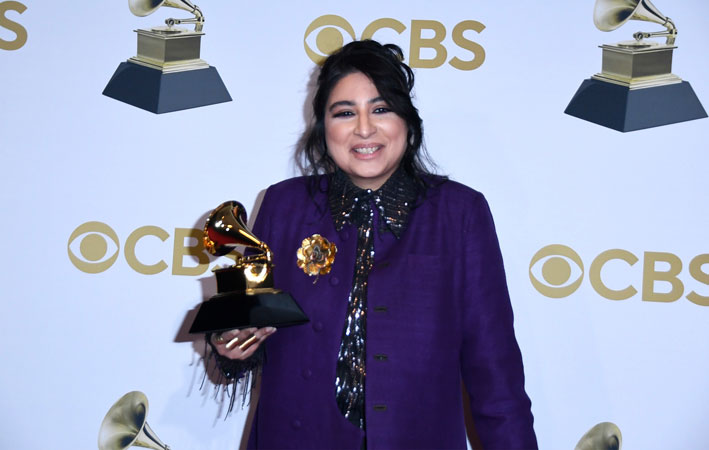 As we approach 2023 in a week, let us have a look at the year 2022 and the unprecedented achievements of Pakistan’s entertainment industry across the globe.

From the several milestone moments that happened this year, these seven undeniably top the list of feats that made Pakistan a pivotal and unmissable part of global entertainment.

AROOJ AFTAB BAGS GRAMMY FOR COUNTRY — starting with the moment so big, as the young musician, Brooklyn-based Pakistani Arooj Aftab bagged the first-ever Grammy award for the country out of the two nods she got. Aftab, who was nominated for ‘Best Global Performance’ and ‘Best New Artist’ with her song ‘Muhabbat’, claimed the prize for ‘Global Performance’.

‘PASOORI’ MADE THE WORLD DANCE — the ‘Coke Studio’ banger, ‘Pasoori’ by Ali Sethi and Shae Gill was the song of this year across the globe and made the world dance to the peppy beats and quirky lyrics. The record-breaking number with millions of YouTube views and Spotify streams, in addition to countless renditions and reel recreations across the globe, ‘Pasoori’ also topped Google Search in 2022, surpassing the K-Pop chart-topper ‘Butter’ by BTS.

FAWAD KHAN & MEHWISH HAYAT JOIN MCU — a number of our superstars went global with their talent and were featured on international platforms. However, the biggest accomplishment came in Pakistan’s debut on Marvel’s Cinematic Universe with A-list actors Mehwish Hayat and Fawad Khan. Khan and Hayat, in addition to Nimra Bucha and veteran Samina Ahmed, played pivotal roles in MCU’s mini-series ‘Ms Marvel’. The uber-talented Hayat played Aisha – the great-grandmother of protagonist Kamala Khan – whereas, the heartthrob played Hasan, her husband. The MCU debut of Pakistani stars was loved and acclaimed by viewers all over the world.

HUMAYUN SAEED MADE HIS WAY TO ‘THE CROWN’ — our very own superstar, Humayun Saeed paved his way to the hit web series ‘The Crown’ of streaming giant Netflix. He debuted in season five of the cult show which follows the controversial lives of British Royals. Saeed essayed Dr Hasnat Ahmed Khan, a British-Pakistani heart surgeon and a close friend of Princess Diana of Wales in ‘The Crown’.

‘JOYLAND’ ENTERS THE CANNES & OSCARS — Pakistan also made a debut at the prestigious Cannes film festival with Saim Sadiq’s feature film ‘Joyland’. The title triumphed over 13 other nominees to pick up the ‘jury prize’ in the ‘Un Certain Regard’ category as well as the ‘Queer Palm’ award in the festival. Moreover, the film received a prolonged standing ovation at Toronto Film Festival and is now officially nominated for the prestigious Academy Awards to represent the country at Oscars 2023.

LOCAL MUSIC CELEBRATED IN MARVEL FILM — apart from the actors and directors from Pakistan, the Marvel mini-series, ‘Ms Marvel’ also featured a lineup of songs from our emerging musicians, including Hasan Raheem, Eva B and others. Songs such as ‘Peechay Hutt’, ‘Ko Ko Korina’, Urdu rap ‘Rozi’ and ‘Sohniye I Love You’ among others were celebrated in different episodes of the series.

SAJAL ALY IN BRITISH ROM-COM — the super versatile star of Pakistan, Sajal Aly bagged herself a British film after a very successful stint in Bollywood. She signed Jemima Goldsmith’s ‘What’s Love Got to Do with It?’, helmed by Oscar and BAFTA-winning director Shekhar Kapur. The ‘cross-cultural’ rom-com about love and marriage, set between London and South Asia has already premiered at international film festivals and will release in the UK on January 27, 2023.

‘MERE HUMSAFAR’ WINS AUDIENCE ACROSS SOUTH ASIA — one of the hottest shows of this season or rather the year, ARY Digital’s ‘Mere Humsafar’ – headlined by A-list actors Farhan Saeed and Hania Aamir – smashed the TRP records across several countries. The 40-episode drama serial, directed by Qasim Ali Mureed, gained millions of YouTube views and a massive fanbase extended to India, Bangladesh and Nepal.

Which of these moments of Pakistan’s entertainment industry tops your list?