Terror to be responded with full force 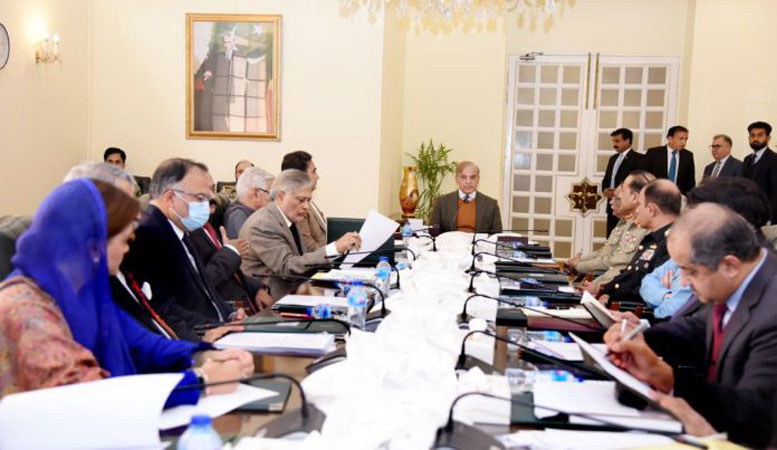 The National Security Committee (NSC) meeting Friday decided to turn up the heat on the militancy with relentless counter and preemptory measures to neutralise the threats present in the country in any form. In a statement, the Prime Minister Office said the NSC’s participants expressed an unequivocal opinion that Pakistan’s national interests will not be compromised and no one will be allowed to harm the national security.

Prime Minister Shehbaz Sharif chaired the NSC meeting, which was attended by services chiefs, intelligence heads, and federal ministers. The meeting came after the outlawed Tehreek-e-Taliban (TTP) announced an end to the ceasefire with Islamabad and ramped up attacks on security forces, especially in Khyber Pakhtunkhwa and Balochistan. Finance Minister Ishaq Dar briefed the participants about the economic situation and challenges of the country and briefed the participants about the economic strategy and measures adopted by the government.

The intelligence agencies gave a briefing on the overall law and order situation in the country and informed the meeting about the factors related to the recent wave of terrorism and the measures to deal with them. Minister of State for Foreign Affairs Hina Rabbani Khar briefed the meeting on the situation in Afghanistan and informed about Pakistan’s relations with the interim government of Afghanistan.

The government and state institutions resolved that Pakistan’s fundamental interests for existence, security and progress will be well-protected with bravery and lasting strategy. “Unequivocal opinion was expressed to defend the country’s national interests and not allow anyone to undermine the key concept of national security.” Participants of the meeting also paid tribute to the great sacrifices of martyrs and extended their condolences towards their families. It was determined in the meeting that terrorists are Pakistan’s enemies and the entire nation is united on the single narrative of standing against terrorism.

“Those challenging writ of the state will get a full force response,” the statement read. The NSC meeting will continue on Monday (January 2) in which further decisions will be taken in light of the proposals shared in Friday’s huddle. For the past few weeks, Pakistan has witnessed a fresh wave of terrorism with the most recent spate of terror attacks carried out in Balochistan and KP. The US, UK, Australia and Saudi Arabia have issued advisories, asking their nationals to restrict movements in Pakistan and avoid non-essential trips.

On Wednesday, Pakistan Army’s top brass resolved to uproot terrorism “without any distinction” as the country battles a fresh wave of insurgency, which has left many soldiers martyred and several others injured. Earlier this week, Prime Minister Shehbaz Sharif, too, reiterated his resolve to uproot the menace of terrorism by using all available resources. The premier said he would take all possible steps to control terrorism in all its forms in the country.