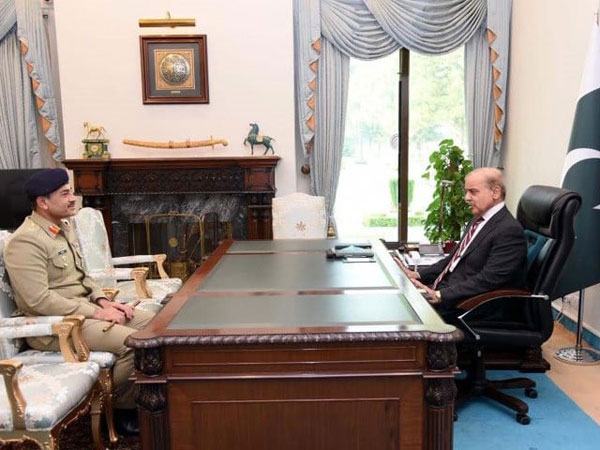 Chief of Army Staff (COAS) General Syed Asim Munir called on Prime Minister Shehbaz Sharif at the PM Office on Thursday and discussed prevailing law and order situation Amid spike in terrorist incidents in the country, a private TV channel reported. Gen Asim briefed the premier on the security situation of the country during the meeting. Reports said the National Security Committee (NSC) meeting, scheduled to be held on Friday, also came under discussion during the huddle. The high-powered NSC meeting will take a comprehensive review of the strategy in the wake of the ongoing surge in terrorist attacks. Also on Thursday, three soldiers of Pakistan Army were martyred and two terrorists killed in an intense exchange of fire in general area Arawali, Kurram district, on Thursday. The killed militants remained actively involved in terrorist activities against security forces, the Inter-Services Public Relations (ISPR) said. The army troops fought bravely and effectively engaged the terrorists, and recovered weapons and ammunition after killing them.The martyred soldiers included Subedar Shuja Muhammad (43), resident of Khairpur; Naik Muhammad Ramzan (32), resident of Khuzdar; and Sepoy Abdul Rehman (30), resident of Sukkur. The sanitization of the area was being carried out to kill terrorists, if any found in the area, ISPR said.

The Pakistan Army, it added, was determined to eliminate the menace of terrorism and such sacrifices of its brave soldiers further strengthened its resolve. In a tweet, Prime Minister Shehbaz said that the entire nation paid tribute to the soldiers martyred. “Undoubtedly, the sacrifices of the Pakistan Army soldiers for the protection of the country and the nation from terrorists are unforgettable,” he said. Meanwhile, President Arif Alvi extended heartfelt condolences and sympathies to the families of the bereaved and prayed for the high ranks of the martyrs. In a tweet, he reiterated Pakistan’s “unwavering commitment” toward eliminating the menace of terrorism and lauded the efforts of the security forces in this regard. Foreign Minister Bilawal Bhutto Zardari also expressed regret over the Kurram attack and paid tribute to the security forces. “Our war against terrorism will continue until the last terrorist standing is eliminated,” he said in a statement. “The martyred youths gave their lives for the nation, their sacrifice will not be forgotten.”

The incident comes as Pakistan is seeing an uptick in terrorist attacks across the country after the outlawed Tehreek-i-Taliban Pakistan ended its months-long ceasefire with the government last month. Recent weeks and months have seen a resurgence of militancy in Khyber Pakhtunkhwa, the southern belt, and merged districts, with increasing intensity of attacks on law enforcement personnel.