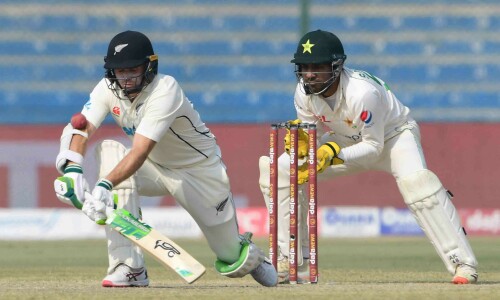 Tom Latham cracked a brilliant century Wednesday while fellow-opener Devon Conway missed out on one of his own by eight runs as New Zealand replied strongly to Pakistan on the third day of the first Test in Karachi.

Latham’s 13th hundred — the most by a New Zealand opener — took the visitors to 245-2 at lunch in reply to Pakistan’s first-innings total of 438.

The tourists now trail by 193 runs.

Kane Williamson, having overturned a leg-before decision against him, was unbeaten on 19, and Henry Nicholls on 10 after New Zealand resumed at 165 without loss.

He was finally dismissed for 113 after miscuing a reverse sweep and was caught in the slip.

Latham and Conway put on 183 for the first wicket, beating the New Zealand record against Pakistan of 181 set by openers Mark Richardson and Matthew Bell at Hamilton in 2001.

Conway was trapped leg before by spinner Nauman Ali for 92 after striking 14 boundaries in his fifth Test half-century.

The Pakistan camp has been hit by viral flu with neither skipper Babar Azam nor Agha Salman taking the field in Wednesday’s first session.