Above any political narrative: PDM responsible 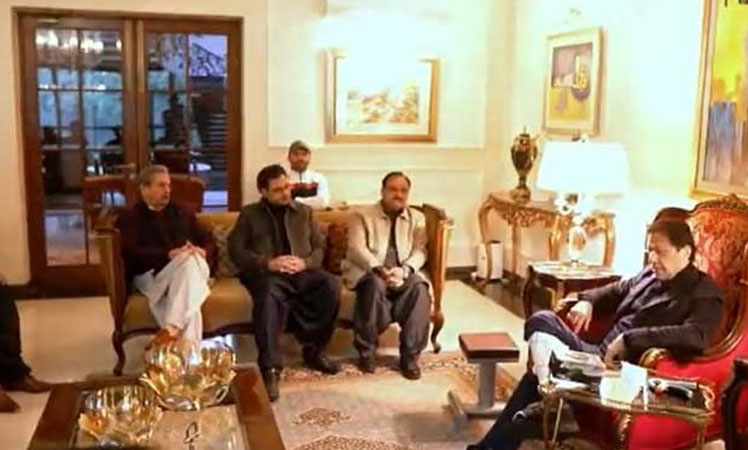 Pakistan Tehreek-e-Insaf Chairman Imran Khan Monday blamed the Pakistan Democratic Movement-led federal government for pushing the country towards “terror incidents”, saying the “incompetent rulers have miserably failed to protect the lives and property of the people”.

“After the economic crisis, there has been an extraordinary increase in the incidents of terrorism in the country,” he said while chairing a meeting of the party leadership in Lahore on Monday. “The imposed, corrupt and incompetent rulers are pushing the nation towards [terror] incidents,” Imran said, as he expressed serious concern over the rapidly rising terrorism incidents across the country.

The PTI chief’s comments on the state of terrorism in the country came at a time when the country is yet again witnessing a spate of terror attacks, particularly in the federal capital, Khyber Pakhtunkhwa and Balochistan. The two provinces have been under the radar of terror outfits.

Commenting on the state of national security, Imran Khan said, “Leaving national security on the mercy of [Asif] Zardari’s politically immature son is a criminal stupidity.” He said that his party is watching the situation closely. “[We] will strongly resist the efforts to expose the nation towards a major disaster,” he said.

The former prime minister said that the “corrupt, dishonest and incompetent rulers responsible for the economic chaos have now miserably failed to protect the lives and property of the people”. “Eight months ago, the country was economically stable while terrorism was practically over. These corrupt and dishonest people at the helm of affairs were given the power to play with the economy and national security and award themselves with NRO-2 (amnesty),” he added. “In recent days, the country has seen a 52% increase in terrorism incidents in which 270 people have died and more than 550 were injured. I had warned of the consequences before my government was changed through a conspiracy. Since the last eight months, we have continuously warned that the imposed, corrupt, and incompetent rulers were pushing the nation towards disaster,” Imran said. According to him, independent economic experts were suggesting that Pakistan was facing a very serious situation and added that a two-fold increase in the price of flour would most likely deprive millions of poor people of food. “After ruining the economy, the imported government failed to provide security, which is very worrying. Despite America’s withdrawal from the region, our government shielded the nation from its fallout with the best diplomatic strategy,” he added. He reiterated his demand for snap polls, which in his opinion was the only way to save the country from destruction. “Only a government with a public mandate in the true sense will be able to manage the economy and control terrorism”.

During the meeting, the PTI leaders discussed the strategy for the resignations of the PTI members of the National Assembly. The meeting condemned National Assembly Speaker Raja Pervaiz Ashraf for going on a foreign trip, knowing that the PTI MNAs were coming to meet him to verify their resignations. The participants termed the speaker’s act as an “insult” to the parliament. On this occasion, former finance minister and head of the PTI economic team Shaukat Tareen briefed the meeting about the impact of the increase in the prices of food items, especially flour, on the common man. The PTI leaders also showed concern over the United States and the European Union’s travel advisories for their citizens. It was reportedly decided during the huddle that all members of the Punjab Assembly from both parties will participate in the joint parliamentary party meeting on January 2 in which important decisions regarding Punjab will be made, including consultations on seat adjustments and Chief Minister Chaudhry Parvez Elahi’s vote of confidence.